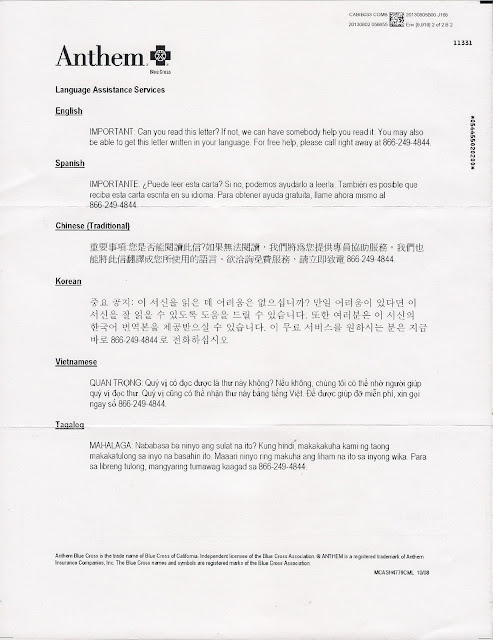 For every claim that I receive in the mail, statement of benefits or denial of benefits or bill for premiums from Anthem Blue Cross, I also get a sheet of paper that offers Language Assistance Services. Is this just in case a member of our family, even Sophie, might suddenly gain fluency in a language other than English? The fact that Anthem has the capacity to offer its estimable (questionable) "services" in English, Spanish, Chinese (Traditional), Korean, Vietnamese and Tagalog is secondary to the fact that we have never requested Language Assistance despite more than a decade of "membership" in that estimable health insurance company. If I were a math nerd, I'd figure out what one piece of paper costs and then multiply that cost by the approximate ten thousand sheets of Language Assistance Services paper that I've received over the years and then I would compare it to the ten thousand premium increases I've received "due to the spiraling costs of healthcare" and then I'd see if we're even. I'm not a math nerd, though, but rather a poetry one, so I'll just remark on the beauty of those Chinese (Traditional) symbols that hearken back to my days studying the language in college, the better to understand Li Po and Tu Fu. Then I'll throw it in the recycling bin where eventually it'll join its brethren in some giant dump before being churned out again.
Posted by Elizabeth at 4:53 PM