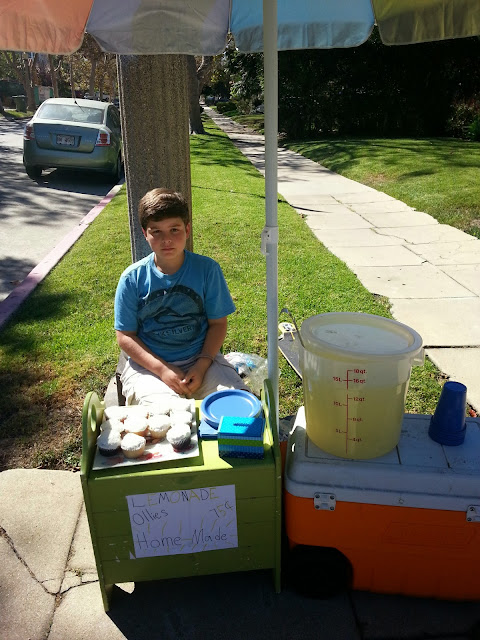 So, it's Sunday. I read about meteors flying over the mid-West, and Ted Cruz, the heinous Tea Bagger senator from Texas who won't give up his paycheck if the government is shut down but thinks it's all right that 800,000 soldiers will have theirs frozen. I fostered a pretty spirited debate on Facebook about the merits of the Affordable Care Act, and how it's going to help so many of us despite its problems. I feel nervous that the Tea Baggers are going to prevail and wish they'd all calm down and let the reform play out. I'm weary of the people who constantly whine about how our political discourse has disintegrated and wish they'd stop whining and say something in addition to how our political discourse has disintegrated. And yes, I'm perfectly aware that it's the Tea Party and not the Tea Baggers. They'll always be tea baggers to me, and I don't give a damn if it's offensive.

Oliver is outside hawking lemonade again and cupcakes, this time, in an effort to raise money for fishing supplies and the Epilepsy Foundation of Greater Los Angeles. I had a talk last night with a friend's boyfriend who told me about his fascinating youth, growing up in Nebraska, how he was always in trouble, on the road, really, to jail,  his unruly behavior in part due to what was later determined to be dyslexia. It all turned out fine -- more than fine -- and that turning out happened when he learned of his strengths, not his deficits, when his mother persevered, when he made drastic and dramatic changes in his life. I'm reading a book by Ben Foss called The Dyslexia Empowerment Plan, and it's illuminating. Sometimes, when I read Foss' descriptions of himself in childhood, I feel as if I'm reading about Oliver, and little by little my gut instincts about my remarkable child are affirmed. When Oliver was young -- let's say three or four -- he was already such a pistol, as my father would say, that we would shake our heads and laugh, ruefully. A neighbor who has a powerful job in publicity once told me that she is always nice to Oliver because one day we're all going to be working for him. The book is not about overcoming learning disabilities but finding one's strengths and recognizing that dyslexia -- disability -- is just part of one's identity, something to accept, to almost embrace. Simple -- but radical -- stuff.  I think, sometimes, that part of my job with Oliver is to literally get him through school and out, to support him in whatever way I can and to guide him to constantly see his strengths and pursue them.

I price my lemonade at $.75. he says. Because most people will give me a dollar and tell me to keep the change.

So, Ted Cruz? Overcome him like a disease. Oliver? Help him to accept his dyslexia and discover his strengths.

What's up with you, Reader?