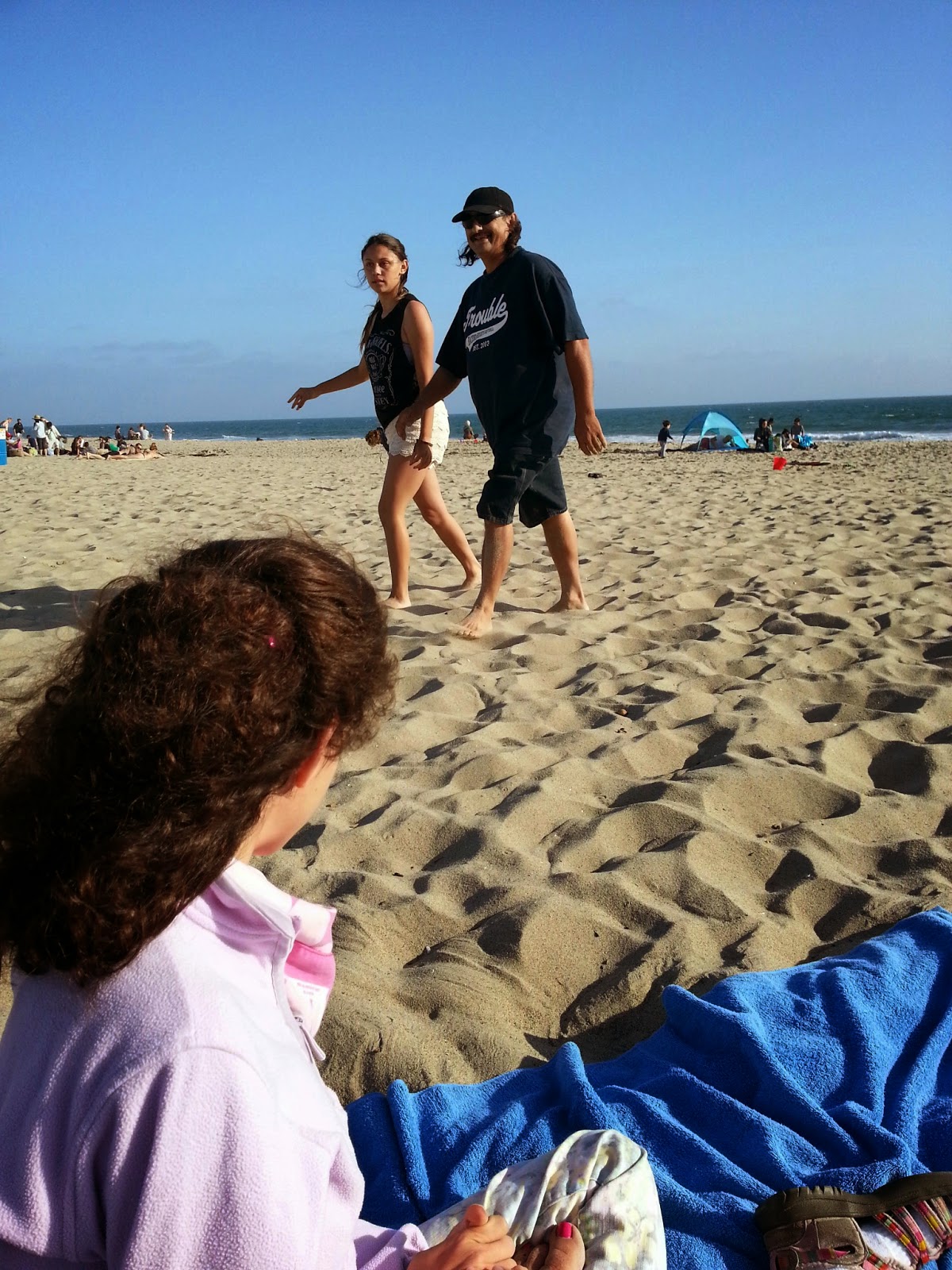 I don't know those people in the photo, but a week ago, when I took the photo, that was the about the fifth time that they had passed Sophie and me and stared, openly, at her. You can't see their children, either, all of whom openly stared with nary a remonstrance (how's that for a phrase) from their parents. I finally lifted my phone and snapped them, deciding that I would perhaps start a new hashtag. The #don'tstarepaparazzi.

Yesterday, as I struggled to push Sophie's wheelchair up over the curb -- remember, we don't have curb cuts on our street because the city of Los Angeles is taking its sweet time and only doing so in certain neighborhoods -- I felt beleaguered about feeling beleaguered. These are the times when the perpetuity of this caregiving job sort of overtakes the glory and honor of it all.

I pushed Sophie up the small hill that leads to the pathway that leads to our front door and stopped to rest for a moment. I was chatting with a friend from up the street. Multiple minivans were parked in front of my house, the vehicle of choice for the many Orthodox Jewish families that live in our area. They have lots of children because there is some kind of edict in the Old Testament that demands for them to multiply. I have no trouble with the Old Testament and have no trouble with the Orthodox other than a faint discomfort with the oppression of the females, but that could be the subject of another post where I could perhaps rope in my feelings about the current Pope of the Catholic Church who people love to lionize but who might actually be just another chip off the old Catholic block.

A neighbor was having a birthday party around the corner, hence the minivans. As I stood there, bitter and dark-humored, resting from care-giving in perpetuity, a woman who looked to be about twenty-five with a baby on her hip, pushing a stroller with another baby inside,  and three little children trailing her, walked right past us. The three little children trailing her stared at Sophie. One child stopped and swiveled her head, Exorcist-style and stared. Her sister scurried to catch up with her mother, her head turned owl-like, her eyes bugged out. The mother turned to call her trailing children to her minivan while I simultaneously reassured the children Hi, there! It's okay to say hello! Her name is Sophie! No one said anything, not even the mother. Sure, she might have been exhausted having just hauled her five children to a birthday party with the rest of the day ahead of her. She might have sensed that I was a Bitter and Dark Humored Caregiver in Perpetuity. She and her three hundred children scurried into their minivan, the automatic door swung shut and they were off, leaving me to my bitter thoughts.

I might have thrown back my head and howled the laugh of the maniac. Yeah! I might have cried, Keep that ridiculous wig on, covering your shameful sexuality! And you, little girl, keep staring! One day, if you choose to stay in the faith to which you've been born, you'll be stared at, too! If your mother keeps having babies, you'll be bound to have a sibling that will have something worthy of staring! I might have grabbed my phone and taken a picture, labeled it #don'tstarepaparazzi.

Instead, I pushed Sophie up the path to the front door and went inside.

Posted by Elizabeth at 8:47 AM