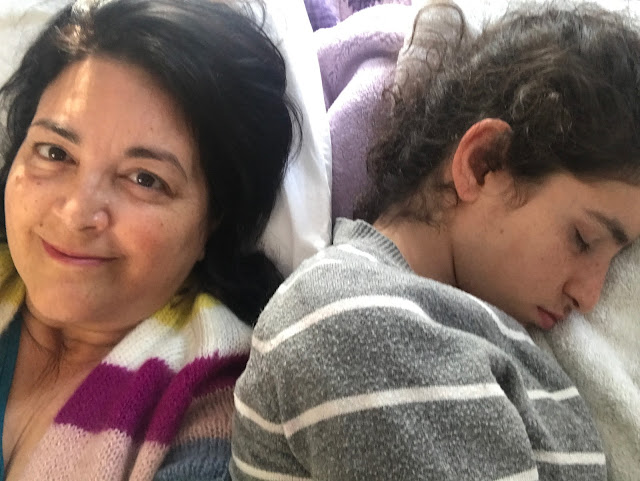 The new doc was a nice guy, even though he was about twelve years old. I appreciate that his practice, at a major medical center here in the City of Angels, has a significant number of young adults with developmental disabilities. I'm older than I look, he assured me at some point during the initial visit. I have three children. Generally, these visits consist of The Doctor asking me a whole lot of questions whose answers are duly noted in chicken scratch on the clipboard he or she sports. Nowadays, there's a keyboard and a computer screen that's always facing away from The Mother and The Patient. I'm not sure why this is so, but given the mundanity of the questions and the number of times in The History of Sophie, Inc. that I've answered them, I like to imagine that Sophie's file is flagged with some kind of red banner or star that stands for Noncompliant Mother. I like to imagine that it says somewhere in the reams of "information" it purports to have regarding my darling daughter that there's anecdotal evidence of seizure control success with cannabis medicine, but mother is a bit on the aggressive side so shouldn't be supported because it'll go to her tiny little mother mind™ and blow it up. I like to imagine a banner running across the screen that says, We have not helped this person in the 23 years that we've been treating her, but pretend like you know what you're doing.  Mother historically has been correct about her daughter and mainly appreciates kindness and honesty. To be fair, this was a Doctor and not a Neurologist, and like I said he was kind and direct and spoke to Sophie like she existed and I feel a bit of relief that we perhaps have finally found a physician that will coordinate her care, when it's needed. When it's needed is the operative phrase here, and it's been my experience that we're sort of held in thrall to the medical system, that we're a bit enslaved to its protocols and rules and regulations. But, I digress. The Doctor asked all the right questions for a bit and was respectful of my wish to not vaccinate Sophie. When he suggested that she should be tested for immunity to hepatitis, I reminded him that she would have no immunity, since she is no longer vaccinated, and then he suggested that she should be vaccinated with that and with the flu vaccine as well since the risk of complications and death from those diseases is so great, and I wanted to tell The Doctor that I feared Sophie's death every single goddamn day, and it wasn't from the flu or hepatitis, but that I'd also reached a sort of equanimity about it all, at least the death and absurdity part, but instead I demurred and gave a 16th century smile. When he asked whether Sophie was sexually active, I pulled the sword out of the scabbard at my waist and cleaved the keyboard in two, right between his legs, missing the member that had given him the three children, of course, because my aim is always true. Then I took a hold of Sophie's wheelchair and rolled out of the examining room.
Posted by Elizabeth at 7:36 PM