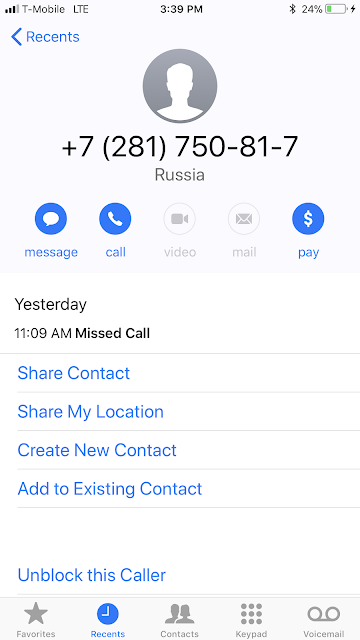 So, I’ve got an interesting twist on yesterday’s post. This morning I learned that the man who had wished for me to be “sterilized” when I stated my antipathy to guns (I actually called for them to be melted. I was emotional) on a friend’s thread on Facebook, was actually not a man at all. I had joked to another commenter also insulted that he might not even be a person, but, rather, a Russian bot. Reader, I don’t know what the hell a Russian bot is, but we use language like this now. Willy nilly. Apparently, someone was impersonating my friend’s friend — was it a hack job or a Russian bot?

The world is ugly and the people are sad. Piles of dead children are growing.

Someone from Russia tried to reach me yesterday. There’s a screenshot of the number.

What is going on?
Posted by Elizabeth at 3:58 PM