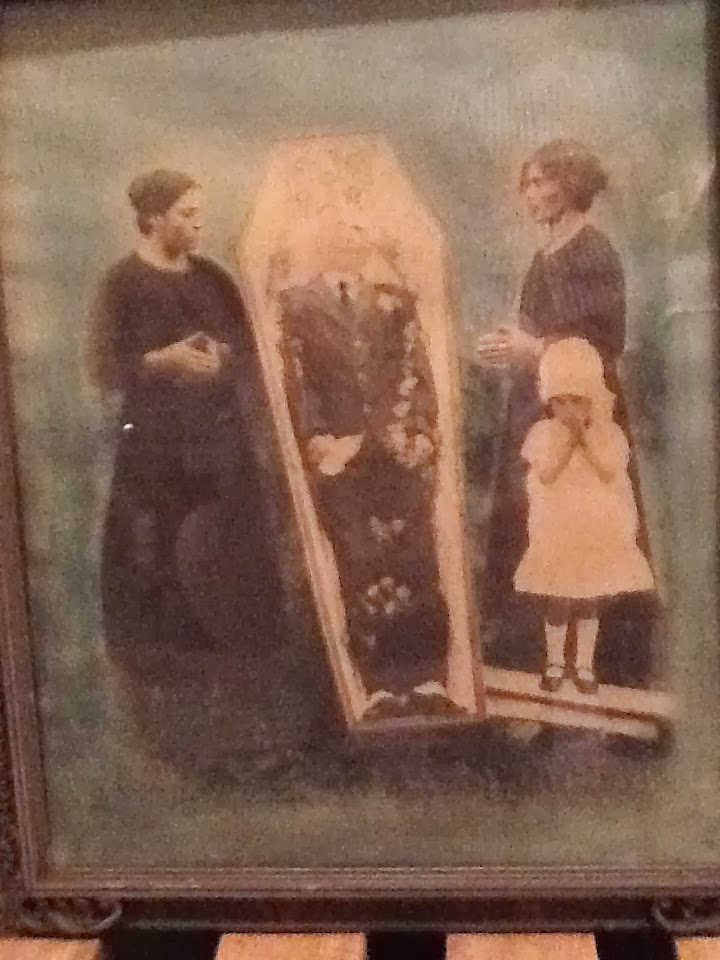 The first dead person I saw was my grandmother in her open coffin when I was twenty-five years old. That doesn't count the shadow of a dead person I might have seen when I was sixteen years old, the flash of blonde hair through the windshield, the eyes, before our cars were irretrievably smashed together. Like I said, I'm not sure that I really saw this or imagined it, afterward, as I recovered. That is another story. I walked up to my grandmother's coffin holding my father's hand tightly. I've never seen a dead person, I said to him, right before we reached his mother and bent over to kiss her cold cheek. I know he wouldn't have said it then, but at some point afterward my father said, How could you never have seen a dead person? I probably saw scores of dead people before I was half your age! That photo above is some dead relative of mine. The little girl, perched on the stool, is my aunt, the woman behind her my grandmother.Perhaps that is my great-grandfather. Evidently, posing with your dead relatives was a common thing in southern Italian culture. And my father apparently posed in much the same way as my aunt, many times during his childhood. They were accustomed to death.

When I show this photo to people, they peer at it and wonder if it's real. Death. We don't like to think about it very often, we do our damn best to avoid it, and when it comes we're shocked, shocked. Sex and death. We're shocked by both. And we certainly don't write about it until we do.

I am an animal today, pacing my cage or circling the tightrope walker above me. She doesn't see me, doesn't remember how she shed her tutu, plunged from the wire, naked, and wriggled into this skin. How do I get back? Where is the Master of Ceremonies? Sometimes we need the proverbial provocation -- the stick, the prod, a crack of the whip, the leap, a roar, talons unsheathed, the naked body devoured or devouring the beast.
Posted by Elizabeth at 2:13 PM