I went on a walk today and took the above very blurry photo with my phone. The flowers were, in reality, crisp and yellow and white, sprouting up from some dirt on the top of a wall. They came out blurry, though. Yesterday, I went to the eye doctor because my eyes have felt weird of late. I've been near-sighted since the age of six and have worn either glasses or contact lenses every waking moment of every single day since then. My left eye, in particular, has been irritating me for weeks. I've rubbed and blinked, changed my lenses, peered up into the light with my glasses to see whether it's just a smudge or not. I've wondered if I need reading glasses; I've thought, for a moment, that I might have The Diabetes (that's how my old southern friends say it in a thick accent), because isn't blurry vision a symptom? I didn't go there for too long, though, and finally made an appointment to see the eye doctor. She did all those little tests, made me peer into a machine and look down a long farm road at a little red barn that lay at the end. It looked sort of like this but the road was longer, the perspective more precise: 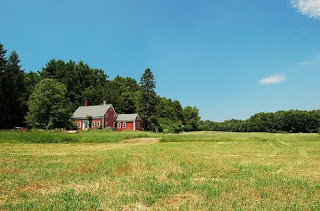 I love that little picture, I said to her. She laughed, and I wondered how much older than her I was and whether she thought I was weird. Then she put some yellow dye in my eyes and peered at them through that giant black machine.

Look straight ahead, she said, and she shone a blinding light into my eyes.

She even flipped my eyelids or made them go inside-out so that she could see better. That reminded me of a kid who rode the bus with us in Atlanta named Milton Friedman. Milton was what we called coo-coo in those days and he would turn his eyelids inside out and run around making everyone scream. He was poor, lived in a house with white, peeling paint, the dirt yard leading up to it blurry with rusty tools and furniture. My sister and I remembered him when we talked on the telephone the other day, so his name was still fresh in my mind. After mentioning how much I loved the little photo in the eye machine, though, I didn't mention Milton Friedman to the eye doctor, and at some point in her examination of my eyelids, she said Your eyes are a bit dry with the emphasis on the word are. Evidently, I learned, one's eyes become a bit dry if one is peri-menopausal. Even though I wanted to say F%$# you! to the nice, young optometrist, I conceded that this might be happening but that it seems to have literally happened overnight, or at least in the same amount of time that my son Henry has turned from a boy to a teenager which is about four minutes, tops. Time goes so fast these days that it's no wonder everything seems a bit blurry. Sophie is doing so much better that it's a bit of a blur and I've refrained from even writing about or speaking of it because as always I'm superstitious and don't want to jinx the turnaround. So don't say anything direct about that all right? I'm more sharp around the edges when things are going badly; there's a clarity to my days, I get through them with a precise force.

It turns out that along with the dry eyed, pre-menopausal business, my prescription has changed subtly so I'm getting new glasses and new contact lenses. Things should be clearer then. Right now, I'm blinking a bit, trying to find a balance, taking stock in the blur.
Posted by Elizabeth at 5:13 PM