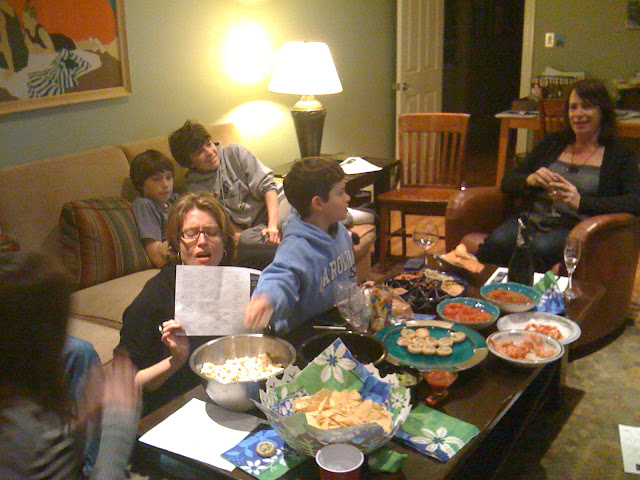 Wasn't that just about the weakest, most lame Oscar ceremony ever?

Here in La-La Land, we hear the helicopters rounding up over the hills all afternoon. The Husband nearly always has a party to work (he used to be Wolfgang Puck's Executive Chef for catering and did the Governor's Ball every year!), so I walked around the corner to our neighbor's house to watch the shindig. Because it's mid-afternoon, here, when it all starts, the kids come, too. We fill out those forms and have a contest to see who picks the most winners. We eat trashy food and catcall, some years more than others. It was that kind of year. I just told a good friend that it was either a sign that I was just getting too old or that I'm profoundly depressed, but I didn't care about any of it this year. Not even the gowns. O.K., I did like Cate Blanchett's weird yellow and pink thing. And Javier Bardem looked ghastly in white but divine in black. And Annette Bening was my favorite -- mainly because of those green drop earrings she had on. I hated The Social Network, so any time they won anything, I got busy feeding Sophie. And while I enjoyed The King's Speech and love Colin Firth like 99% of other women, the movie didn't knock my socks off or anything. Anne Hathaway is darn cute, but she was an AWFUL host, and I just couldn't wrap my brain around the whole world watching it. In a dark moment, I might have muttered that it was just another sign of the decline of the empire, American, that is -- and when the two folks won Best Documentary for The Inside Job, which I'm sure is an excellent one, and they made their clever comment about how none of the bankers that masterminded the spectacular fall of Wall Street two years ago were in jail, yet, and everyone in the star-studded, powers-that-be audience tittered and clapped -- well, that made me squirm in my seat and feel embarrassed.

In fact, the highlight was seeing those cute kids from PS22 sing Somewhere Over the Rainbow because they, at least, still seemed pure and in love with entertainment.

And I still don't know whether it's all because I'm getting old or because I'm profoundly depressed, but I think it's a bit of both.
Posted by Elizabeth at 9:26 PM

Email ThisBlogThis!Share to TwitterShare to FacebookShare to Pinterest
Labels: Oscars