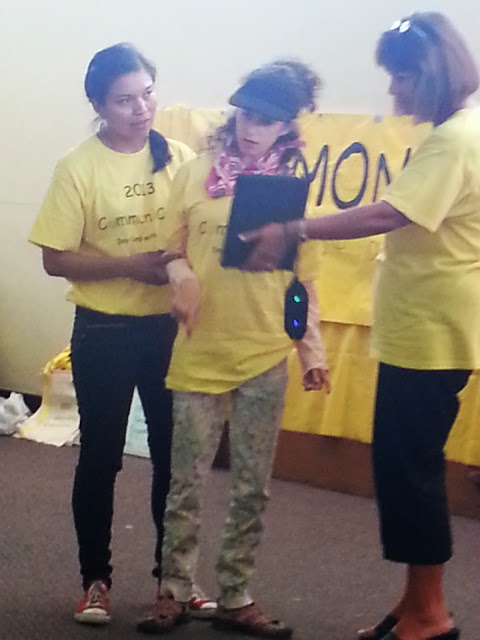 Another crazy, beautiful day in southern California, and I just feel crazy. I went down to Redondo Beach early this morning to watch the final ceremonies of Sophie's Communicamp. As some of you might remember who've been reading here for a while, this is a week or two of communication camp for children and young adults who use augmentative devices instead of speech to communicate. You can read my first post about it here.  Because Sophie can walk, she chose to introduce each performer by tapping her iPad. In the interest of privacy, I won't put up any more photos of the other kids, but there were wondrous things unfolding and tears falling. My favorite boy uses his right heel to tap a switch, and when he hears the recorded message, his face lights up in the most beautiful smile. Another boy did a stand-up (or sit-down) comedy routine with jokes that he told by tapping a switch with his elbow.

These aren't miracles, people, and one shouldn't jump to the colloquial how inspiring, what heroes, etc. etc. These are real people with real needs and a way to communicate them. When you find yourself talking about technology in a disparaging manner, remember these children and their ability to be in the world and not on the sidelines.

I followed up the Communicamp Final Production with a mosey down Lincoln Blvd and then Abbott Kinney to another medical marijuana pharmacy with an f. I had gotten a lead on this one perhaps having what I need -- a higher ratio tincture of CBD/THC.

Well, it didn't have it.

I got back in my car and started home, meandering through the small beach towns that dot the coast. I shed tears, a small in-car pity party: how am I going to find the right strain for Sophie? Why don't I live as carefree as that girl on her bright yellow bike with the basket? Or that man with his surfboard slung over his shoulder? Why don't we live in a beach town? What am I doing with my life? What the hell?