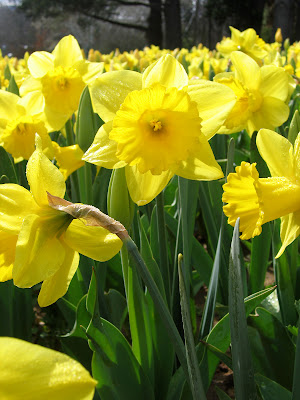 We woke this morning to baskets of candy and toys. Henry fed Sophie a piece of a yellow marshmallow chick, the Peeps that are absolutely necessary in any Easter basket that the bunny brings to a house where I live (I hate those things but they're from childhood, after all, and tradition must be honored). Then The Boys and I left for church. We had planned on going as a family, but as things go, The Girl had a seizure and had to stay at home with The Husband. Her lavender bathrobe bunched up under her chin, she was sleeping when I bent over her and kissed her good-bye.

The Boys ran upstairs to the balcony, where hordes of the youngest children and their parents generally sit, but because I believe that I've graduated from the noisy, hot atmosphere of the balcony, I chose to stand downstairs toward the front of the church in the side aisle. I waved and smiled up at the boys as Mass began.

Easter Mass is joyous and jubilant whatever the strength of one's faith. I lifted my eyes and noticed, again, something different in the beautiful church that I have been a member of for at least eight years. Up, up, up at the highest cross-point (and my church architecture language is atrocious, I'm sure) were what looked like wooden symbols -- a shamrock, a funny pointed star, a circle (I think) at even intervals all round. They were the most beautiful green and looked even more startling against the dazzling stained glass windows, whose beauty lies more in cliche, I think, that also ring the church.

As the priest spoke and opened the mass, my thoughts went back to Sophie, purple (the color of Easter) in her bed, and I felt the prick of tears in my eyes and the stirrings of sadness and maybe a little self-pity. I couldn't catch myself -- and like the cliched windows, as the music soared around me, my tears started falling and I had to wipe them with my fingers and blink them away.

I got a hold (is that the expression?) of myself and stood, listening and singing and praying until the priest, one of my favorites, began his sermon. It was the usual Easter Sunday talk, complete with the real meaning of Easter, the Resurrection and what it's all about. But then the priest spoke of complaining and suffering and in some roundabout way spoke of gratitude and recognizing what is good. We all know from popular culture, pop Buddhism, Oprah, even, that listing the things one is grateful for can be a necessary step toward more happiness. In a simple way, the priest reminded us to be grateful for something quickly, right after a negative thought or emotion. He spoke of neurons and how negative thoughts, trauma and emotions are imprinted in the brain but how we can also imprint the positive as well. I remember reading about this somewhere and I realized that I'd forgotten it. That I often forget to be grateful.

I have forgotten in my sadness how happy I am as well.

I thought of Sophie in her purple robe at home, unable to be with us on Easter Sunday (along with The Husband) and felt sad. But my sons were beaming and waving at me up in the balcony, and at the end of Mass, I got to hold the most beautiful baby of a friend of mine. A little girl with a smocked pale pink dress and a tiny pearl bracelet on her chubby wrist. A little baby who fit just right on my hip and smelled like lavender when I bent my head to the soft hair on her round head. She reached her hand up, just like Sophie and touched my cheek and opened her eyes wide. When I handed this perfect child back to her mother (who has also suffered unspeakable grief), I thanked her and told her that though my own daughter could not be with me, holding her daughter was my Easter gift.

Here's a poem that celebrates the day as well:


A Prayer for the Self

Who am I worthless that You spent such pains
and take may pains again?

I do not understand; but I believe.
Jonquils respond with wit to the teasing breeze.

Induct me down my secrets. Stiffen this heart
to stand their horrifying cries, O cushion
the first the second shocks, will to a halt
in mid-air there demons who would be at me.

May fade before, sweet morning on sweet morning,
I wake my dreams, my fan-mail go astray,
and do me little goods I have not thought of,
ingenious & beneficial Father.

Ease in their passing my beloved friends,
all others too I have cared for in a travelling life,
anyone anywhere indeed. Lift up
sober toward truth a scared self-estimate.