She in There, She Know, Part 2 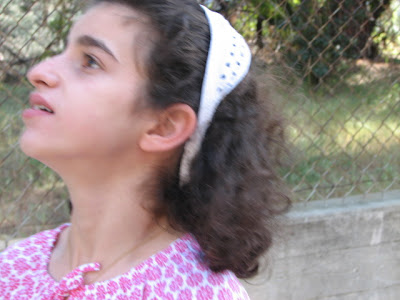 I've been meaning to update you on what's going on with The Girl, but despite the thoughts swirling around my head constantly, I'm hesitant to write it all down. What I will write is that the new drug is not working for Sophie and that we're on a wean schedule right now. She should be off of it completely in a few weeks. Weaning is hideous -- despite the fact that it's not helping the seizures, the brain is still somehow accustomed to it and a slow withdrawal is necessary. We've done this over fifteen times, and it ain't pretty.

In the meantime, The Neurologist suspects that Sophie is having a recurrence of a syndrome called ESES (electrical status epilepticus in slow wave sleep) which she had over four years ago. Outside of her diagnosis, this period was the worst experience we had had, so you can figure that I'm pretty upset about the idea of recurrence. We are waiting for a bed at the hospital so that Sophie can have an overnight EEG to determine whether ESES is back (it can only be diagnosed through a sleep study). Again, I won't bore you with the details. It just overall sucks.

On the bright side, the weaning of the useless drug isn't going too badly and Sophie is actually BETTER without it. Go figure. I also have an appointment all lined up in Arizona with a famous homeopath who saved our lives the last time Sophie went through this. The appointment is at the end of May. More on that later.

Finally, the gist of this post is to tell you what The Neurologist said the other day when we were talking about this new situation.

ME: Dr., I just don't understand all of this -- I feel obsessed by it and I'm constantly fighting my own feelings of helplessness. It seems that no matter what I do, what we do, Sophie is the same. What I really don't understand is why she is who she is. So full of something, her self, despite all these seizures. It's what drives me and why I can't stop. Her eyes are full of...

THE NEUROLOGIST: Sophie's genetics have determined that her brain is extremely intelligent. That explains why despite all these seizures she's done remarkable things and why she has so much expression.

I'm weeping, now, when she says this because it's just so AFFIRMATIVE. I hate that I need this affirmation from a scientist, but I do. I do.

The Chinese doctor says, "She in there. She know."

But The Neurologist says it, too.