I forgot to mention that we had an appointment today for an EEG. This wasn't an emergency or anything, just an attempt to get more information, try to figure out what the hell is going on with Sophie's dysfunctional brain. She's had a million and one of these things and they never tell us anything other than that her brain is incredibly dysfunctional. Honestly, I don't know why I keep doing them.

"It's better to cover all the bases," The Husband remarked the other day. "That way you won't regret NOT doing something."

Wise words to remember when I am tempted to rue the day we tried the new drug. The update on Banzel is that it's just not working. Sophie is on the full dose and feels drowsy much of the day. You might think that's not so bad except for the fact that when she's not sleeping, she's seizing. I'm starting to think that the constant state of drowsiness might be causing the seizures. Sometimes I hold those tiny orange pills up to my eyeball and wonder if perhaps they're really just made of sugar. Anyway, The Neurologist was on vacation so we decided to just start weaning the drug. I've taken a tiny bit away and we'll sit here for a while and reassess. (I've also started taking her back to the Chinese Doctor who is giving me those nasty teas that I wrote about here).

Anyway, back to the EEG. We went to a large hospital here in Los Angeles, a different place than we usually use. I waited for almost an hour after we arrived for our appointment on time (no surprises there) but it gave me a chance to jot down some notes (thank God for writing and for blogs). Here are a few of them:

1. our descent into the lowest depths of the parking garage was epic -- I don't think I've ever driven round and round so far down ever and I was struck by that symbolism

2. when I entered the hospital I was particularly mindful of my physical reactions -- a sort of PTSD -- beating heart, short breaths -- it always surprises me how sensitive my body is

3. I pushed Sophie in her stroller wheelchair for what seemed like forever through a labyrinth of corridors and hallways. When I glanced to the right and left through doors with ominous sounding names I thought of that wonderful phrase THE PROCESSION OF THE DAMNED

4. a young adult, a boy, in a wheelchair in the neurology waiting room with his over sized mother. His shoes were black and enormous and he wore a white terry cloth bib

5. a girl like Sophie in a brown velour track suit with a tilted head and wild eyes

We went into the EEG room and an incredibly efficient Egyptian technician ( I asked him where he was from and he told me) named Alex proceeded to glue the electrodes on Sophie's head while I held her head down. Which leads me to the main point of this entire post -- sorry for the incredible number of digressions --

When are these people going to come up with a better adhesive than glue for the electrodes? 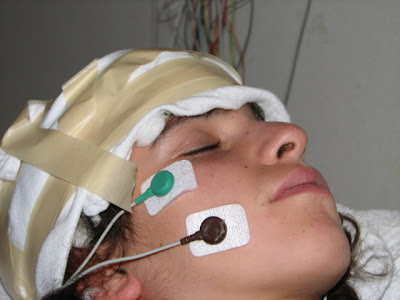 The reason for the shot above is not exploitation but to demonstrate that they use COMMON MASKING TAPE to hold the gauze in place that, in turn, assures that the electrodes won't fall/be pulled out. I wish I'd had a movie camera to show you how efficiently this guy ripped up that roll of masking tape. He would pull a strip off, tear it with his fingers and STICK IT TO THE WALL. Then we had enough strips, he just started wrapping them around and around Sophie's head.

"Watch her hair, please," I said at some point. He paid no attention but I didn't really mind because it was just so damn absurd.

You'd think that if we have the ability to read brainwaves -- hell, I'd go further and say talk on cellphones -- someone would have thought of an easy wash-away glue for administering EEGs. As it is, Sophie will have the stuff flaking from her hair and scalp for weeks.

As for the masking tape, my very funny friend compared it to the duct tape that they used on some space shuttle. And we know what happened to that.