So, today I drove to Santa Monica with my friend Shannon to listen to the great Buddhist psychotherapist, Dr. Mark Epstein. I imagine many of you know his books -- there's Going to Pieces Without Falling Apart and there's Psychotherapy without the Self: A Buddhist Perspective, and also Thoughts Without a Thinker. His new book is called The Trauma of Everyday Life. After being introduced by the equally great Jack Kornfield, Epstein read many passages from his new book, told us stories and led us in a 10 minute sitting meditation that included turning ON our cell phones and then listening throughout those ten minutes. Mindful listening to the beeps and whirs and pings and rings from hundreds of people's cell phones was incredibly interesting and, at least for me, hilarious. It made me realize, again, that we are not our thoughts, that the values and judgments we impose on circumstances are just that: impositions. I'm not sure that I articulated that in the best way -- what struck me is that while we normally are highly irritated when we hear cell phones go off in quiet rooms, looking at them as intrusive, when instructed to do so, to just listen and almost welcome the sounds, the experience became light, easy, even funny.

So where's the re-post? I thought the following post from almost exactly a  year ago, that I found when I searched the blog for Mark Epstein, was perfect to post here, especially in light of the comment exchange that we had here the other day with a fellow blogger who wondered how some people "cope" better than others. I still maintain that "coping" -- particularly with trauma -- is not something done "well" or "better" than others, but that the practice of mindfulness meditation is profound and life-changing. 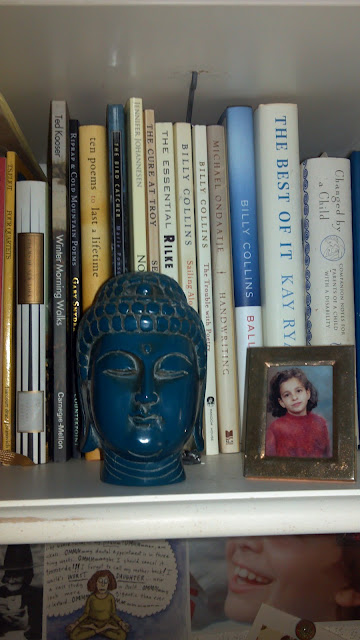 I'm not sure I've ever written about the first mindfulness meditation class that I took about fourteen years ago when Henry was a newborn baby and Sophie, a screaming for unknown reason three year old with uncontrolled seizures. I look back on many phases of my life since my children were born and wonder how in the hell I got through them, but here I am. Through them and sort of, kind of, prepared for the next phase.One of the things that helped me most, that didn't just help me, actually, but transformed me was a class called Mindfulness Meditation for Stress Reduction. Each week, I traveled to the deep, dark San Fernando Valley for a three hour class with a group of people whose problems included chronic pain, depression, severe illness, trauma and post-traumatic stress syndrome. We were taught the basics of mindfulness meditation and the practice of sitting, as well as the benefits of utilizing the principles throughout one's daily life.I'm not a master at meditation, but I know that the practice enables me to cope in far better ways than the frantic pleading and praying I did previously. For me, there had been so much dread in the practice of a religion with no resonance, and when I began to meditate, I finally found a bit of the peace and connection with divine love that I had only read about. More importantly, though, the practice of meditation helps me to deal with nearly everything difficult and challenging -- it doesn't make anything not difficult or challenging, but  somehow, almost by stealth, the seemingly impossible becomes possible.
Posted by Elizabeth at 7:20 PM