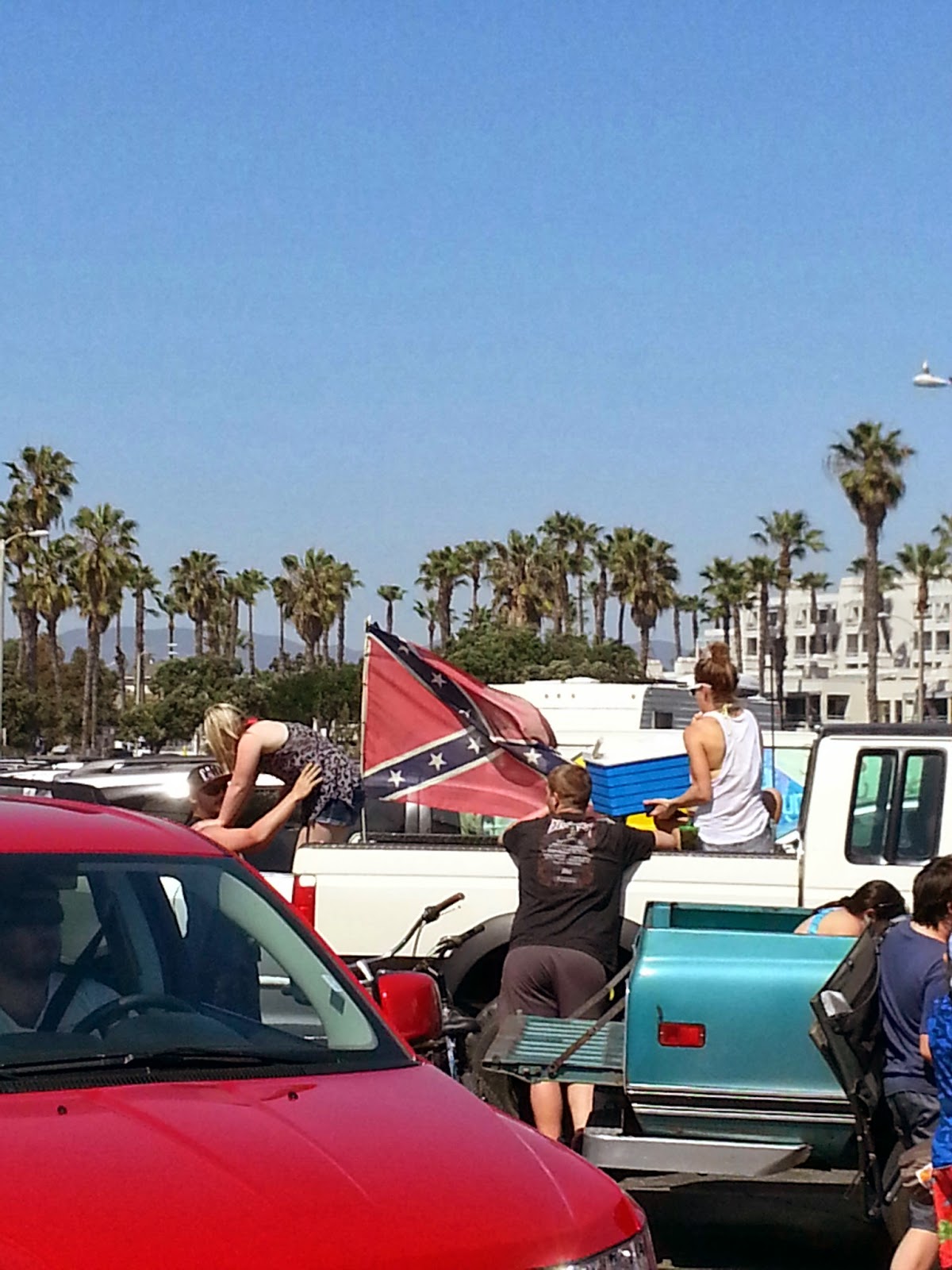 I hate to sully the pages of the blog with the photo above, but it struck me today that it's the perfect adornment for the mind creates the abyss, the heart crosses it. Those words are Sri Nisargadatta's -- an Indian philosopher, spiritual teacher and guru, and they appeared in my inbox this morning. When the giant pick-up truck pulled into the parking space a couple spaces over from mine yesterday, I was sitting in the back seat of the car, reading. It was a glorious day in Santa Monica, a quintessential southern California day, and the beach was packed. I had sat in the sun too long the weekend before and gotten a nasty sunburn on my neck and shoulders, so I dropped Sophie and Mirtha off to walk and stretched out in the back seat with my book, the first of Armistead Maupin's Tales of the City. When I looked up to muse about my life -- all its incongruities -- the Confederate flag fluttered into view, and I thought at first it was part of a movie shoot. I grew up in the south, and it's not an unfamiliar sight there -- flying stubbornly off of houses and trucks on the backroads of the country with all its menacing history, but on the shimmery coast of southern California, it's virtually unknown. You'll have to forgive my pious intake of breath. The beaches here are public -- the entire coastline is public -- and on a sunny winter day in Santa Monica, the variety of people out enjoying themselves is staggering. There are Latino families and aging surfers, middle-aged women in bikinis on roller-blades, RVs parked in handicapped spaces with stuffed animals hanging off of bumpers and old men in lawn chairs sitting on the roofs of cars. There are families of gods and goddesses, and eighty year old muscle men in tiny bikini shorts. There are tourists who stumble through the light, uncomprehending that this is where people actually live. I have never seen a Confederate flag flying, though, so I got out of the car, curious, and took a picture when I realized it was not a shoot but a real group of people. I confess to wondering what the two dark guys sitting on the concrete barrier where pavement turns to sand thought about it. Someone asked me later whether anyone had said anything, had been anything but passive. I told her that having grown up in the south, I wouldn't mess with those people, the type that fly Confederate flags, that they're mean, mean in the sense of stupidity, obdurate. There's something unfathomable about the obdurate, incongruous.

The mind creates the abyss, the heart crosses it.

There's no but between abyss and heart, only a comma, a pause. I have much that is incongruous in my life right now, some of it unfolding here, much of it unbloggable.  I am at once holding the match, looking over my shoulder -- pause -- and a pile of ashes, smoldering. The Confederate flag -- pause --  blue skies and a rainbow of people, beating hearts, thump. Thump -- pause -- thump.
Posted by Elizabeth at 11:44 AM