My NBC Dateline Notes and the Ode to Santos Dumont


First, and above all, how rocking cool are those Stanley Brothers? I know it's heretical, especially given their evangelical roots, but honestly, I'd be tempted to follow Jesus and the Apostles again if he were Joel Stanley and his band of brothers. That awesome female biochemist could be Mary to my Magdalene, too.

Secondly, how strong and rocking cool is that Paige Figi? And those women who lobbied the Virginia legislature? And their beautiful kids, the brave soldier with PTSD, the man with multiple sclerosis who threw his bag o'pharms on the floor?

You watched it, didn't you? If you missed the Dateline special, Growing Hope, you can still help out by supporting the Coalition for Access Now. Click on that link, and you'll be able to access your own legislators' emails and telephone numbers to express your support. I myself have just returned to the lobbying efforts. I had a hiatus, mainly because I despise lobbying and fundraising. It's very difficult for me to plead legislators to do the obvious. Unlike Paige and the women profiled on the show, I get stuck and fixate on -- well, for instance,  -- what appeared to be an entire Virginia legislature of white men in suits. Those guys did the right thing, but it's so hard that we have to literally beg for this stuff.

I'm girding my loins and calling the very estimable Senator Feinstein on Monday morning. She's decidedly not a white man in a suit, but she's said some worrisome things, and we need to tell her what we know. We need to share our stories. We need to plead with her. We want her to co-sponsor the Therapeutic Hemp Medical Access Act of 2015 (S.1333). Anybody out there who has an in to her office in Los Angeles or San Francisco? Please email me if you do.

Now let's talk about the proverbial thorns in the sides.

Thorn Number One in the Dateline special might be Dr. Amy Brooks Kayal. She's an epileptologist and the present head of the influential American Epilepsy Society. I recently read a letter she wrote to the governor of Pennsylvania, expressing her displeasure over any legislation favoring the legalization of CBD. At some point in the special tonight, she pointed out that parents are subject to the placebo effect and might be over-stating their children's response to Charlotte's Web. You might remember the doc at the Epilepsy Brain Summit that I sparred with said the exact same thing.

It's the Party Line.

I did the same thing that Mrs. Braddock did when Benjamin announced his marriage to Elaine.

The placebo effect argument drives me insane. I understand the power of the placebo effect, and I also find it interesting that the families who uproot themselves and move to states where cannabis is legal reportedly claim more success, but I question that research itself. Has anyone at the University of Southern California Neurology Department, other than my own wonderful neurologist, ever expressed any curiosity about the awesome success Sophie's had with CBD? Have they at UCLA where Sophie was treated for many years? Do they want to know? Has anyone done a study on revolutionary treatments and doctors' stubborn refusal to acknowledge change? When these doctors bring up the placebo effect, it stinks of patronization. I think of deer caught in headlights or steady blinking in the face of light.

They're not used to light. Bless their hearts.

Later, I engaged a bit with some other thorns -- those whoo I guess are called "haters" in the medical marijuana community. These people are, ironically, in the community in that they have loved ones who benefit from marijuana, but they consistently put down the Stanley Brothers, Realm of Caring and Paige Figi. Their concern is that CBD-only legislation will hurt the larger cause of making whole plant marijuana legal. They have some valid points, but they're often strident and make wild accusations. I know they're wrong. Just two years ago, I was wandering around Los Angeles looking for a product to give Sophie here in Los Angeles. We're now about to push through, hopefully, a bill in the federal government that will deschedule hemp, making it accessible to every citizen in every state, regardless of that state's marijuana laws. It's a small step, and it doesn't solve the larger problem of making sure that accessible natural plant medicine, including THC, is available to everyone who needs it. Cannabidiol alone is not a cure for everyone. There is much tweaking, and some people only see success when they add in THC and/or THCa. Some people are on so many antiepileptic drugs that success is elusive. It doesn't work for everyone, but there are thousands of children who need to try the product right now, who literally can't wait for what I believe will be the eventual legalization of marijuana on the federal level.

Today, I took Sophie over to LACMA to see the late Chris Burden's installation titled Ode to Santos Dumont. The museum states that the installation pays homage to ingenuity, optimism, and the persistence of experimentation, failure, and innovation. Inspired by Brazilian-born pioneer aviator Alberto Santos-Dumont, widely considered the father of aviation in France, the kinetic airship sculpture was recently completed after a decade of research and work by Burden.

It's a strange and wonderful installation -- a sort of translucent dirigible that is put into motion in some complicated way and then floats around the room for a bit in a constant sixty-foot circle. Sophie and I stood with a crowd of people and watched the beautiful thing float around and around. We were all mesmerized. The explanation on the wall states that if the airship were to deviate from its sity-foot circle, the geometry of the tethers would force the balloon to turn in a smaller, tighter circle, which would cause the motor to work harder. The thing always seeks the sixty-foot circle, the path of least resistance or the sweet spot.

How beautiful and resonant the Ode to Santos Dumont with Sophie, to this work we have ahead. 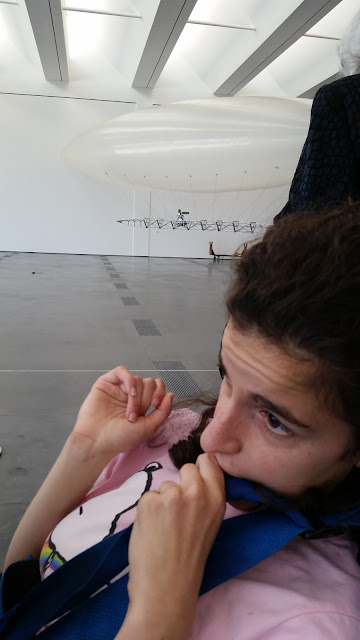 May we all find the sweet spot.