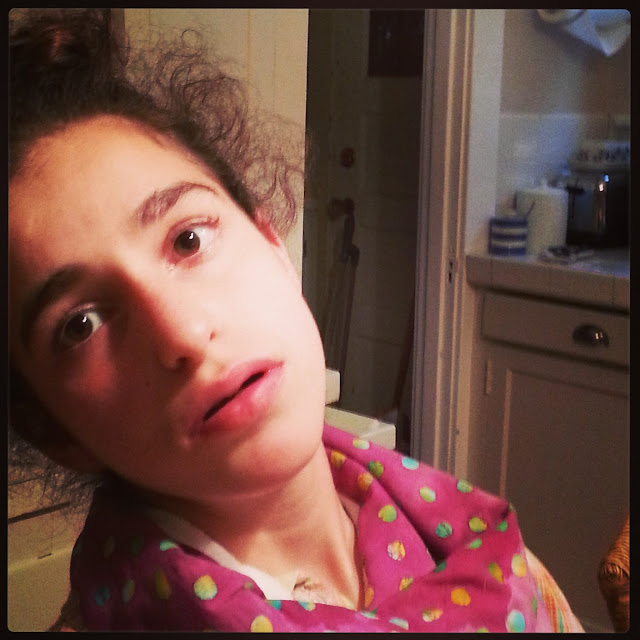 That's Sophie, and when her mind is clear and the seizures at bay, she can stare right into your soul. New readers should know that despite 22 medications and treatments, Sophie found no relief from tens of thousands of seizures over the first nineteen years of her life. When she began using Charlotte's Web in late 2013, her seizures lessened dramatically and that gaze became ever more penetrating and knowing. We're one of those families you've been hearing about, a family decimated by two decades of uncontrolled seizures, vicious side effects from powerful FDA and non-FDA approved antiepileptic drugs and then a radical reduction when cannbis oil is introduced.

Sophie is not alone. There are thousands of children like her, but they do not have access to CBD.

As her voice, I'm going to talk a little here about what's going on in Washington regarding CBD and hemp. There is a meeting on Wednesday, June 24th to determine the fate of CBD. This is the meeting of Senate members called the Caucus on International Narcotics Control. The Senate Caucus on International Narcotics Control was created to monitor and encourage against drug abuse and narcotics trafficking and to monitor and promote international compliance with narcotics control treaties.

As you can imagine, that's one scary and powerful group of senators.

How would something so benign as CBD end up in their caucus? Here's a metaphor: We're all in a giant swimming pool, swimming in our carefully marked lanes. The Stanley Brothers are just one swimmer in that pool, along with countless other people growing and making hemp products. There's lots of room. Pharmaceutical companies, namely GW Pharmaceuticals, a British behemoth, has a lane, too. They've working on Epidiolex. That's fine. They should have a lane. The really extraordinary swimmers, the lane where all the action is, though, is not this giant pharmaceutical company. The lane that literally came out of nowhere is our lane, and it's made up of hundreds of families whose lives have been changed by CBD -- whether it's Charlotte's Web or any number of strains of high CBD/low THC products. Keep that image in your head.

Here are some facts:

Who do you think is the strongest opponent of this process?

The strongest opponent of this process has been pharmaceutical companies, namely GW Pharmaceutical Company who stands to lose a large part of the market if CBD becomes a dietary supplement. In some states like Alabama and Florida, GW Pharmaceuticals is actually using state funds to pay for their expensive trials.

You do not need legislation to do a clinical trial. This could very well be a serious misappropriation of state and health department funds. Do you want your state paying the tab for a gazillion dollar company?

Here are some more facts:

Apparently, GW Pharmaceuticals is fine with cannabis legislation and efforts that would help them to line their pockets, but it's a stretch of the old imagination to imagine them wanting families to get access now to keep their loved one alive, especially if it cuts into their lane.

We're talking about room for everyone, here, a lane for all swimmers. GW Pharmaceuticals wants the whole damn pool.

At risk of sounding like a conspiracy theorist, let me tell you something.

Expect them to run their public relations and marketing campaigns (the pharmaceutical advertising budget is in the tens of billions) next on the basis of how wonderful their companies are, and insurance companies will follow suit, covering this "orphan drug" that will reap them untold profits.

In the proverbial nutshell, it looks like Big Pharma wants the whole shebang. It wants CBD to be a pharmaceutical. It's some scary shit.

As people who have been hurt again and again by a broken pharmaceutical system, we will not allow this to happen. You can't allow this to happen. If you think you don't care about CBD, that it's a limited component and that CBD legislation is destructive, think again. I hate to say it, but mark my words: these people will come after THC next. Can these powers be more powerful than the people? They are proving to be so.

We are Sophie's and countless other kids' voices, and we're swimming in a very big pool. We might very well get kicked out this week. Please help us fight for access. This is not about THC. That's another very worthy fight. This is about access to cannabis. It's about fighting the power. It's about doing the right thing. It's about being able to look back into your child's eyes and have them look right into your own soul.

*This post was co-authored by Heather Jackson, Executive Director, Realm of Caring Foundation

Posted by Elizabeth at 2:00 AM