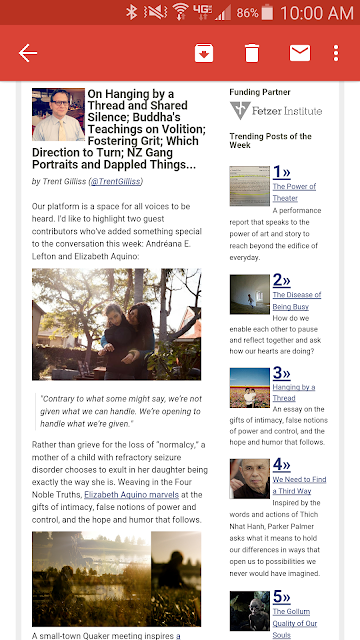 I woke up this morning to two emails from two different friends, congratulating me on being highlighted in the weekly newsletter of On Being. That beautiful website posted my writing last week, seemingly out of the blue, and I am both overwhelmed and terribly honored to have been highlighted, too!

On another note, I had planned on doing a Saturday Three-Line Movie Review but will need far more lines to explain what happened to me the other night. Here goes.

I drove Oliver and his friend to the Dodgers game on Thursday night with a plan to drop them off and then go see the documentary Iris. We got a late start, though, and spent nearly an hour in the car trying to get there, so I couldn't make the movie after I'd dropped them off. I decided to drive to the nearest movie theater and just take my chances on whatever was showing at an appropriate time which happened to be Tomorrowland. Despite it being only PG which indicated perhaps more light fare than I was in the mood, and the fact that it was a Disney flick and I'm not a Disney person, it starred George Clooney whom I adore, so I bought a ticket. I also bought a chicken apple sausage with spicy mustard, a small popcorn (not buttered) and an iced-tea. Between the ticket and the food, I was out $32, but there's really nothing I like more than being at a movie, so I went in and began watching. Did I mention that because I've bought so many tickets at this particular movie theater, I received a free small container of those little ice-cream nuggets, too?

Reader, I ate the hot dog, the popcorn and the ice-cream nuggets in the first twenty minutes of the movie and then decided it was excruciatingly boring. I don't like science fiction or kid movies, to tell you the truth, which makes me not such a good person (so much for the On Being recognition!). I stood up and made my way out of the theater, glanced right and left to see whether there were any employees lurking about and then darted into the movie across the hallway, Entourage. I am not a person who ever did "bad" things, like sneaking into R movies when I was under-age or shoplifting or the like. I won't claim any kind of moral authority because the reason why I was always so "good" was because I didn't want to get caught. On top of that, I never did drugs or drank excessively -- not because I was morally above it all -- but rather because I was certain I'd be the person who died. I didn't have sex with my boyfriend in high school but not because I was saving myself for a husband or because I believed premarital sex was wrong. I didn't do it because I was too afraid of getting pregnant. My plan if such a thing happened (even though I wasn't having sex!) was to kill myself. I'm serious when I tell you that the only times I've gotten in trouble were when I was in a sky bucket with some other eighth graders at Six Flags Over Georgia, and one kid threw a cup of soda over and it landed on someone down below. Six Flags security met us at the end of the line and threw us out of the park. I was mortified. The other time was when I drove in a car with a bunch of kids up to North Carolina for what was known as The Ecology Club Ski Trip, and one boy went into a 7-11 and bought a trunkload of Coors beer (which at the time was only available in North Carolina and all the rage to folks in Georgia). Our car was promptly pulled over, and we were all taken to a small sheriff's station and questioned. I was beside myself and not just because the sheriff who questioned me was a sort of squeal like a pig Deliverance redneck who was eating a Spam sandwich and said to me, How'd you like a bite of my Spam sandwich, brown eyes? I was beside myself because I thought they'd tell my parents.

Anyhoo. Where was I?

So, I've slipped in the movie Entourage, found a seat and start watching. About five minutes in, I realize that this movie is dreadful, even more dreadful than the series and that I must leave. I get up and walk out and into another movie. The movie is Mad Max which I had no intention of watching given the violence, but because there's been so much hoopla around it and claims that it's brutal but feminist and beautiful to boot, I thought I'd give it a try.

Have I ever told you how much I hate 3-D movies? Getting glasses involved me going to the usher and claiming that I'd forgotten to pick up the glasses which involved lying about the ticket. I did it, though, and crawled back to my seat and began watching. I lasted about five minutes, though, before I realized that my glasses were broken. I think I realized this at the same time as about twenty other people who all began making their way down the stairs to the usher. We all stood in a clump while the usher walkie-talkied her co-workers, requesting new glasses. People were very upset because the movie was still going on, and we were missing it. I kept silent because -- well -- it seemed presumptuous of me to complain, right? Minutes ticked by and still no glasses, so the usher told us we could get a refund. I slipped out and went downstairs to get my refund. The lady asked me for proof of ticket purchase. Oh dear Lord, you're thinking. See? I was going to get caught.

Instead I lied some more. I told her that I'd left my ticket in the theater and couldn't possibly crawl down the aisle and find it, especially given that my 3-D glasses were broken and had already twenty minutes of that fabulous movie! I was righteous! Without proof (I must have been sweating or had the tell-tale sign of criminality), the lady gave me a ticket to use at a future date rather than cash. I made a beeline out of the theater, paid $8.00 for parking because I couldn't possibly go back inside and get my ticket validated and then drove aimlessly around the shitty for about an hour before finally going home.

I had driven in Los Angeles rush hour traffic to Dodger Stadium and back, watched fifteen minutes of three different movies, eaten really bad food, compromised my morality and was out $40.

Reader, I suppose I could have written a Three Line Three Movie Review, but this was more fun wasn't it?