My son Oliver is eight years old and has totally, completely agreed to be the featured guest on this post. We've scanned two of his recent drawings, two of a series that I estimate to already be close to one hundred with no end in sight.

Here's the first drawing, followed by Oliver's explanation, dictated directly to me: 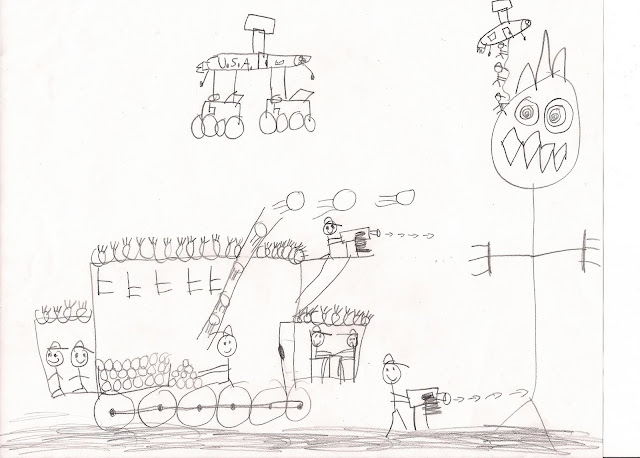 One day a chief soldier brought his soldiers to this feasty, meaty giant that lived in Hallalooloo Land. Then the captain brought his big armored tank that has two machine guns, a big cannon fire and you can hold guns in it and soldiers work in it. He brought two helicopters. One was a big one holding two tanks, and the other was holding soldiers so they could hop on to the meaty, feasty giant and shoot him down. A soldier is putting black, hard balls into the cannon which goes straight to the meaty, feasty giant, and the two machine gun soldiers start firing as many bullets as they can at the terrible giant. One soldier is in a room with the chief, talking about how they could destroy the Giant. Two other soldiers are in a room that they're ready to come out of the ship and take their guns and shoot the Giant down. 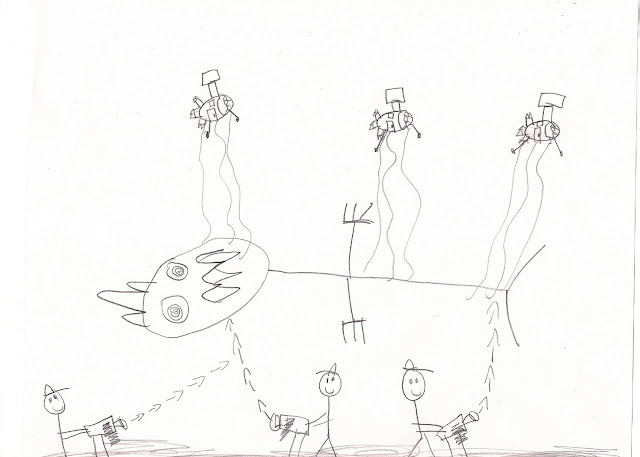 Here is where the Giant fell down and three small helicopters come and pick him up from the ground. Then three other soldiers come and take the machine guns and start shooting at the Giant to make sure that they put him out of his misery. While they are doing that, the soldiers, who are not in the picture, are thinking of a place to put the Giant. They think they should put him in a castle that has barbed wire all around it and it has nothing in it. It's an empty place and they're going to put him in there. There are going to be two soldiers guarding the door that have bullet-proof vests. They have bullet-proof shields and bullet-proof helmets, and they have big, ginormous bazookas that shoot out ginormous rockets. The meaty, feasty Giant has chains on his feet that have a huge black ball so that he can't move. They have it on one of his arms. It looked like he was dead but he can come back to life so they have to be careful. One of the soldiers thought of putting handcuffs on him, but that's on another picture.
Posted by Elizabeth at 4:15 PM