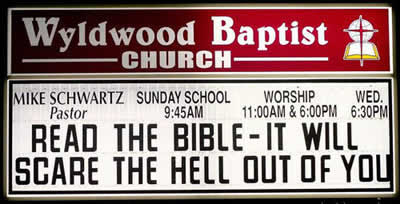 Funny church sign
I just re-read a post I wrote a while back about my waning Catholicism, despite the lifetime of church and a true appreciation of the beautiful traditions, art and literature that lie at the base of the Catholic faith. It was called "Dwindling" and I realized tonight as I read it, that the dwindling has increased. I haven't taken my sons to church at our parish in almost a year and when Sunday rolls around, I still feel a twinge of guilt. Nonetheless, my boys are deeply spiritual, and I talk about spirituality warmly with them all the time. Today, in response to some of the news about the enormous earthquake in Chile, Oliver said I hate that God makes earthquakes. I told him that God didn't do any such thing, that earthquakes were a natural, albeit terrible process and that surely God and good were found even in the middle of it. Oliver then said what about seizures?

What about seizures? is what I am thinking right this moment. As I typed those words, I heard the lonely cry come from Sophie's room which means she is seizing, a deep cry that is primal and makes the hairs on my arms rise and my heart beat fast, no matter how many times I've heard it. I admit to wearily getting up and going to her bedroom, only five steps away. I sat down next to her, realizing that the seizure is happening in her sleep and it is over. I smooth the hair away from her face and place a dry cloth under her head where she has drooled. She is already back asleep and I sit there for a moment and wonder what the hell? I wonder what the point of taking two powerful antiepileptic medicines is if she continues to seize erratically, usually several times a day? I wonder whether the little white pill that I have to pay a lot of money for and get from a pharmacy in Canada is making her worse, putting her into a sort of trance during sleep that seizures love. I wonder whether this type of seizure might happen silently and kill her. I stop wondering that, say a few words of peace and leave her room. I come back here.

What about seizures? Now I am spiritual enough to feel the presence of God, of something ineffable in just about every waking moment, but I'm not religious enough to believe that god's hand is in this, somehow. The only faith I have in science, probably, is in defining that seizure as an electrical disturbance in a wildly dysfunctional brain.

I am bone tired -- and not in a physical way if you know what I mean.

When I pray now, I pray for mercy, believing that mercy is random.

I began this post with the intent of telling the story of Oliver getting into the car when I picked him up at school on Friday afternoon. As soon as he was sitting down, buckled up, he said, Mom, is fuck a bad word? Henry, in the front seat, gasped and looked at me.

Yes, it's a very ugly word, Oliver. You should never use it is what I said and then he told me that he saw it written on a wall and his teacher put tape over it (I wondered whether he had sounded it out and thought given his reading difficulties, it was pretty darn good). A few minutes later he said So how come fuck is such a bad word? And this time, it was just so obvious that he wanted to say it, to feel the thrill of the verboten, so I just said what I've probably said at least a million times in his almost nine years of life: OL-LI-VER!


When I began writing this post I debated whether or not to write out the word because I do feel a certain frisson when I see the word, hear it or say it. I was going to use all those little symbols after the letter f.


But you know what?

What about fucking seizures?
Posted by Elizabeth at 12:01 AM