How We Do It -- Part I in an ongoing series 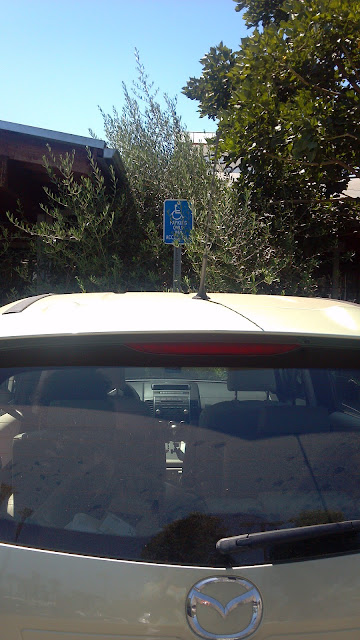 I've been immersed in the world of disability for over sixteen years, and while I feel old and ugly and slightly bitter and very, very edgy, I also feel confident, empowered and intolerant of bullshit. When you've watched tens of thousands of seizures, maneuvered a seizing child down a hallway in your arms, changed an adolescent's dirty diaper in an airplane bathroom (said adolescent standing between your own legs as you sit on the toilet), slept with an adolescent every single night in fear of/anticipation of the seizure that will cause her to stop breathing -- well -- the list goes on and on, you've pretty much figured out how to do the daily life stuff and you might even be a bit RIGID about your routines.

Sophie is out of school until after Labor Day, so she's hanging out -- all day -- with me and the boys. It's tempting to just stay at home all day because that's easiest and probably most comfortable for Sophie. Aside from the big trips to the beach and museums, the trips that you can plan for, pack the wheelchair, the diaper bag, the sippy cup of juice, the handkerchiefs for drool, the little errands are the ones that often seem insurmountable. It's a pain to fold up Sophie's wheelchair for a trip to the grocery store or a quick trip into the bank or the dry cleaner or any of the myriad errands I run on any given day. A typical child can come along for the ride, either stay in the car or traipse in and out with me. Even when the boys were babies it wasn't that difficult to hoist them on my hip and do my thing.

I had to get out and do a bunch of errands today and literally begged Henry to go along with me and Sophie. I needed him to sit in the car with her while I ran in and out, so I bribed him with a promise of lunch and we headed off to the cooking and bakeware store that also has a cafe. I didn't pack Sophie's wheelchair because I didn't feel like it, and I knew that a handicapped parking space was right in front of the store so if I needed to, I could leave Sophie in the car with the window open.

Cause that's how we do it.

When we got to the store, I helped Sophie out and then walked awkwardly through it with her and Henry. While he held the things I picked out -- cake boxes, a bottle of hard cider for The Husband, cannoli shells and a pastry bag -- I held Sophie's arm and simultaneously kept her from sitting down on the floor as we waited in line to purchase our things. Sophie began to hum and moan -- loudly -- and Henry raised his eyebrows at me and said, under his breath , Soph, come on, shhhh and so did I. I let her sit on the floor for a minute, her long gangly body with legs crossed at my feet, and used my legs to shield her head from hitting the side of the check-out counter, deflecting, at least in my mind the stares of the other people in line. Then I signed my credit slip, handed the bag to Henry and helped Sophie up to standing and then out the door, all the while pretending that her constant hum was completely and utterly not affecting me and I was in fact oblivious to it.


When I put her in the car, in the seat behind the driver because she throws her head to the right and that way she won't hit it on the window, I felt relief. I straightened my back and rolled my neck and unclenched my hands. I also told Henry to go inside the cafe and decide what he wanted. He would then come out and I would go in and order our food while he sat in the car with Sophie. When lunch was ready, I would bring it out to the car and sit in the backseat with Sophie to feed her. As we eat our lunches from our handicapped spot, we watch the people coming and going into the cafe, sitting outside on the patio, kids rocking back on their chairs, chairs scraping on the concrete. When Sophie is finished and I've eaten, I'll go back in the front seat and we can go. And if Henry isn't with me, I'll go inside myself, leave Sophie in her seat with the windows open. She is visible through the plate glass window and I always hope that people will see her and assume she's old enough to be alone in the car.

That's the way we do it. 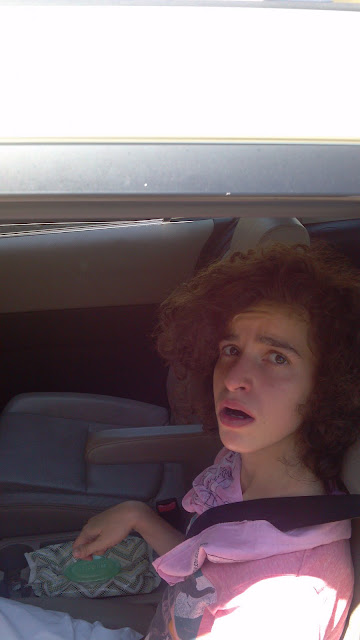 Later, when Sophie has been dropped back off at home with the babysitter, Henry goes out with me to finish our errands.

He asks me, Do you think our lives would be better if Sophie were normal?

I tell him that our lives would certainly be easier and then ramble into the musing about disability and unconditional love and how much we've learned and so on and so forth, until Henry interrupts me by saying that man, if Sophie were normal she'd probably hate me but at least she could drive.
Posted by Elizabeth at 5:18 PM

Email ThisBlogThis!Share to TwitterShare to FacebookShare to Pinterest
Labels: Disability, Henry and Sophie