Sunday Koans and the moon 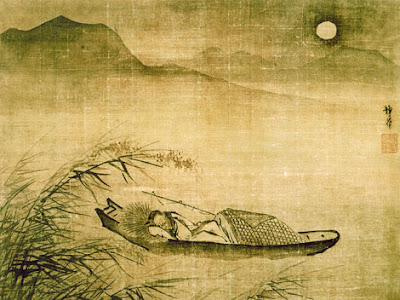 The master Ryokan lived in a poor little hut on a mountainside. One moonlit night he came home and found a burglar looking for something to steal. But Ryokan was a hermit who owned nothing.
Poor fellow, he said to the robber. You have come a long way and found nothing. But I don't want you to leave me empty-handed. Please take my clothes. And Ryokan stripped, and handed the clothes to the robber.
Poor fellow, said naked Ryokan, going outdoors again when the inconsiderate robber had left, How I wish I could have given him this wonderful moon.

-- from Zen Buddhism, An Introduction to Zen with Stories, Parables and Koan Riddles Told by the Zen Masters, The Peter Pauper Press
Posted by Elizabeth at 3:43 PM