How We Do It, Part XIII in a series 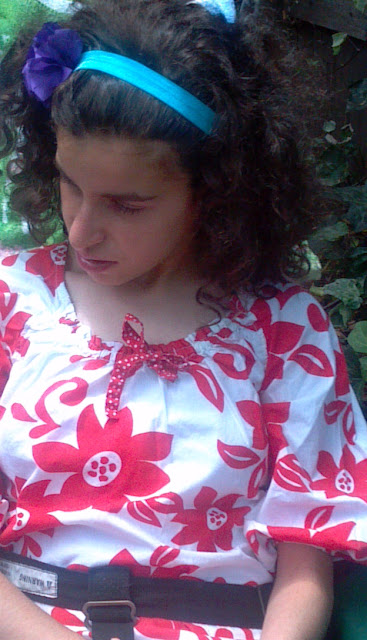 Sophie and I walked outside yesterday and down the path toward the driveway of our friends' house in the Hollywood Hills. She, Henry and I had come to an annual Fourth of July get-together, a family party that I look forward to each year for the great company, amazing food and a view of fireworks that stretch all across the Valley. Oliver is still at camp, and the The Husband was with The Mistress, so I had resigned myself to being Sophie's sole caretaker at the party -- not a job that I love as it entails either holding her hand  and walking around to calm her or sitting her in her wheelchair while the many children run back and forth and all around, seemingly oblivious. There were new children at this year's party, and when they'd arrived they had done the usual not-rude-but-entirely-understandable-curiosity-staring and when introduced, said polite hellos and then ran off. As Sophie has grown older, the disparity between her and others has only magnified, and while I have historically done nearly everything in an attempt to "include" her, I've grown tired of it, frankly, and perhaps shut down that part of myself that yearns for friendships for her. As we walked toward the large driveway, I pointed out some of the beautiful trees and flowers that lay along the pathway and only noticed the children jumping on the trampoline in my peripheral vision until one of them shouted, Does she want to come and jump on the trampoline with us? I looked up and saw a young girl, maybe nine or ten years old, in a blue and white striped skirt, a white tee-shirt and a large red flower in her shiny black hair, standing at the opening of the trampoline. Well, there's a lot of kids on the trampoline, so it would be hard for her, I think, but thank you for including her! I shouted back. How old are you? the girl directed her question at Sophie. She's seventeen, I said, and she can't talk because she has a problem in her brain. But she can understand you! The girl spoke again, directly to Sophie. I'm sorry about that! But you can come jump with us! My whole body thrilled to this exchange, and I told the girl that I wouldn't be able to lift Sophie up that high, that the ladder was too difficult for her to use, but that I really appreciated her invitation. We stood there for a few minutes and watched the girls jumping, their free bodies soaring not so high as my own heart, beating steadily through the hands that linked Sophie and me.
Posted by Elizabeth at 9:42 AM

Email ThisBlogThis!Share to TwitterShare to FacebookShare to Pinterest
Labels: Disability, friendships, How We Do It, Sophie