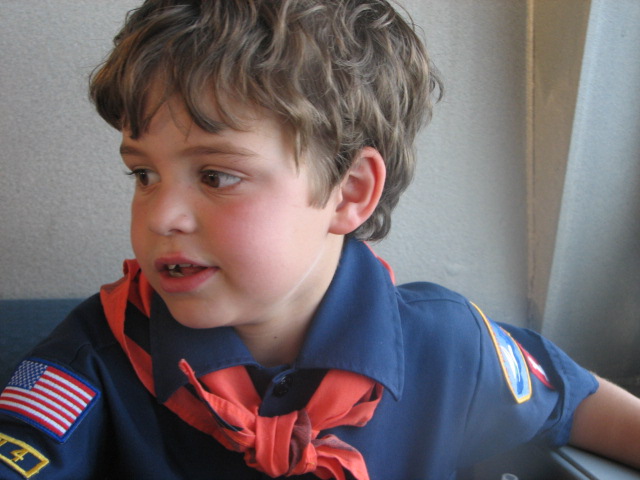 My son Oliver was sad today to learn that the Boy Scouts of America have reaffirmed their discriminatory ban on gay members. He's sad enough that he isn't going to join the Eagle Scouts in the fall, something that he looked forward to doing after five successful years as a Cub Scout. I know some of you might think that it's because of my influence that he's chosen not to be a part of an organization that allows open discrimination toward a person because of his sexuality. After all, he's only eleven and what does an eleven year old need to know about sexuality anyway? I don't go around telling everyone that I prefer having sex with women, a scout leader told me once a few years ago as a response to my question about whether it bothered him that people are banned from serving as leaders if they're gay. I was feeling our troop out, trying to come up with an answer for Oliver who had come home from selling popcorn for his pack wondering why one of his friends had told him that his family didn't want to support an organization that thought his two mothers were immoral. I told him that our pack was a very tolerant, good one and not to worry about it, but I also told him the truth -- that it was an official rule to discriminate against people who loved people of the same sex --  so I guess I planted the seed of doubt in Oliver's mind. That seed took firmer hold when he badgered me with questions about the scout oath and why did they say you had to "be kind," but they didn't like gay people to guide them?

He's a very sensitive and ultimately sensible kid who thought the whole rule was just stupid, bad and wrong.


So, I agreed with him at the time, shaking my head at the stupidity, and assuring him that people were working on overturning that rule.

I guess not, for now.

So, Oliver is giving up something he loves in protest, and that does make me proud. I told him that the Girl Scouts are much more inclusive, and he replied, And they sell good cookies!


I guess we'll be buying a whole lot of cookies next spring. But he definitely would not want to be a Girl Scout, he told me. That's not as stupid as the Boy Scouts rule, but they're giiiiiiiirls.
Posted by Elizabeth at 4:00 PM