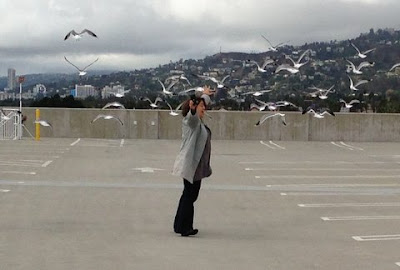 A rivulet of water runs down the tiny metal awning over the door outside my bedroom and washes down the steps. I heard it from my bed during the night, off and on, as I slept, but I never saw it.

I reached up to adjust the shower head, make it stronger, a rivulet of water snaked down my arm, traced a vein, and without contacts, I thought it so, a vein, clear water and a blurry caress over the brown of my skin.

I knew a man who cleaned his eyeglasses obsessively with Windex, naked in the kitchen, cigarette burning. The window in the bedroom had a dark shade over it. He'd spray them, wipe them, hold them to the light, curse and spray them again. He never saw clearly, and then, neither did I.

What is essential is invisible to the eye. (Antoine de Saint Exupéry)

Today is International Day of Persons with Disabilities.  It's about removing barriers all over the world. The U.S. Senate needs to ratify a United Nations treaty on rights with people with disabilities. The opposition, led by Rick Santorum (yes, that Rick, with the disabled daughter) believes that the treaty will change U.S. laws and make the United States abide by international laws. Ironically, the United States leads the world in its progressive disability policies and will serve as a model for other countries where much work needs to be done. Republican Bob Dole, at age 89, helped to push the American Disabilities Act into law and is urging the opposition to stop and vote for the treaty. The vote is tomorrow. If you're so inclined, contact your senator and let him or her know where you stand. Here's a good article from the Washington Post.