I told a good friend today that the line between feeling really, really crappy because of a virus and feeling better is a thin one, and I feel so much better this evening that I'm practically kicking up my heels. I did loads of laundry today and made a delicious beef and sweet potato stew. I baked a loaf of Parmesan Bread with Beer and Black Pepper. I drove Henry to his lacrosse game waaaaaaaaay out and cheerfully dropped him off. I let Oliver go out with his friends to a shooting range.

OK. Back up you say?

Yes, I let Oliver go to a shooting range. The photos that my friend sent me of my son shooting a gun sort of made me sick to my stomach, and I don't want to post them in fear of any of my gun-loving relatives or friends sticking it to me. Do as I say, not as I do. The Husband and I utterly trust the friends who took him and we made the decision to let him because it's something that he actually really excels at -- his focus and precision are pretty extraordinary, and we're taking the gamble that not forbidding the outing will remove some of the glamour and mystique from guns. 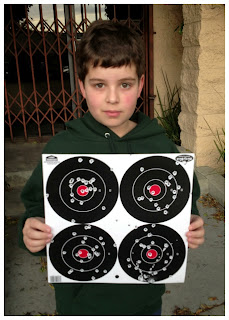 We'll get back to you later on whether we should have said Absolutely, positively NOT!

A few days ago I felt so badly that I didn't care about anything, maybe not even my children. Yesterday, I felt bad enough that the prospect of never getting well was about to take over. I feel great sympathy for those who suffer from chronic illness or more acute disease -- and despite dealing with a child who has multiple giant seizures every single day, I definitely take my own health for granted, which is just plain stupid. I don't want to go overboard here, but give me a day or two and I think I might even go on a serious exercise regime.

Good lord -- first I let my kid shoot guns and now I'm going to exercise.
Posted by Elizabeth at 6:51 PM