The day after the day I rested 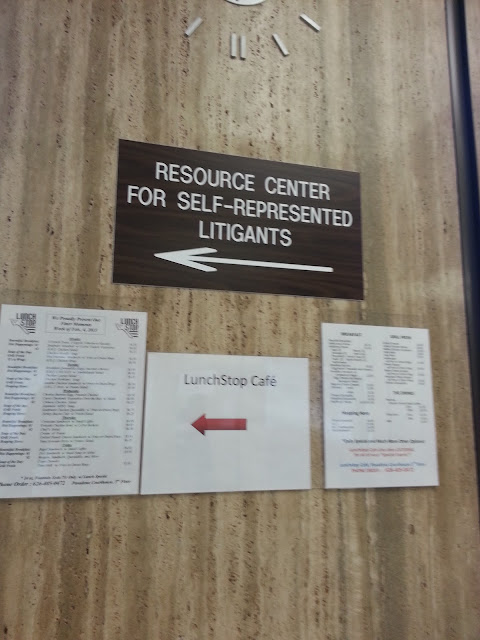 I dragged myself out to Pasadena this morning and began the proceedings to formally divest Sophie of her rights as a self-determined individual and become her guardian. I am, evidently, a "self-represented litigant" in this process and had the great fortune to be referred to a wonderful organization that will help me along the way. I filled out the beginning paperwork this morning while coughing discreetly into my upper arm and felt almost grateful for not feeling fully up to snuff. Had I been my usual feisty and iconoclastic self, I might have had reason to see irony in every sign that crossed my path and every box that I checked. Should I check YES or NO as answer to the question Does conservatee wander and get lost? Or how about Is conservatee confused and forgetful? We won't even get into Is conservatee able to make decisions about his or her sexuality? I thought for a split second about the women in North Dakota and Mississippi, and how their rights to reproductive freedom are not just being chipped away but, rather, hacked at the roots, while an hours old embryo is perhaps going to be considered a person there. Way to go Mississippi and North Dakota -- so very advanced of you. Such is the way my mind generally wanders and it might have been for more than a second if I hadn't felt so run-down from this dang virus. In any case, I finished my appointment and then drove back home where I walked around in circles in my house for a few minutes and even attempted to reach Medi-Cal for direction regarding Sophie's Drug Acquirement Troubles. If you can believe it, when your identification number has a LETTER in the string of numbers, instead of just pressing the corresponding number on the phone you have to do this convoluted thing where you press STAR and then the corresponding number and then STAR again and then a number that says which number the LETTER comes on that button. I'm not kidding you. That's what the lovely Medi-Cal voice tells you to do, and you know what? I couldn't figure it out. I started to cry a little and then giggle a little and then I realized that I need to get back into bed and watch some more episodes of House of Cards. So that's what I'm doing.
Posted by Elizabeth at 1:06 PM