So, today is the great James Joyce's birthday, and there's a nice biographical homage to him over on The Writer's Almanac this morning with tidbits like this:


Joyce liked to drink and he liked to dance; his daughter-in-law said that "liquor went to his feet, not head. "Joyce usually sat with his legs crossed with the toe of one crossed again under the calf of the other. He was kind and generous to strangers, and he was known to invite waiters to join him at his table for food and drink.

There's also a nice nod to the Irish writer on Brain Pickings with excerpts from a little-known children's book, The Cats of Copenhagen.

I've written about him here and there, highlighting some of my favorite passages from his short stories and books, so today's re-post will be one of those with one of my favorite photos of Sophie and Henry from 2010.


A Portrait of the the Artist 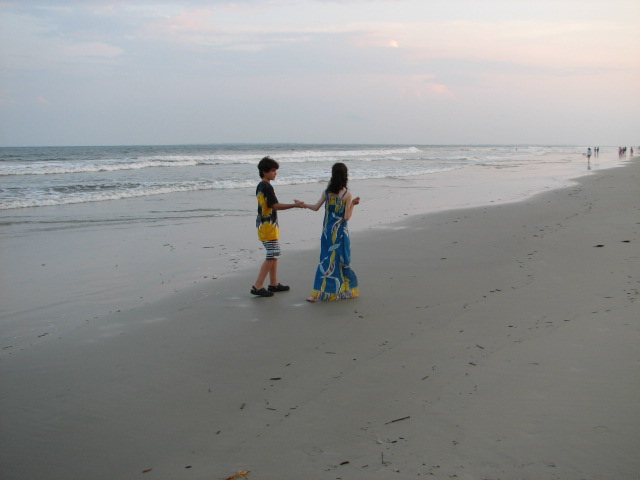 as a Young Man is certainly not one of my favorite books, but I remember a certain passage inside of it so well that it feels like yesterday when I first read it, or savored it or hung, suspended, in it. Today, in 1916, James Joyce published it, his first novel.
He was alone. He was unheeded, happy and near to the wild heart of life. He was alone and young and willful and wildhearted, alone amid a waste of wild air and brackish waters and the sea-harvest of shells and tangle and veiled grey sunlight and gayclad lightclad figures of children and girls and voices childish and girlish in the air.

A girl stood before him in midstream, alone and still, gazing out to sea. She seemed like one whom magic had changed into the likeness of a strange and beautiful seabird. Her long slender bare legs were delicate as a crane's and pure save where an emerald trail of seaweed had fashioned itself as a sign upon the flesh. Her thighs, fuller and soft-hued as ivory, were bared almost to the hips, where the white fringes of her drawers were like feathering of soft white down. Her slate-blue skirts were kilted boldly about her waist and dovetailed behind her. Her bosom was as a bird's, soft and slight, slight and soft as the breast of some dark-plumaged dove. But her long fair hair was girlish: and girlish, and touched with the wonder of mortal beauty, her face.

"Heavenly God!" cried Stephen's soul, in an outburst of profane joy.
Posted by Elizabeth at 3:00 PM