How We Do It: Part XXIV of a series 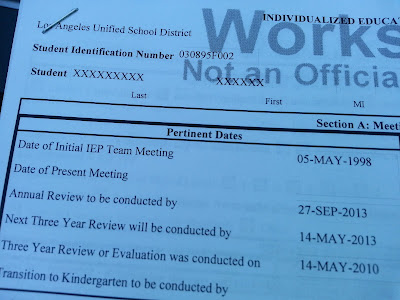 Last night I drove Henry to baseball practice, parked and turned off the engine. I pulled out an IEP that Sophie's teacher had sent home for me to approve -- there had been some small changes made in wording, decreed by the downtown beast that is LAUSD -- and my eye caught the box at the top that detailed the dates of Sophie's first and most current IEPs. Date of Initial IEP Team Meeting pulsated, and before I could even blink, the numbers coalesced into some kind of black arrow that pierced me right in the middle of my forehead so that tears gushed out and Sophie's three-year old self in 1998, her curly head and lopsided smile, her slanted walk and the hold your breath promise inherent in the unknown appeared in the car and I was fifteen years later undone. This is how we do it, the moment only mindful of the weight, not so much a black cloud but an arrow to the mind's eye, a rock that crushes the flesh, water and blood.

On the way home, Henry and I exclaimed over the moon in the eastern sky, a gigantic golden disc that retreated as we drove toward it, moonstruck.
Posted by Elizabeth at 9:14 AM

Email ThisBlogThis!Share to TwitterShare to FacebookShare to Pinterest
Labels: Henry, How We Do It, IEP, musings, Sophie