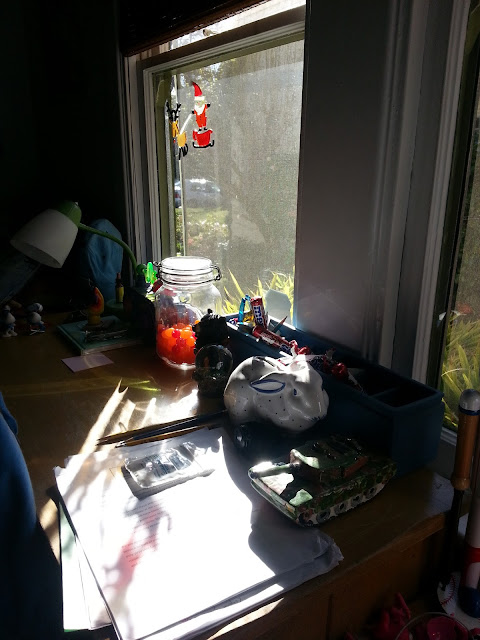 That's a photo of the boys' desk in their room, and yes, there are still Christmas gels on the window and yes, I let them keep that huge jar of candy balls on the desk and have found, actually, that they eat less of it when it's right there in front of them. I thought the light coming through the window this morning was beautiful, even as I folded laundry while sitting on Henry's bed in the quiet, and I'm determined to go for a walk this morning and begin, anew, some exercise. I've got nothing more to say about the Oscars last night other than I thought them exceedingly stupid, particularly Seth McFarlane, and I wondered why in the hell Michelle Obama was there virtually with those weird people in military costume standing behind her, contorting their faces uncomfortably. I can't stand Quentin Tarantino and his violent, ugly movies, so I was disappointed that he won Best Original Screenplay over Wes Anderson's Moonrise Kingdom and I also hate musicals (did you know that about me?) so the musical numbers were excruciating to watch except for Adele who I think is fantastic and projects an aura of honesty and sweetness beyond her celebrity. The high moment for me was Daniel Day Lewis, of course, with whom I've been besotted forever, so thank goodness the night wasn't a complete waste of time. So there you go. A mini-critique of the Oscars from another self-absorbed blogger. Now I'm going back to gazing at the pools of light in my house while I clean.
Posted by Elizabeth at 9:12 AM