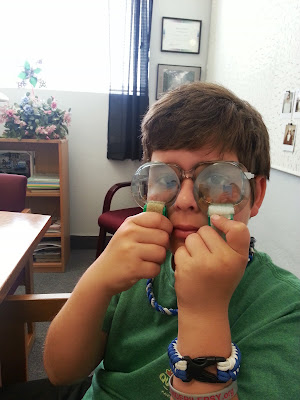 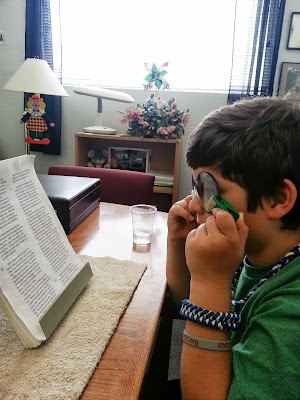 I think I might have stunned everyone, including myself, into silence with yesterday's post. Musing on sex, marriage and relationships just isn't included in my subtitle, and while there were a whole lot of readers, there were very few comments. Just so you know, it might have been true and it might have been fiction. David Sedaris calls it "realish."

Today, I've been driving all over the dang city -- down to Long Beach for Part II of Oliver's foray into the Irlen Method. What you see above is Oliver trying out different colored screens that will be fitted over clear lenses and will, hopefully, help him to read and address some of his learning problems. I nearly teared up at one point when he began reading quite fluently from the text in front of him. He was the happiest I've seen him in a long time, and we both have high hopes that this school year will be much improved. He picked out a badass pair of Ray Bans that will be fitted with the colored lenses, and as soon as we get them, I'll take a photo and show ya'll the new O. I might even assign him the remainder of War and Peace that I never got to before my fiftieth birthday.

On another note, Henry has enjoyed his first four days of high school, and when I drove up to the school to pick up the carpool this afternoon for the first time, I was struck by so much youthful beauty parading around the campus that it was nearly blinding. The girls all seemed impossibly long and smooth-legged, the boys wide-shouldered and ridiculously handsome. It was 100 degrees in the valley today, and by all appearances, high school is smokin' hot as they say. I don't know what the hell has happened since I was in high school, but I do not remember this at all.

Sophie has been home for a couple of days with a bad cold and cough. She had so many seizures the other day, before she showed symptoms of the cold, that I wondered if her relatively useless medications (Vimpat and Onfi) had completely plateaued and were now utterly useless. I also wondered if it was the Blue Moon, and then I wondered if it was the beginning of the end, and then I spent a fair amount of time irritated that I'm no closer to getting and trying the high CBD tincture of medical marijuana which leads me to truly dark and despairing thoughts that, after having had them off and on for nearly twenty years, causes me to completely dissociate from any emotion attached to dying, death. Does that make sense?