Insanity from the Past and Some Things Never Change Except, Perhaps, Seizures

I'm cleaning and organizing today like a madwoman. Oliver is feeling under the weather, so after plying him with homemade soup and juice, I've let him vegetate in front of the television, gone through all the books and crap in my bedroom/office and tried to make sense of the universe. In going through some papers, I came upon this beginnings of an essay, written on October 3, 2004. I believe it was a writing workshop essay, the result of the prompt Write yourself through a difficult situation.

Ten years later, I think it might provide some hilarity on your otherwise humdrum Wednesday. Feel free to laugh AT and with me.


I am walking our new puppy, Valentine, around the block. I'm training her to be an assistance dog, and said matter-of-factly, this sounds like an amazing idea. However, the training will take two years -- two years of driving to San Diego and back three times a month. I have a nine year old daughter with severe handicaps, a six year old son who has just begun kindergarten, and a three year old son who is currently raging through life.


I was never a dog person; in fact, it's something about which I've always felt guilty. Because I don't get all warm when I see a dog or enjoy talking about dog antics or even like petting a panting, squirming dog, I somehow have a character flaw. Isn't there a saying, "Never trust a person who doesn't like animals?" But I have a dog, now, and I tell myself that the end -- a devoted animal who will sleep with Sophie and alert me when she has seizures -- will be well worth the conflicted feelings. As I walk her around the block, I'm thinking "is this 'a difficult situation' to write through?" How do I write through this as a difficult situation?


When I get back to the house, I go into Sophie's room. My husband Michael is sleeping soundly next to her. He has served the assistance dog role now for over five years because I am a psychotic wreck in the night. She is sitting up in bed, cross-legged in the corner. Sophie's bed is a mattress and box-spring on the floor and she sleeps against the wall. I unfold her legs and pull her to the edge of the bed, to make it easier to slip her pajama bottoms off and change her diaper. She is always soaked in the morning. She is nine and a half years old. Is this a difficult situation?

Michael, who on school days is aggravatingly slow, has practically leaped out of bed and is now very busy getting ready to rush off to work. It's a Sunday, and he hasn't had a day off in over a week. He's a chef and he has to go. I am angry and the day looms ahead of me empty in its Sundayness.


The writing ends abruptly there but prompted me to search for the following photo of Sophie, the dog and me, dressed in pink poodle skirts for a Halloween extravaganza in San Diego, a required event for Dog Assistance Training. Please feel free to laugh AT me (especially my hideous, hideous hair) and WITH me. What the hell was I thinking? 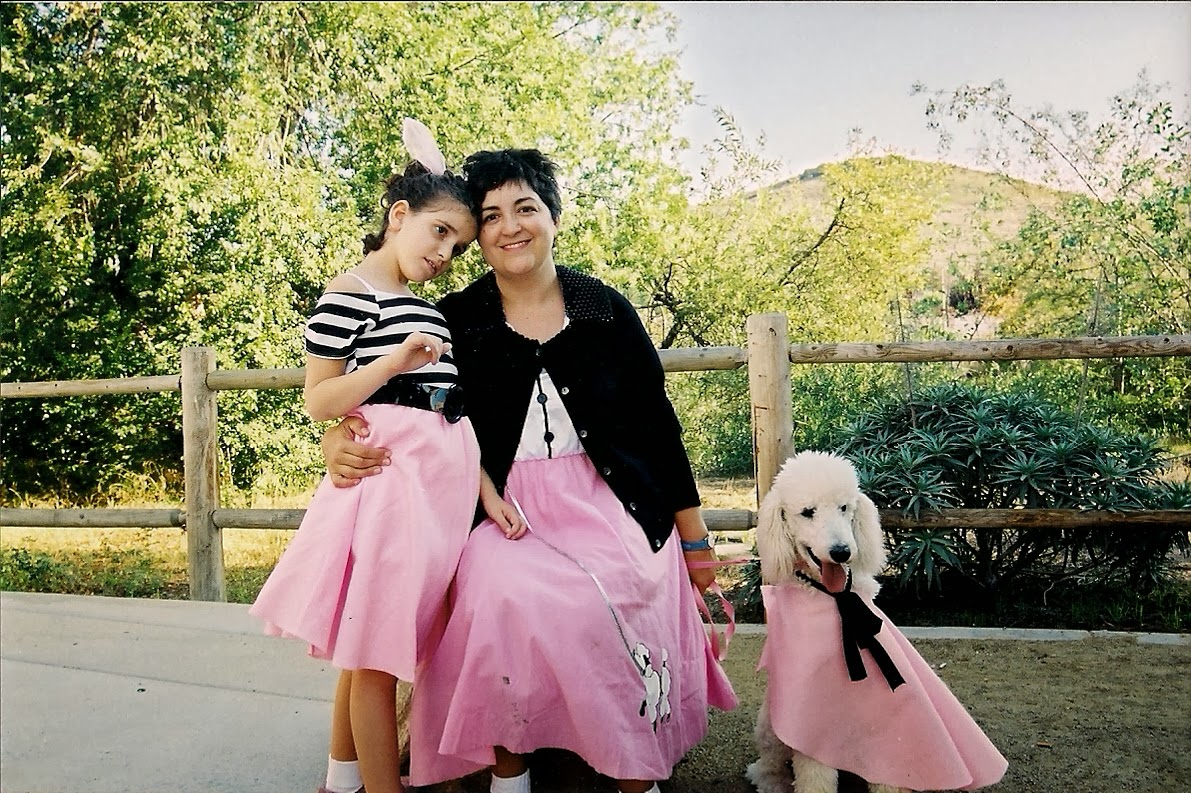 Ha Ha Ha Ha! The assistance dog became the family dog after four months of me ferrying myself and my three young children and THE DOG down to San Diego for a three times a month 6 hour training session. Don't ask me how I managed to do this for four months.  Evidently, I lost my mind which included shearing off my hair and wearing poodle skirts. I couldn't handle being the Alpha Dog and soon allowed Valentine to run around willy nilly with my little boys. Today, I'm still out of my mind, but my hair is longer, I wear only jeans and long-sleeved tee-shirts and, occasionally, a burka. Valentine is still adorable, but she sure as hell is not a seizure dog and provides basically no services other than unbridled enthusiasm and an annoying, insatiable need to be loved. Henry is now fifteen years old and well out of kindergarten, impossibly handsome and still the sweetest person on the planet. Oliver is now twelve years old, home-schooled and still raging through life. Michael, or The Husband, still sleeps with Sophie and works all the time. Now eighteen years old, Sophie still sits cross-legged on the bed and needs to be changed. Up until two weeks ago, she still had seizures every day, all day.

Posted by Elizabeth at 2:14 PM