This Is Still Happening, Part Six, But There's an Upside, World War I Re-enactments and Poetry 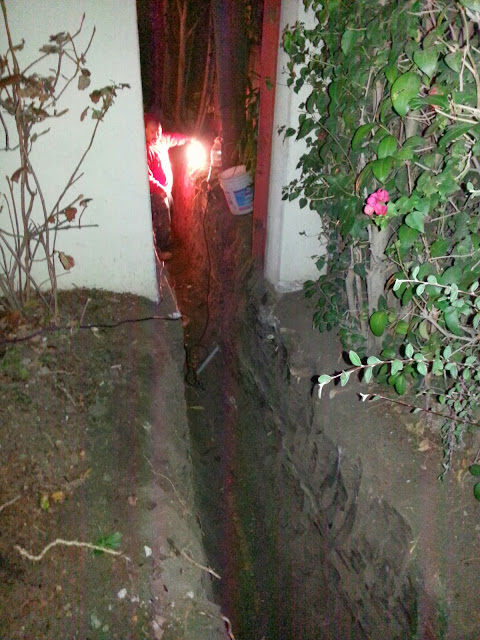 The trench has now reached into the front yard, and in lieu of other treasure hunts, like yesterday's, or my going insane, I've decided to begin a World War I re-enactment. I will pit The Brothers as the Allies against The Husband as the Central Powers/Austria-Germany. I will be Wilhelmina Owen, the Poet, and stand at the front door shouting warnings about gas and the lie that is dying for one's country.***

Bent double, like old beggars under sacks,
Knocked-kneed, coughing like hags, we cursed through sludge,
Till on the haunting flares we turned our backs
And towards our distant rest began to trudge.

I will watch the three male species of The Family fight in vain to reorganize the World As We Know It and then fall with the 9 million other combatants in four miserable years.

I, as Wilhelmina, unlike my brother Wilfred, The Brothers My Sons and The Husband, will escape the insanity by climbing into the Airstream that miraculously appears where the trench ends, still reciting poetry, The Mermaid swimming along right behind me.


***I've always gotten a kick out of those folks who do re-enactments -- they seem to take themselves so seriously. It's what I feel about people who watch a lot of pornography, too. I just start giggling and squirming and feeling like it's all so --- well --- silly. Anyway, the warnings about gas and the lie that is dying for one's country and the verses that I've quoted here are from the great World War I poet, Wilfred Owen. I've posted the entire poem here, if you want to read it, but don't if you're one of my patriotic, war-loving, ultimate sacrifice kind of readers. And dulce et decorum est means it is sweet and right and is taken from an ode by Horace.

Posted by Elizabeth at 4:00 AM