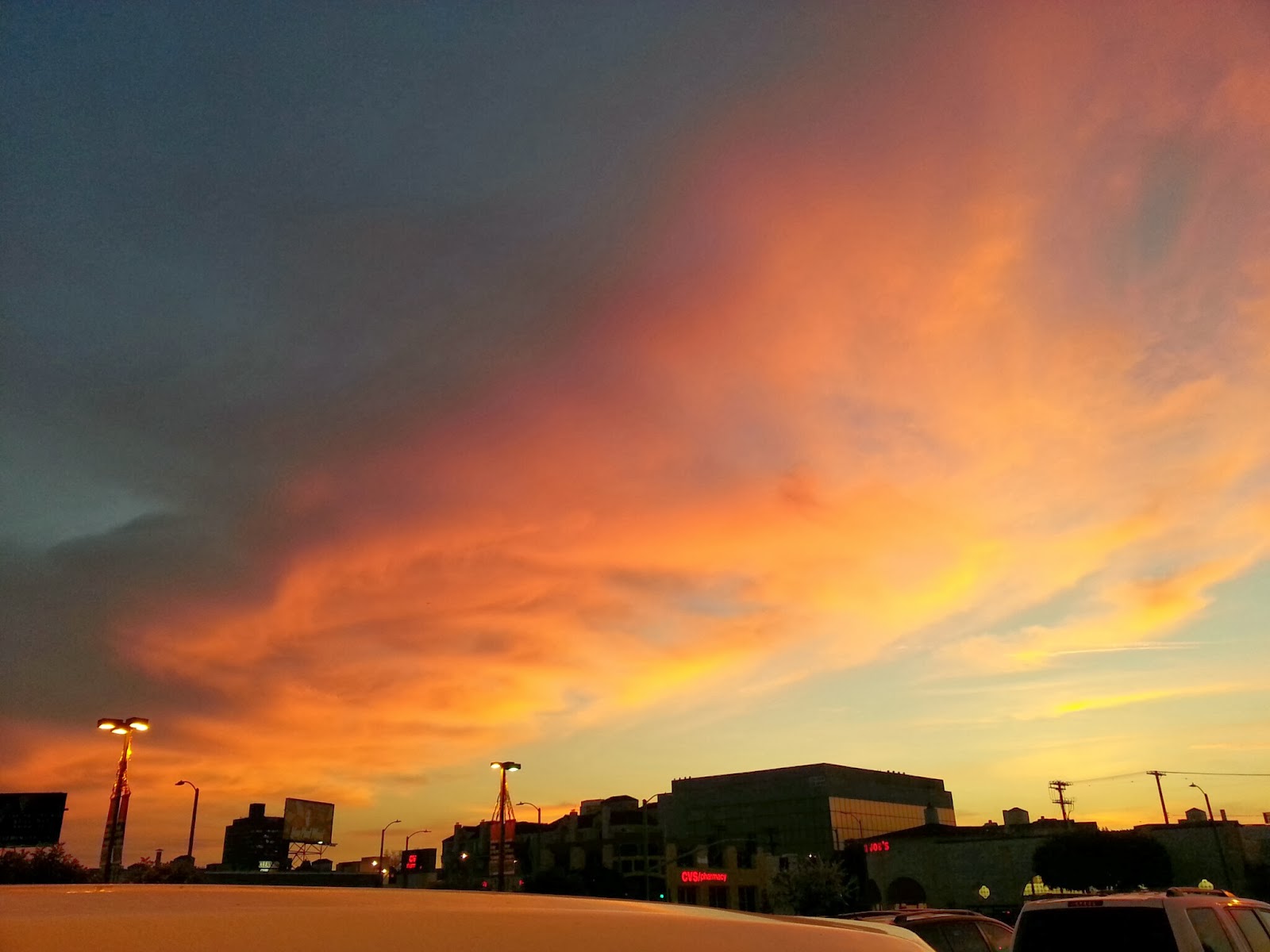 
When I moved to Los Angeles sixteen years ago, I thought the name Ralph's for a grocery store chain was ridiculous, and I guess I still do. Yesterday -- or maybe it was a couple of days ago, I snapped yet another photo of the sky over Ralph's parking lot, and as I scrolled through those photos in my phone, I thought about how the ordinary and the extraordinary are right here, right now, nearly every moment of every day. Then I thought about the ability to hold contrary thoughts and feelings, how that ability is honed over the years when your life experiences dictate it, and how that ability is so difficult to articulate. I spoke at length this afternoon with a friend who is helping me to get my "book" up and off the shelf where it's languished for years. Our conversation ranged from the intensely personal to pure editorial business, but at some point in it, I tried to convey how my life is at once horrible and perfectly all right. I meant -- or mean -- to say that it's not horrible. It's fine. It's fine even being horrible. When Sophie was a tiny baby, newly diagnosed with her hideous seizure disorder, when we were just stepping onto the path of a very different world, I was taken to an Orthodox Jewish holy man somewhere in the Bronx. I rode in a limo up to the hospital where this holy man was convalescing after suffering a stroke. I walked down a hallway, clutching Sophie to me (she was not even three months old), escorted by a few bearded men and led into a room where a man sat in a wheelchair, his head resting on his shoulder. He had the most piercing eyes I had ever seen, and I had to almost look away. He said a few things to me in Hebrew, and the men who had escorted me translated them to me, words that made me stop cold as they were things that no one, no one at all, should have known in that room. He lay his hand on the baby for a blessing or something, and he looked up at me with his eyes (his head on his shoulder) and he said, She will be all right. Your baby is all right. He gave me an ordinary little medal with a Hebrew symbol on it and told me to pin it to her clothes, near her skin. I did that every day for years, I think, and now I don't remember when I took it off or what I did with it. It doesn't matter, though, because despite everything, Sophie was going to be, she was all right. She is all right, and so am I. Ralph's is a ridiculous name for a grocery store chain, but damn, sunsets sure look as good over Ralph's as they do anywhere else.
Posted by Elizabeth at 5:14 PM