When the POTUS Made Me Rethink My Escape Plan to Fiji 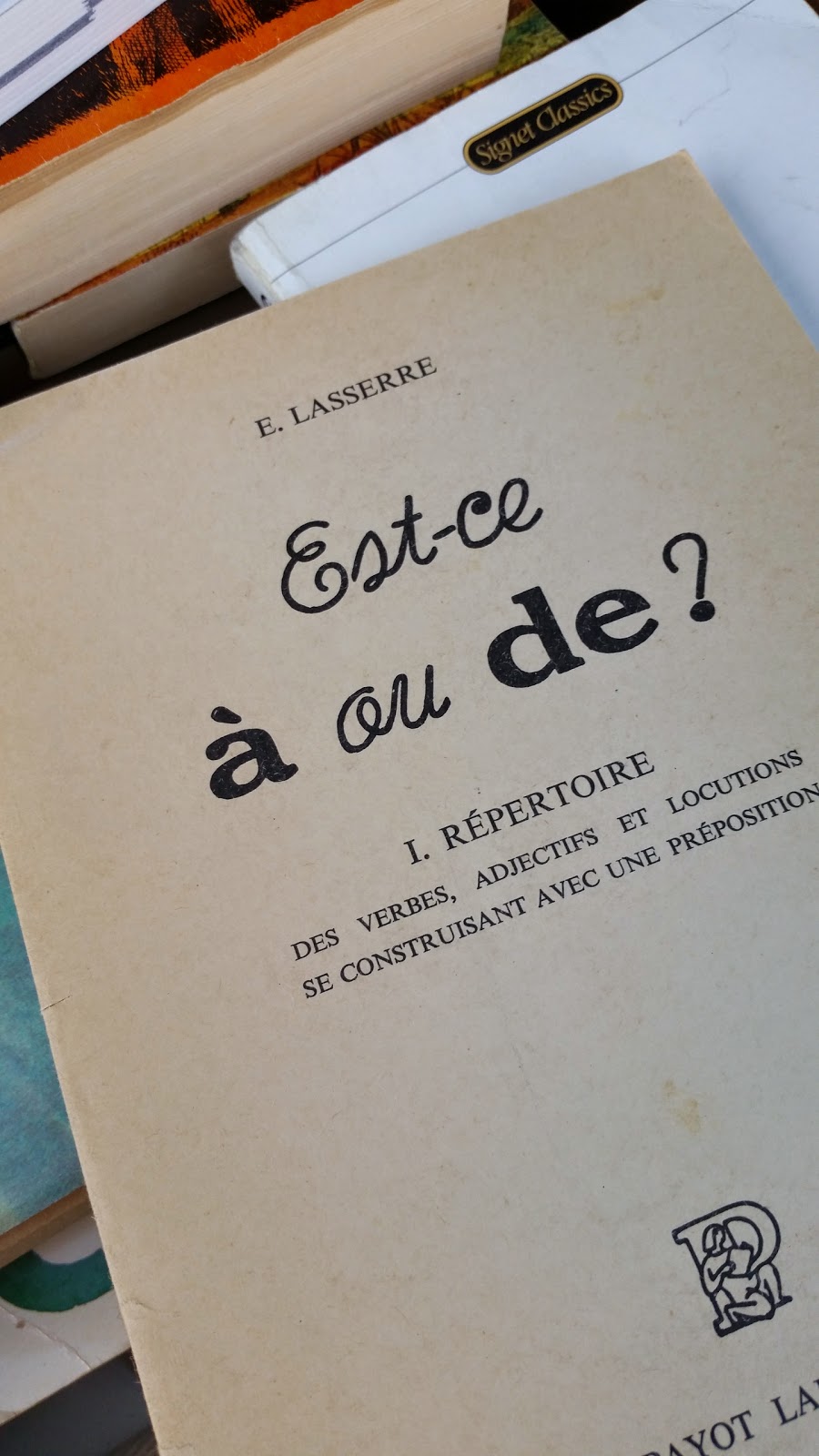 So, I'm in the middle of reading this Japanese book about tidying up, and I'm in the middle of doing a smash-up job of purging my home of crap -- books, papers, clothing, vases from florists, cheap jewelry, the stuff of the bourgeoisie. While it feels good to be so constructive, so diligent, it also makes me terribly emotional. Yes, I open up photo albums and flip through Christmas cards that I've saved from fifteen years ago. Sure, they're photo cards of people whom I love dearly, but what the hell? I put them back on the shelf. I had difficulty ridding myself of 30-year old paperbacks that I'd probably bought used but that stand for --- what? Youth, I guess, and beloved academia. My UNC days. My old boyfriends. My old husbands (relax, there's only one).  Here's a photo of a box that I put in the back of the car and then parked in the lot next to the Goodwill and bided (or is it bode?) my time unloading: 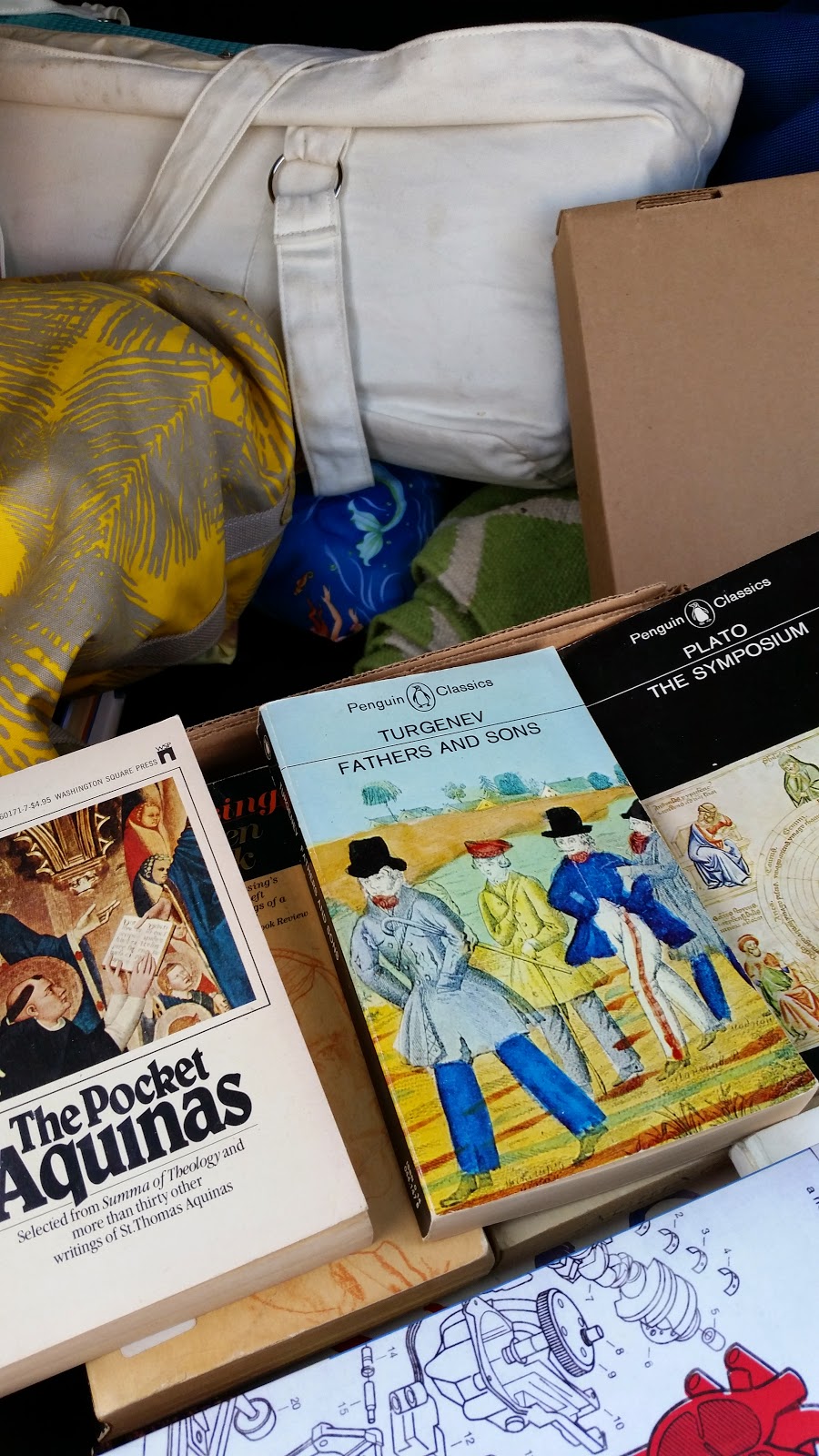 I read that Pocket Aquinas on a plane on my way to Europe for a grand backpacking tour with my friends Louise and Jan. During the summer of 1985. We had graduated from college. That's the kind of weirdo I was, apparently. That Aquinas was not a light-hearted guy. The Turgenev was from a Russian literature class I took my sophomore year -- back in the last century! I never took philosophy, so I imagine the Plato was me trying to educate myself. Good Lord. I felt emotional and maybe even a tad bit insane in my nostalgia.  There were a few books that I couldn't remember the reason why I had saved them. For instance, why Erich Fromm? If ever there was a boring class, it was Psych 101 which I'm assuming assigned this. 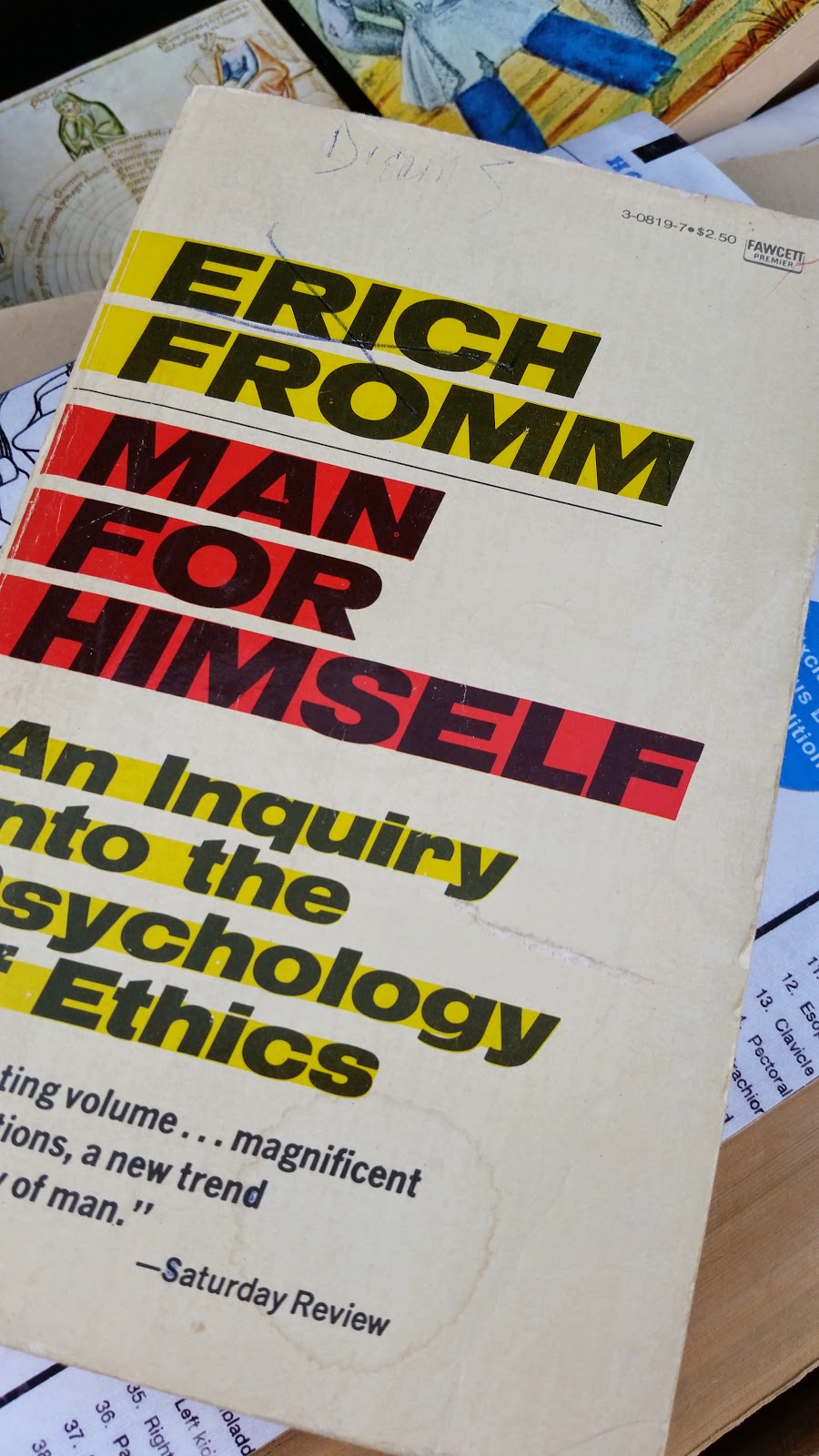 Even the title is enough to make you shudder and lay your head on your desk in defeat. The only thing interesting in that book was what was in the flyleaf -- written apparently by one of my Spanish-speaking lovers: 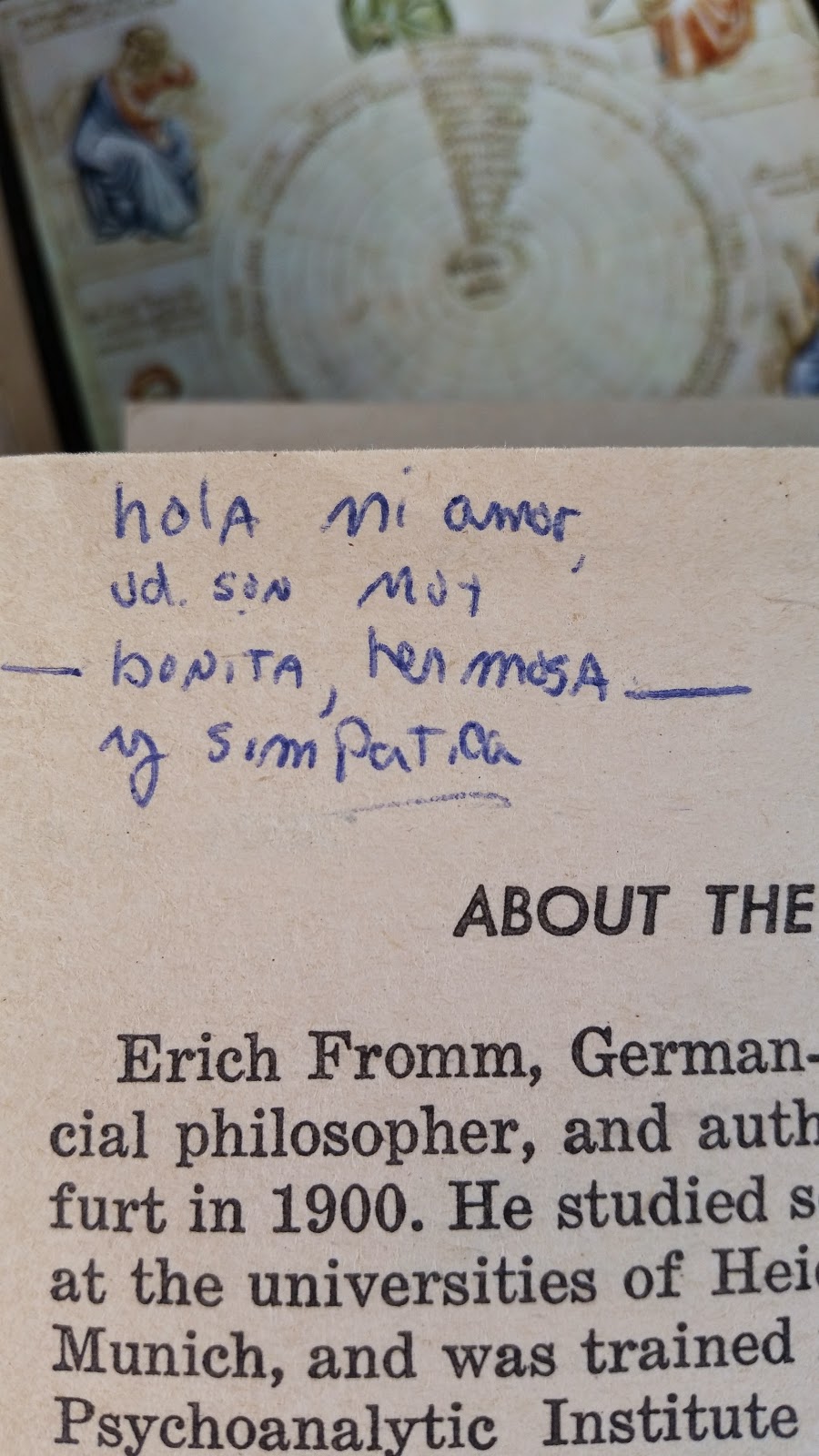 Funny, but I totally don't remember any Spanish-speaking lovers.

Maybe it's all the going through the childhood stuff of mine and my three children that is giving me the blues (the toys in the attic! I'll confess here, too, that I saved many of their teeth. Yes, teeth. When the tooth fairy took them, she deposited them in little bags in my underwear drawer) -- all that time passed and passing, how it's a flash of lightning and then again, in some respects, so very, very long. I don't miss the days when I was young or even when my kids were young because -- well -- because my life is a good one, and each stage is terribly interesting, if sometimes very difficult. I'm glad to be alive in 2015. That being said, the purging was also exhausting. Frankly, it made me want solitude, to be alone with my thoughts and not badgered by teenagers or obligated to change a diaper, take the girl for a walk, go grocery shopping or even wash my hair. I texted one of my best friends that I wanted to run away from everything and everybody. He texted me back that I had missed my chance robbing liquor stores with him and living a life on the lam. I told him that I was more interested in Fiji than a life of crime. My friend lives as austerely as a monk and is not tied to possessions in the least, so I wanted him to be proud of me, proud of my purging. Here's what our texts looked like: 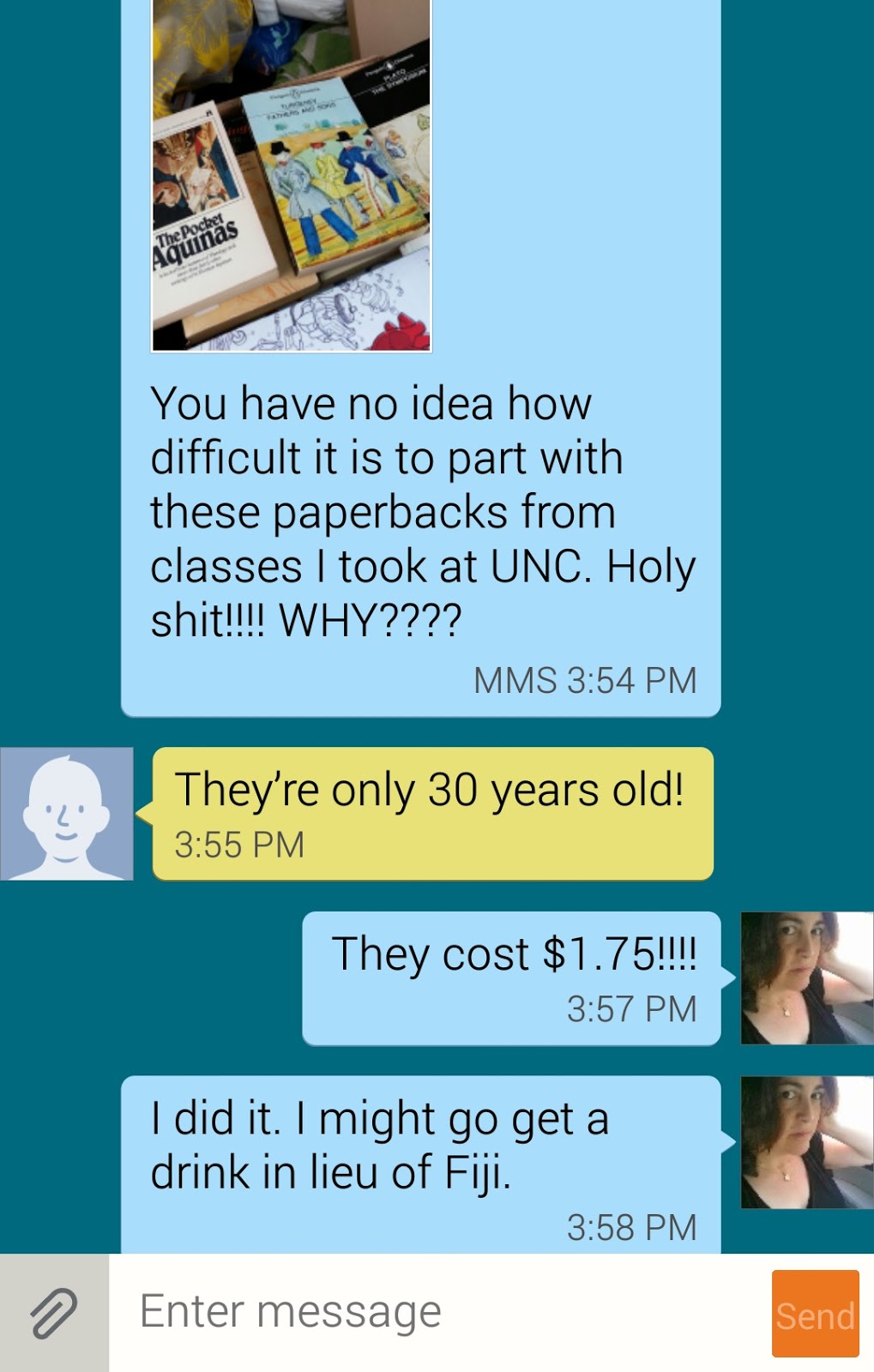 I just watched the President rock the country in his State of the Union (is there anything more ponderous than that title?). My only caveat to his otherwise glorious speech was that while listing all the citizens of the country who deserved equality, he neglected the cognitively disabled. I know it was a slip -- at least I hope and think it was a slip -- but it made me wince and mumble under my breath. I hope it's not emblematic of the already extremely low status that the cognitively disabled hold. As for the poker-faced Tan Man and his White Man colleagues "across the aisle" -- well, who gives a flying foo foo for them? At best, I'll give them a charitable bless your heart. Despite my dread of listening to the droning Mitch McConnell and the Tan Man for another couple of years, I might put the Fiji trip off to watch our President hopefully rock through them with us.

Posted by Elizabeth at 9:05 PM