I Wish That I Had Known Her 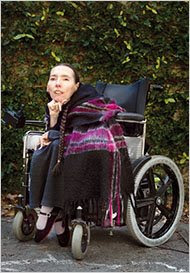 Here's a link to the obituary of a woman, Harriet McBryde Johnson, who was quite a radical in the world of disability. The title of the piece is Happy Nevertheless: An Ongoing Conversation about a Disabled Life.

I am most struck by Johnson's constant "attribution of rights to humans with severe intellectual disabilities." I don't know her work but will look it up, now. This short article about her makes me think of my own inchoate longings, what I find most difficult to articulate about Sophie. It makes me think, too, of the revered osteopath Dr. Viola Frymann who has seen Sophie for most of her life and has worked her entire life (and she's well into her 90s now, I think) to improve the potential of all children, regardless of ability. Her primary motivator, other than God, is her belief in the integrity of all life.

I went to a young man's bar mitzvah today, my first. The boy's name is Danny and I've known him and his mother since I moved to Los Angeles over ten years ago. He has a head of bright red hair and speaks with an augmentative communication device. He can walk, awkwardly, and also uses a wheelchair. He loves movies and song and, evidently, his Jewish heritage. The ceremony was beautiful, most of it conducted in Hebrew with much participation from various people in Danny's life. The rabbi in charge made a point of telling everyone that Danny's life was a miracle and that he had worked hard to get to this important day. He said that his body was not perfect but his soul was, and that made sense. During the ceremony, there were many "disruptions," as other children with various disabilities interrupted, walked around, made noises and otherwise acted as if they were in worlds of their own. Some of these children appeared severely autistic and some were just young. What was most unusual, though, was the complete acceptance in the room, an utter lack of judgement or discomfort that I have rarely felt in any other "public" place. I felt envious of the community, there, and aware that my own reservations about Sophie have perhaps limited the community that we might have been a part of. Part of that limiting was self-preservation, trying to carve as normal a life as possible for us and that often means leaving Sophie out of things. Part of the limiting, too, was Sophie's general comfort level, and I don't have any real regrets about that. I was struck and inspired today by the sense of inclusion in this community, a religious one that believes all of God's children have a place and that even the damaged have something, and often something more to offer.

Thank you Danny and Michelle and Aron and Rachel for sharing your life with me today. It was beautiful.
Posted by Elizabeth at 10:37 PM