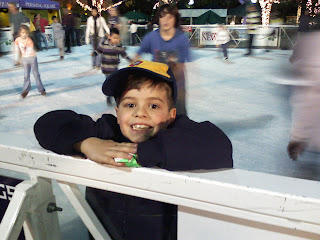 The boys and I went ice-skating this evening downtown at Pershing Square. This is Los Angeles' lame, albeit charming, attempt to replicate Rockefeller Center. It's a tiny ice-rink in the middle of the city. There are a scattering of tall buildings and with the Christmas angels lit and poised over the rink, it looked quite nice. We went with Oliver's Cub Scout pack, and only a few intrepid parents actually got on the ice. I felt bold (after all, I'd spent the first ten years of my life in the northeast) and strapped on some size 9s and then helped both boys onto the rink.

I'd forgotten how much it hurts to ice-skate. Is this because I'm old and out of shape or has it always hurt? And I'm not talking about falling. My feet felt like they could have frozen up in a cramp at any second and the burning in my ankles and shins was intense enough that when I stopped at the wall, I had to make a point of not wincing. But I could skate. I wouldn't want to look at a video of me or anything but after a few hobbled rounds I started gliding a little and then felt that old rushy feeling, the ice coming up at you in cold and the swish of the blades. My arms flew up and out and I'm sure that I looked ridiculous, but it was exhilarating. Henry and Oliver took slow and painful steps around and around the ring, Henry falling over and over and Oliver more careful to just make it around. The people who "skate" in Los Angeles can't really do it (there's even a sign on the outside of the rink that says, SKATE AT YOUR OWN RISK) so there was a lot of wild flailing and falling and laughing. There were one or two hot-shots, like always, one man in a pair of tight beige pants whizzed by me on a slant a number of times and a young kid in a red sweatshirt positively terrorized the skaters with his zipping and cutting and reckless racing.

We skated for about an hour and just before it ended, I got a little cocky and went a little too fast and lost control and then went down on my hands and knees. And it hurt like hell. And I don't even want to picture what it looked like as I got up.

The boys want to go later this week. We're thinking about trying out the rink in Santa Monica.
Posted by Elizabeth at 11:21 PM