Glad Day or The Dance of Albion - William Blake, c.1794
I'm ready to type these words in a normal size and font.
Sophie has not had a "big" seizure in over two weeks. The last two days she hasn't had a single seizure all day.
That's right.
And now I'm going out on a limb and stating:
Sophie is taking a homeopathic remedy and the homeopathic remedy is helping her dramatically.
Except for a brief period of about four years on the same homeopathic remedy, you must know that Sophie has had uncontrolled seizures her entire life.
This is no coincidence and I will repeat:
The homeopathic remedy is dramatically reducing Sophie's seizures.
The thing is, when I tell people this they get nervous. They don't believe me. Really, they'll say. What else has changed for her? I know that if I were to take her tomorrow to The Neurologist, she would shake her head and not quite believe. It's been my experience that doctors, for the most part, don't seem to care at all about this sort of thing. Even my family can't quite wrap their brains around this possibility. That something alternative is helping Sophie in a very concrete way.
Before we started this new dose of oleum jecoris aselli, Sophie was having around 1-5 huge seizures a day. She had countless clusters of small ones. She was very dopey, tired or wired. She was extremely thin. I feared for her life.
So I will repeat this: we are less than two months into the remedy and she has gone over two weeks with NO big seizures. The smaller seizures happen in the morning, when she wakes up, and for the last few days, they have been minimal.
These are the drugs that Sophie has been on during the last fourteen years:
ACTH
Prednisone
Mysoline
Nitrazepam
Phenobarbitol
Depakote
Depakene
Klonopin
Clobazam
Zonegran
Lamictal
Vigabatrin
Topamax
Diastat
IvIg (technically not a drug, but a treatment)
Ketogenic Diet (not a drug but a treatment)
Felbatol
Keppra
Banzel
Not a single drug helped Sophie in any significant way. Almost all had significant side effects, including irritability, depression, anorexia, increased seizures, sleeplessness, ataxia, somnolence, extreme constipation, pain.
Wouldn't you think someone, somewhere -- some kind of professional, a neurologist, perhaps, would be interested? Come running?
They won't. And it makes me too tired to even explain why I know this.
Sophie might have a big seizure tonight or she might not. I have no idea what the future will bring. But what I do know is that she is dramatically better right now. The boys think she's gone wild, such is her energy and enthusiasm. She's been pulling everything down from shelves in her room. She is knocking over baskets of toys, reaching inside them and throwing them around. She is looking us in the eyes insistently. She doesn't know what to do with herself, the self that lies deep within, stifled and smothered and exhausted by seizures. I am trying to imagine her brain, free and wild and beautiful.
It is, quite literally
MIND BLOWING. 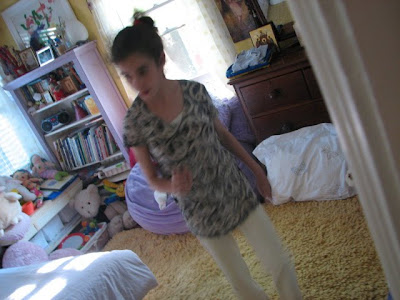 Posted by Elizabeth at 8:20 PM