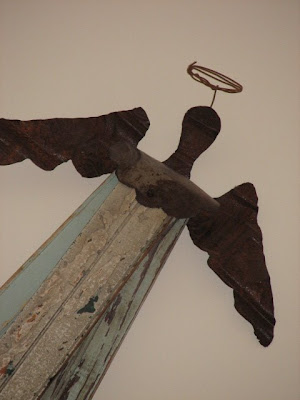 I know that I said just yesterday that I was recently back from our vacation and didn't know where to start and how to begin. I have no intention of blogging about the vacation because it was just that: a vacation. Full of family and beach and goofy child antics and aggravating family rigamarole. Perhaps I'll post a picture every day and let them speak for themselves. Or perhaps posting a photo will inspire a word or two, a paragraph or something.
Hitting the ground running is always the experience when I return here from any time away. I write this with a sigh, because it's always a given. And this morning was no different. I woke up and fed Sophie her breakfast. After that she proceeded to have a particularly violent bout of seizures and when I managed to bring her to the living room couch I had to practically lie on her as her arms and legs shot out and kicked and her spine twisted and arched and she threw her head back and groaned. It was as if she were possessed and at one point I yelled out, Stop it, goddamnitt! a word that I never use but this felt right in that moment. The other trouble was that Oliver was with me in the living room, sorting through all the crap in his backpack from the plane, and when I cursed he probably looked up and at me and saw what was happening. He's particularly emotional right now, melancholy about leaving Hilton Head, so he came over to me where I was sitting, half-lying on Sophie and he put his arms around me and started to cry. And then I started to cry, too. He said I hate Sophie's seizures and cried even harder when I agreed. I said I'm sorry that you have to experience all of this, I'm so sorry. I know how sad and hard it is and I'm so sorry. We cried together for a little bit and during that time I reassured him that we had to just be strong, that all would be well, that we loved Sophie no matter what and that we were a strong family it was all right to be sad and angry sometimes because we would feel better again, too.
And then all the seizures stopped and we got ready to take Sophie to school.
On the way, I had the burnt eyelid feeling from crying and I started feeling just the tiniest bit of resentment at other people's lives. How simple and easy they were or seemed. I felt this for just a small moment but just before the usual anger seeped in, I realized something quite different, like a twist in my psyche. I thought how difficult all of life is and can be for just about everyone. I thought that my family's life was just more difficult right now than others might be and that anger wasn't really the right emotion. I realized that I could feel compassion and understanding toward other lives and other's problems and actually not discount them, even if they were about something radically different than my own. And if I were to let go of resentment and anger I should then claim more compassion for myself and my family. I could acknowledge, then, that YES this life we lead is so damn difficult, horrible, really, a lot of the time. Of course I feel depressed a lot of the time and irritable and worried. I realized that in feeling anger and resentment toward what I had perceived as other people's lack of worries also made me less accepting of my own troubles. I feel guilty a lot of the time for not coping in the way I think I should be coping. In judging people's problems as trivial (compared to mine), I judge my own as trivial compared to others. And that makes me feel even worse.
Does any of this make sense?
I think I mean to say that a real twist in my psyche occurred randomly this morning as I drove in my car to Sophie's school.
The twist was a sort of DNA-like thing: overwhelming sadness, depression, anger, resentment, judgement, compassion, understanding became as one in a sort of Eureka moment.
Posted by Elizabeth at 9:59 AM