I woke up with a cold. I was so irritable that after yelling at the boys about all the crap that is EVERYWHERE IN THIS HOUSE, I had to apologize, and Henry hugged me and said that he understood and I was always irritable when I was sick.
When I went on Facebook I noticed that someone had commented after a comment of mine on someone's post. The post was something from Newsweek about the five biggest myths in healthcare reform. I had said something to the order of finally, a bit of sanity in all the insanity (because the article proceeded to dismantle some of the more outrageous claims of the far right regarding health care reform) and then I made a sharp-tongued remark about the photo of the screaming white man that went with the article. I think I said something like and aren't screaming angry white men sort of retro? Anyway, if I've lost you or you're not well-versed in Facebook, someone commented right after me, still about this article, but more about MY remark. And this person (whom I do not know) just typed SYFP for his comment.
SYFP
Now, even though I'm well-versed in Facebook and have actually gotten into a couple of other snafus, I admit to not knowing what those letters stood for, so I went on google and learned that SYFP meant: SHUT YOUR FAT PIEHOLE.
I had that old queasy feeling in my stomach -- the one that bears witness to my conflicts. To being a very opinionated, intelligent woman who isn't afraid to speak her mind but who is also, down deep, a tad bit insecure and eager to please, to be considered gentle and good and certainly not a woman with a FP.
When I recovered, I commented right below those letters that I thought they were quite apropros of my earlier comment about angry, screaming white men.
And then I took my quivering self right out of cyberland and went to a class on How to Cut Your Kid's Hair. I wanted to cancel the class -- what was I thinking, anyway? But I had already paid for it, so I took a shower and dragged myself over there. It was actually fun, and Oliver got a pretty good cut, if I do say so myself. 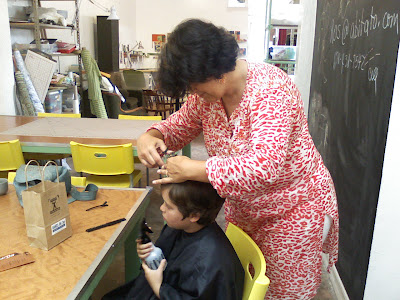 Posted by Elizabeth at 1:36 PM