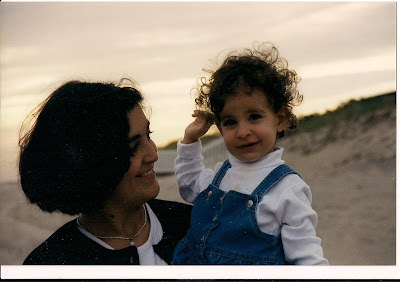 We're so used to seeing and living with uncontrolled seizures that when they happen after a period of not-happening, it's remarkable. This past Saturday Sophie did have a big seizure and another one on Sunday. She had gone almost three weeks without one, the longest time in well over a year. We had even had a few days last week where she had no seizures whatsoever. I'm disappointed a bit -- who wouldn't be? -- but I had sort of expected it or at least put up some defenses in the event that it happened. My general philosophy, the belief that sustains me, is this too shall change, and change it did. But the great period without has reignited my hope that we will one day see longer and longer periods without them.
But back to my original thought: today, Monday, Sophie was significantly slower and duller than she had been last week. She was more Sophie-like -- the Sophie that has evolved over the years as the seizures have ravaged her. If you look at photos of her as a little girl, there is still a sparkly light in her eyes and a tipsy smile. I've posted many photos of my beautiful girl and I think all who have seen her and them can attest to the soul bursting out, but I wouldn't call her expression light or sparkly. Last week, Sophie was busy and more alive -- in that light sort of way that stares down at me from our hallway where many photos are posted of the three children through the years.
Today she is moving more slowly and her face looks a bit fallen. I don't think it's my imagination. What I realize is how much her personality is defined by those seizures and how heroic she is to get up every day and just live. It's as if she is buried under layers and layers of muck on these days -- and because these days have been happening so often, days into weeks into months into years, we've all gotten used to that. When she -- and we -- had a respite, she shone.
And what that's done is give me a renewed compassion for her and for those difficult times.
And when these difficult times pass, I will be sure to be grateful for the light.
Posted by Elizabeth at 6:29 PM