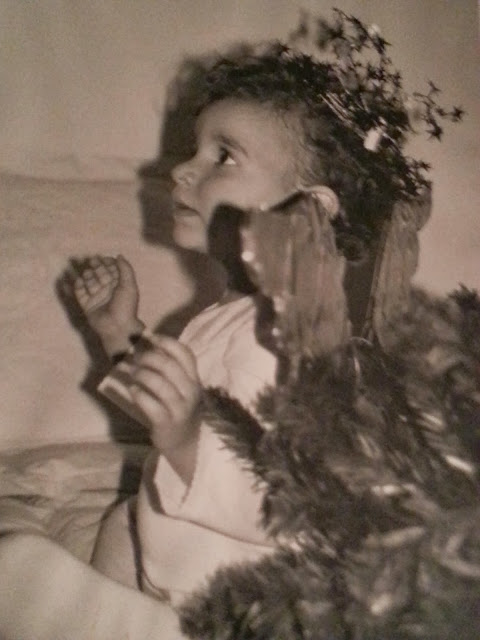 That's Sophie when she was about 21 months old. We used the photo as our Christmas card that year, and it inspired the minister of All Saint's Unitarian Church, Galen Guengerich, in New York City to write a sermon about it on this exact day in 1996. Today is the day that we begin giving Sophie Charlotte's Web, with hope and trepidation, seventeen years later. Here is an excerpt from the sermon:

... Every new parent soon learns that the birth of a child changes lots of things substantially, the least of which turns out to be the thermostat. The essence of the Christmas story, however, is how the birth of one particular child changed almost everything. Yet my own guess is that the infant born to Mary and Joseph was not unusual at all. He was just another child born to parents who loved him, a lot like the child whose photograph adorns the front of a Christmas card I received here at the church just this week. The child in the photo is a beautiful little girl, about a year and a half old, dressed in white like an angel, with golden wings and a little halo of golden stars on top of her head. She's sitting on a bed which is covered by a white comforter, with a Christmas tree alongside. The photograph shows her face in profile as she looks upward, her arms uplifted too as if waiting.

But it's when you notice her eyes, which reveal an innocent intensity reflected in the hopeful openness of her hands and fingers, that you realize this is no seasonal charade. Her parents got it exactly right. Every child is born of his or her parents'  fondest hopes, the offspring of life's most fully-realized longing for itself. Especially at Christmas, each child is an angel in waiting. For some parents, however, the longing is more poignant, the hope more heartfelt, the waiting more riddled with trepidation.

You see, I know the angelic little girl in the Christmas photo. She is a child of this congregation, dedicated here on the chancel by you and me and her parents last December. But I also know what the photo does not reveal. She suffers from severe epilepsy, which subjects her to dozens of seizures each day and has delayed her development and put the quality of her future in serious question. The photo is no conceit: the little girl and those who love her really are waiting for a new advent of hope. In her case, it may come, but then again, it may not.


The sermon goes on beautifully and even weaves some poetry of Seamus Heaney:

Peace on earth, men of good will, all that

Holds good only as long as the balance holds

For the little girl in the photo and countless others as well, the scales seem badly out of balance, tilted far to one side by the onerous weight of unwarranted suffering. Joy and hope, even when they make their occasional visitation, seem far too ephemeral to act as a counterweight and bring the balance back. Most of us have been lucky enough to know what life is like when the balance does hold, when pain and pleasure come our way in roughly equal measures, when experiences which bring sorrow don't finally overshadow the ones that leave us filled with laughter and contentment. But many of us have experienced the anguish of life gone awry.

Further along in the poem, Seamus Heaney admits how easy it is to stand idly by while malevolent forces or malicious people throw things out of kilter. He recognizes that none of us can restore the balance alone. Even so, he insists:

...every now and then, just weighing in
Is what it must come down to...

The Bible is filled with stories of how God through the ages has weighed in to right the balance in this world. Whenever hope is lost and peace just a memory and good will nowhere to be found, God shows up -- through a miracle, the word of a prophet, the voice of an angel. That is exactly what happened yet again, as the story goes, almost two thousand years ago in Bethlehem. God weighed in, this time as a child, and in so doing once again united the Spirit of Life with the human heart and opened the wonder of heaven to those of us who walk here on earth.

Does that mean everything is wonderful -- that pain is banished and sorrow forgotten and evil forever vanquished? Not at all. Lest we forget the hard truths, life has an uncanny way of reminding us, through Christmas cards and newspaper headlines and late-night telephone calls. But the glad tidings of this season renew our faith that the balance will hold. To us, even you and me, a child of hope is born, this day and every day. To us, a gift is given: the gift of life, the gift of joy and laughter, the gift of love.