Aside from getting an estimate this morning from The Plumber Guy that surpassed the initial estimate by several thousand dollars, the one that provoked my stripping naked and running down the street screaming, today proved to be better than yesterday. A very close friend brought his Guy over to take a look at the Plumbing Troubles, and he will be able to do the job for far less money. We might even consider having The Brothers help to dig the trenches around the house over Christmas vacation. I'll wield a camera and take some photos in the Selgado vein.

That aside, I needed to get busy for a small party that we're having tomorrow night. I considered cancelling in the throes of despair last night, but The Husband told me that I was insane (even though I am already insane as he will not even be at the party), so I spent today baking and preparing for the festivities. Here are some Chocolate Rye Cookies with Maldon Sea Salt. I'm also making Pecan Puffs, Chocolaty Chip Cookies and Rolled Sugar Cookies. There will be soup, bread, cheese and olives. We will carol in our snowy Los Angeles neighborhood, bundled up against the 52 degree chill. Here are some cheerful shots of our house which over the years has grown to resemble one of those Christmas stores that you see on resort islands (the resort islands that I regularly visit). It all sort of makes me nauseous and happy -- and you know me: very, very capable of holding those paradoxical feelings at once! 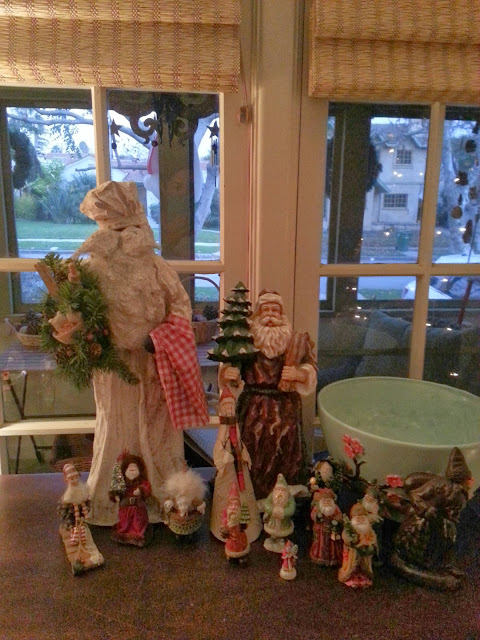 Here's the Owl ornament that I've had since 1972. Reader, I've been collecting owls for longer than some of you have been alive and certainly well before they became a thing. Have I ever told you about my owl shag rug that I hooked myself?

There's an Elf that I've had for far longer -- maybe the 1960s? It's the genuine article -- not that horrid little Elf on a Shelf business.

Here's our tree, and I have no idea what the sparkly lights are doing. I suppose it's another Christmas miracle, making up for the Plumbing Troubles.

Oh, and here's the life-sized Santa, because every tiny California bungalow should have at least one. 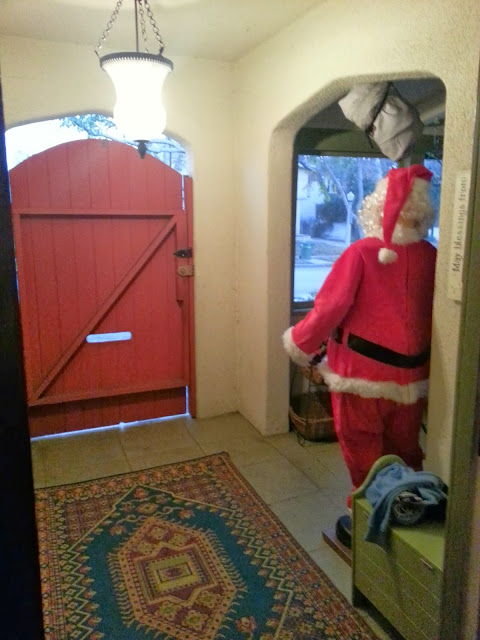 And then there's me, looking wan with freshly waxed eyebrows: 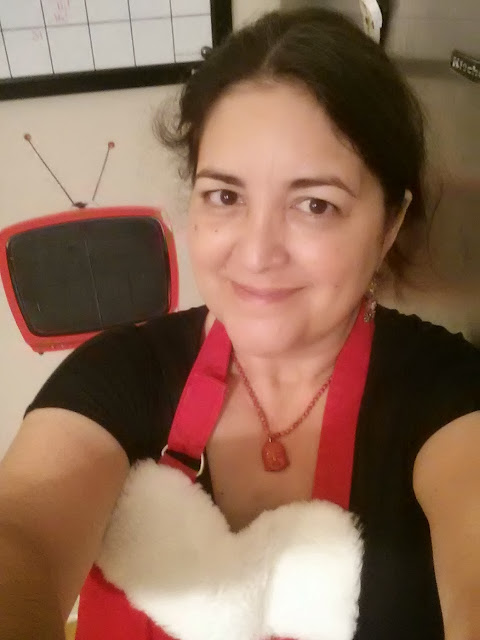 What are ya'll doing?
Posted by Elizabeth at 5:28 PM