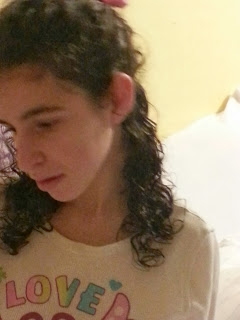 It's Christmas Eve, and we're three days into the new high CBD formula. We started on a small dose and will raise it on Sunday, but so far, so good. I haven't seen any big seizures, and the small ones are muted and quick. I've noticed that Sophie is a bit agitated and am wondering whether her other drugs are the culprit. I've learned that the interaction of benzodiazepines and CBD can be problematic. Some kids see an increase in drowsiness -- Sophie will, of course, probably be the opposite of that, so today I'm thinking that we'll begin the wean process a little earlier than I had planned. Not today, but soon. A lot of the people who are trying high CBD with their little ones have kids on multiple drugs, and many of them begin the wean right away. We're cautious weaners around here -- have withdrawn enough drugs from Sophie's poor system enough times to dread the horror of it. You have to do it slowly, by infinitesimal amounts, and wait for the response. You have to sit tight during the increased seizure period, use rescue medications, refrain from giving that tiny bit back. You have to be armored against dragon fire, maybe become a dragon, retreat into a cave with a maiden in your jaws. About ten years ago, I quit adding a third drug to Sophie's two-drug cocktail unless one of the two other drugs was weaned, and I've never regretted this decision despite the hardship of the wean process. When I hear of these kids on three-plus drugs and still seizing, I feel sick to my stomach and angry. If it's not working, it's not working, I say. It's not the full moon or getting sick or Venus in transit. It's not working. Take it off. I think it's unethical to keep adding drugs, hoping that the next will be the magical one. That being said, I understand the desperation and therefore made up my own rule: Thou shalt not add a third drug to the regimen unless one of the other two is weaned. I'm hoping that as we wean Sophie from her other drugs (if she continues to do so well!), the CBD will offer some protection, and over the next few weeks, I'll probably mull over it until the moment seems right or I get some signal or my instincts kick in or the virgin gives birth and bears drop out of trees. Now, I'm going to make some tiramisu and cheddar biscuits.