Dispatch from the Homeschool Revolution: Field Trip to Cal-Earth in Hesperia, California 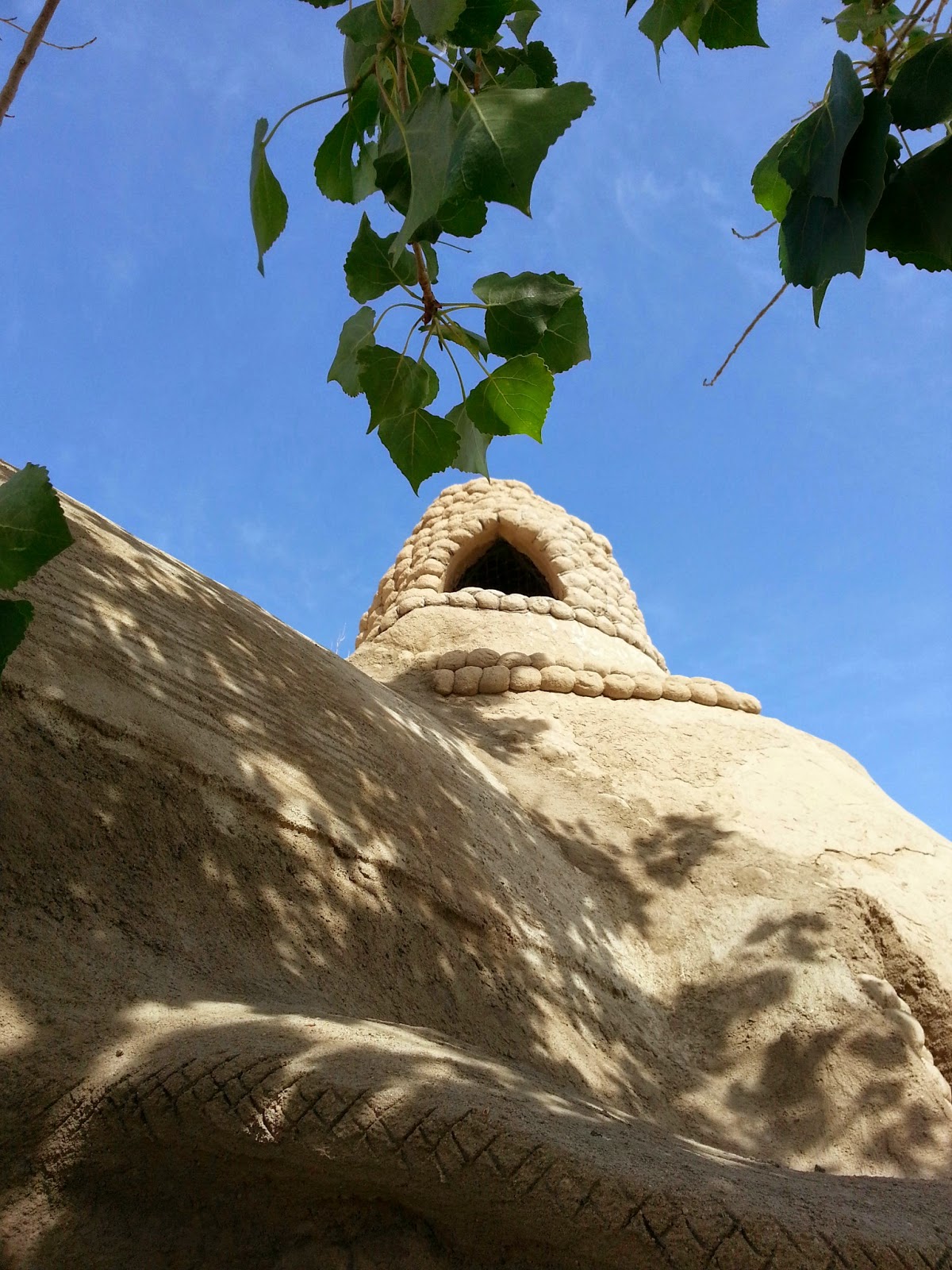 Earth turns to gold, in the hands of the wise.
Rumi

Nader Khalili was an Iranian-American architect and innovator of the Geltaftan (Earth and Fire)system known as Ceramic Houses, and of the Superadobe construction technology. He founded Cal-Earth Institute in 1991 in Hesperia, California to build and test earth architecture prototypes. Nader Khalili was also a lover of the Persian poet Rumi, and he translated much of his poetry. According to the informational pamphlet, his work has inspired a global movement, and the institute's current mission is to develop an international workshop program to help the developing as well as the industrialized world's disaster victims and displaced persons to understand and utilize earth architecture technologies and designs. Khalili died in the nineties, but his life's work lives on in this amazing place where young people are trained who then go out into the world and carry on its principles.

Our group had a wonderful tour of the barren and quite desolate facilities, bordered by a strange and vast tract housing development and miles of sand dotted with Joshua trees on the edge of the Mojave desert. We climbed on, in and around the structures -- both living structures and those used as temporary shelter in countries like Haiti and the Philippines  -- and then participated in actually building one, using only earth (the Institute never uses the word dirt) and sandbags. 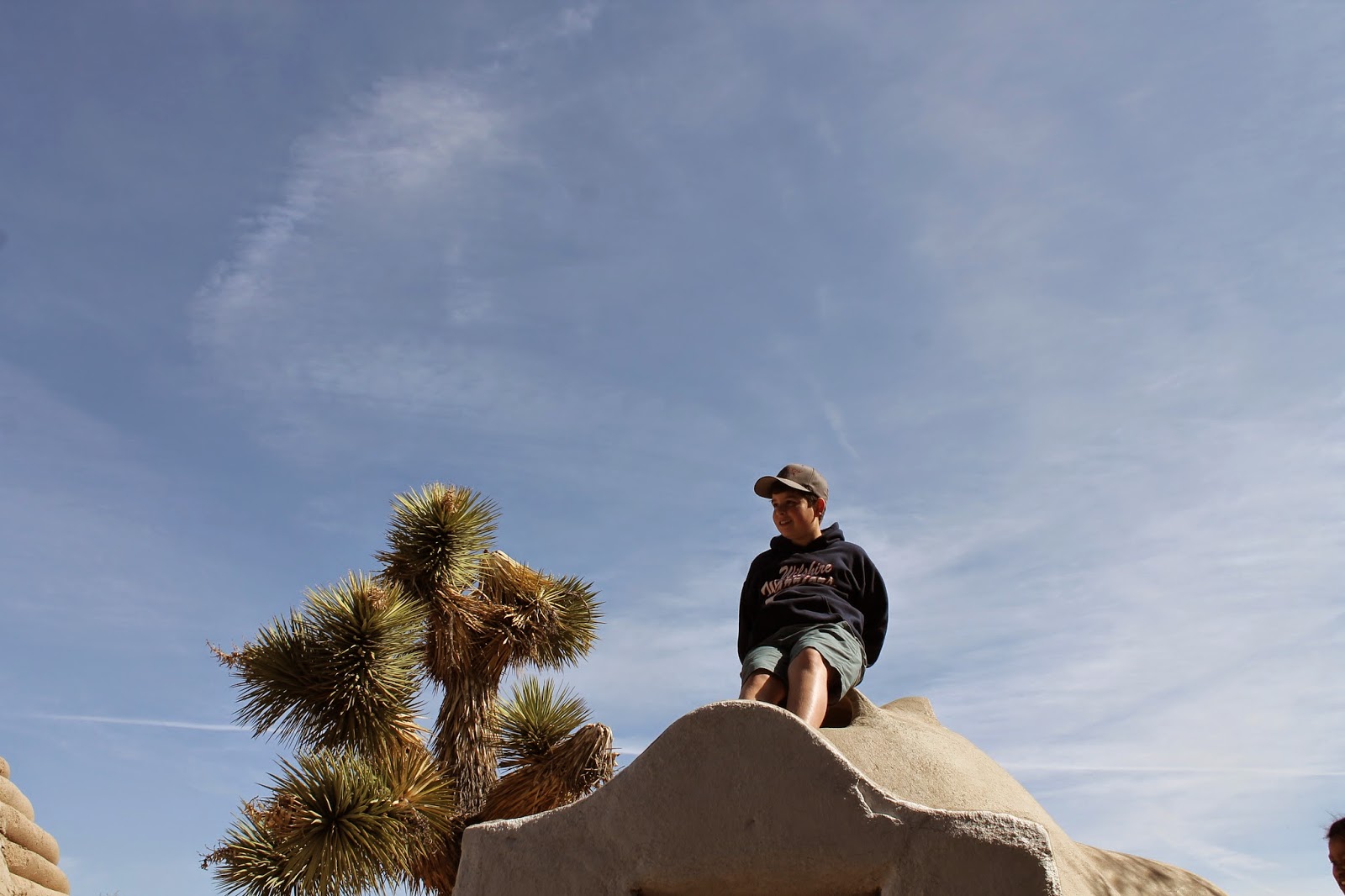 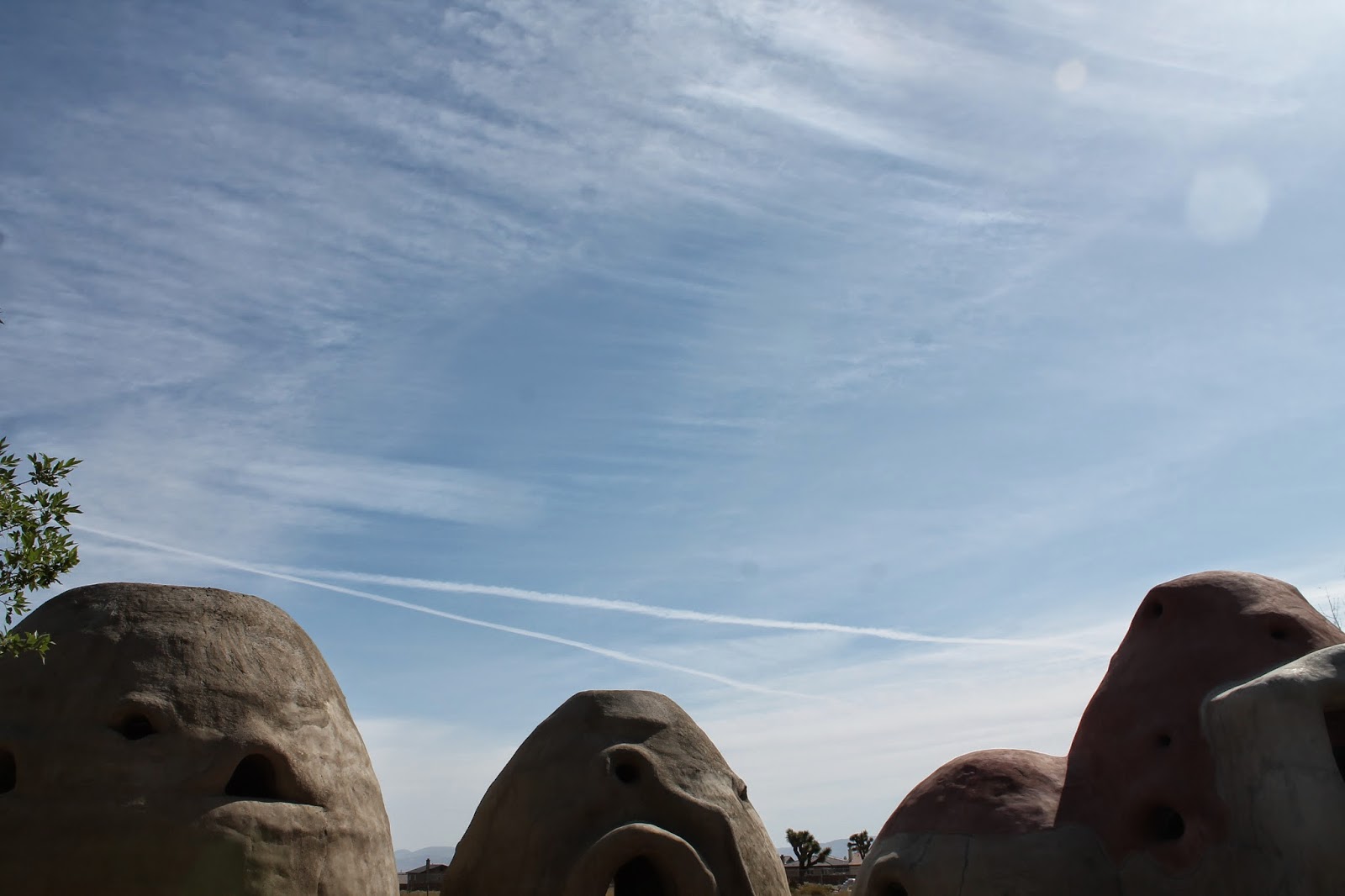 I was struck by the structures' simplicity and by their great beauty. The director and the young interns on the site demonstrated that any family can construct using these principles on their own, in a matter of hours. The more sophisticated structures would, of course, take longer, but they, too, were a marvel of simplicity and stark beauty. 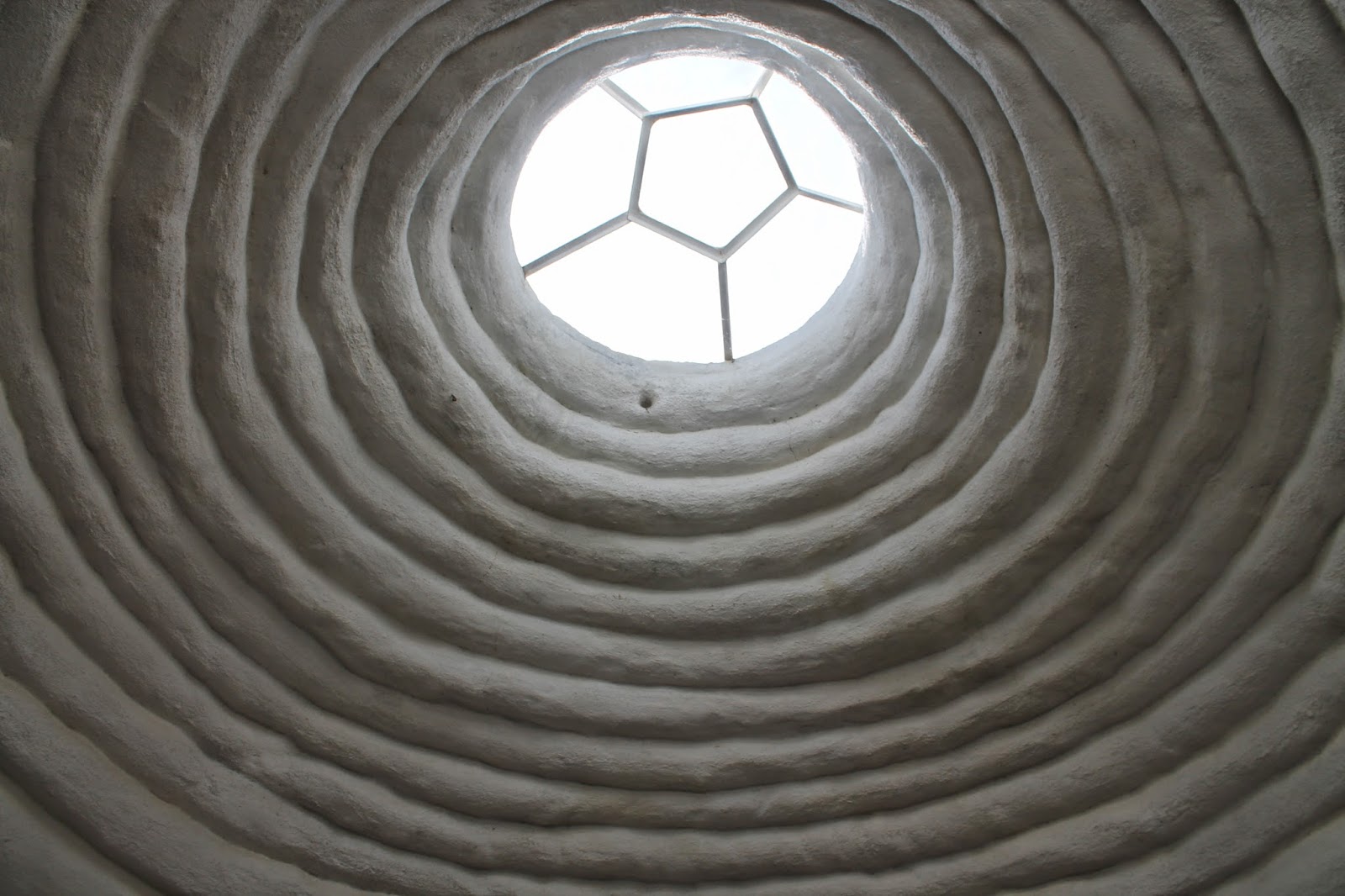 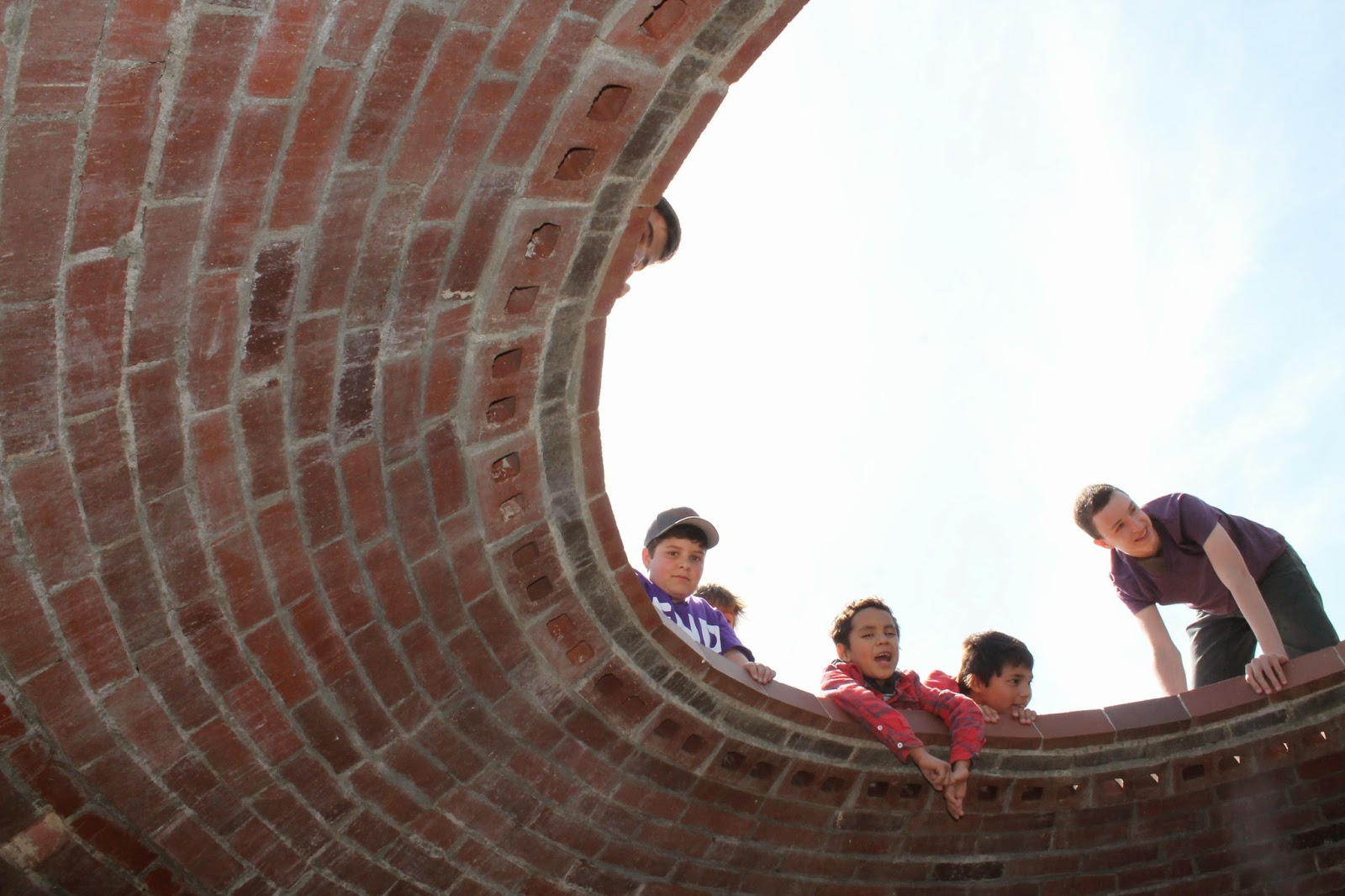 The photos, I think, speak for themselves. Throughout the day, it was impossible not to think about and to reflect upon how privileged we are, how grotesquely we exploit the world's resources here in the United States and how out of touch we are, as a rule, with our environment. 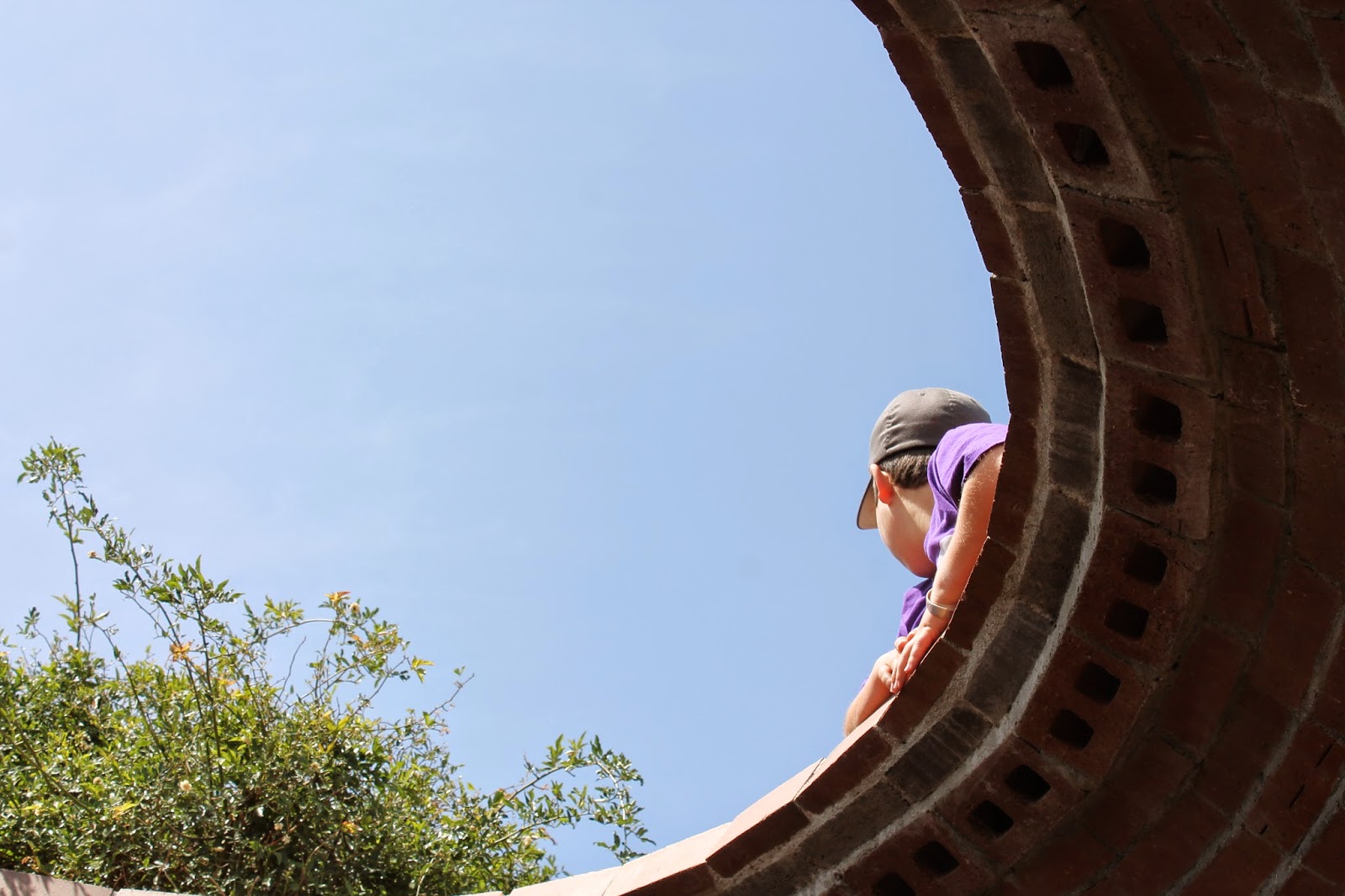 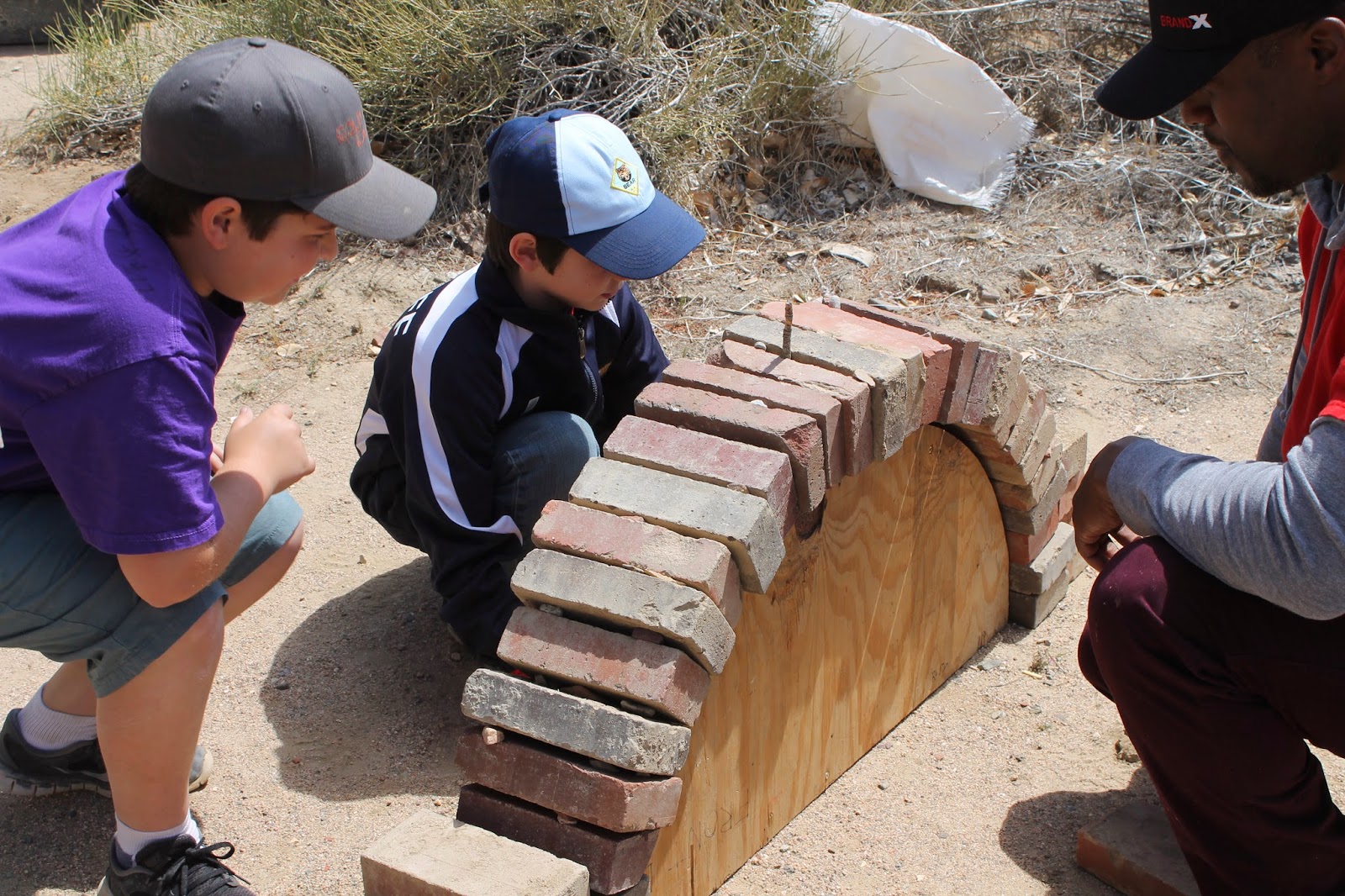 An arch is like a prayer
its strength is in its unity
its beauty in its repetition. 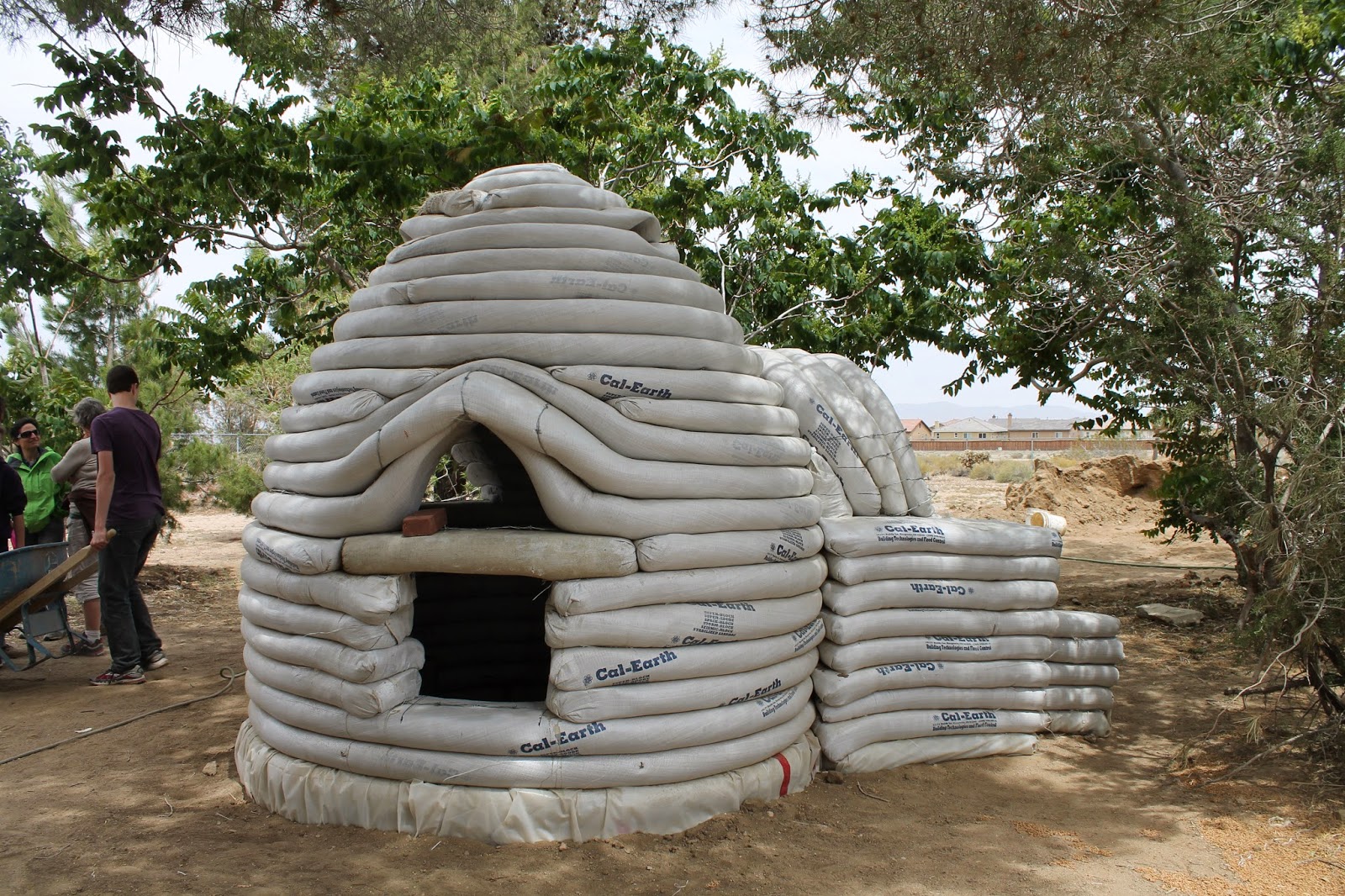 Those bags are filled, literally, with earth -- the same earth you see on the ground. They are tamped down, and then a line of barbed wire runs down the center of the bag, serving as a kind of Velcro and helping to anchor the bags. The structures are completely wind-resistant and remain intact through even the strongest earthquakes. 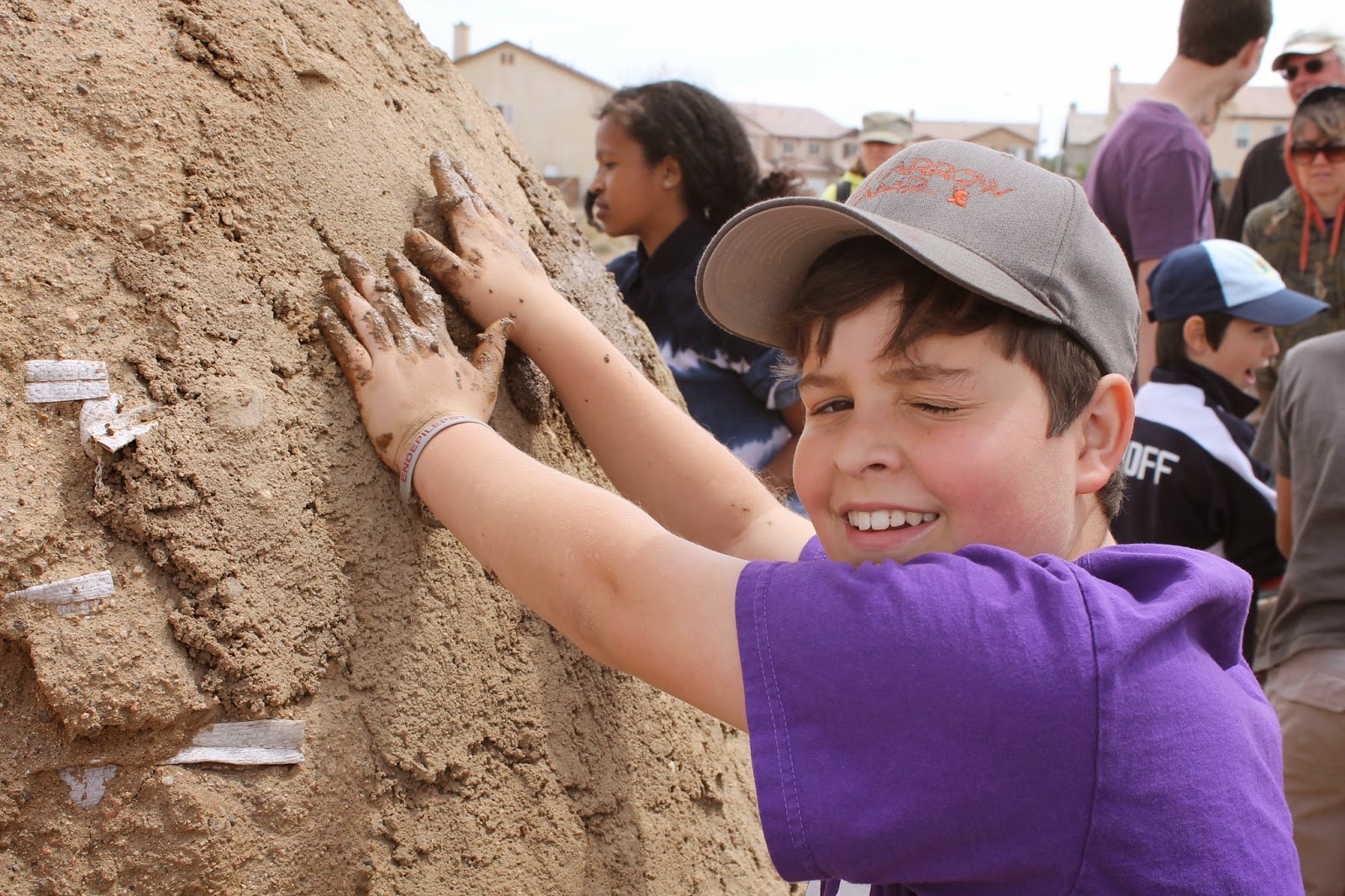 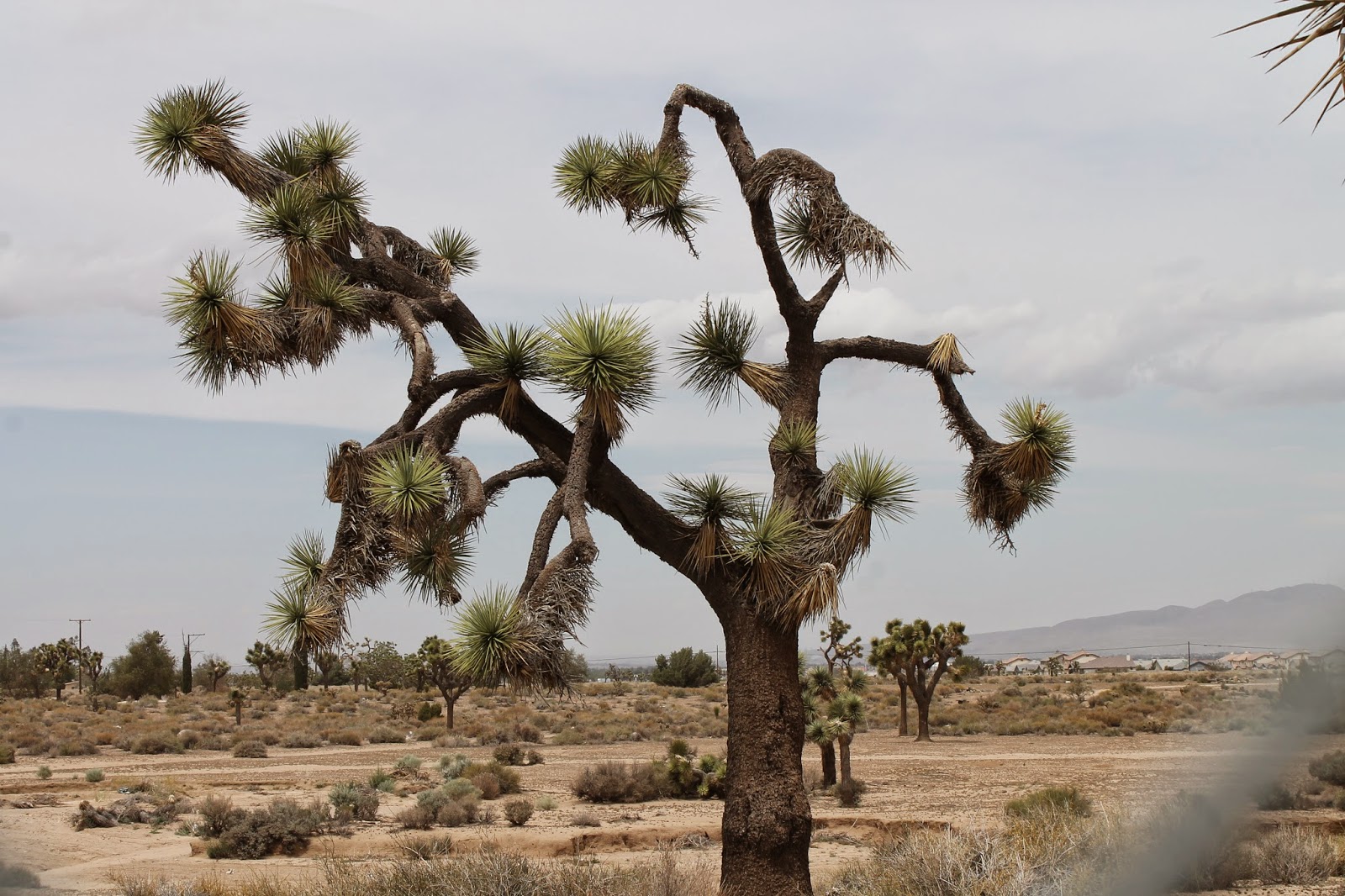