The Separation of State and Family: Notes on HRC, Feminism, Disability and Family 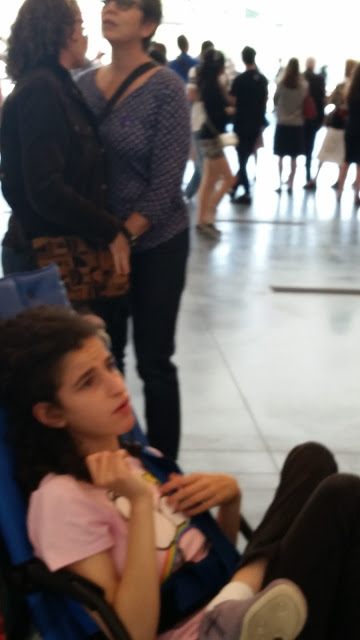 I haven't written too much about politics on the old blog of late, except for the occasional jab or rant and disbelief over Republican insanity. The main reason for that is the whole thing gives me agita. I also have no idea what's going on with them (the Repubs) and haven't even ventured to ask members of my own family what they're thinking and whom they might be voting for as Republicans because -- well -- I don't want to know. Separation of family and state, if you will.

I'm undecided about whom I will vote for in the primary, although I lean quite firmly toward Sanders. The reasons why are numerous -- they have to do with his positions on equality, on medical marijuana, on healthcare and education -- and while I understand people's reservations about Sanders' ability to do what he proposes, I'm more inclined to feel, at the gut level, that HRC stands for almost exactly what I'm not. In other words,  I'm not convinced that HRC is the right woman for the job, but if she should win the nomination I will of course vote for her because -- well -- really.

This morning I opened Facebook and read something by my brilliant friend Jeneva Burroughs Stone that I wanted to share in total with you. Jeneva is a polished advocate for the disabled, the mother of a disabled young man, a poet and non-fiction writer that has numerous degrees and public policy experience. She writes, as always, with the perfect combination of righteousness, knowledge and passion. You should know that we as mothers of the severely disabled speak for our children as well. I think Jeneva speaks for Robert, here, and I will echo her voice for Sophie, too.

Two articles crossed my desktop this morning that remind me why I cannot vote for Hillary Clinton in the Maryland primary. Both concern HRC and Melinda Gates' efforts to promote microfinance and close the time gap in unpaid labor--for third world women. Certainly, these efforts are admirable; however, only one of the articles pointed out the obvious--that while these efforts attempt to raise the ceiling for women, the Clinton welfare reform package, by shifting welfare to the states, removed the floor for American women. We are now "free" apparently, to fall as low as the states will let us.

I include myself because caregivers are also caught up in this mess of Medicaid waiver and state program block grant madness. Caregivers across the U.S. (mostly women who care for disabled and/or ill family members) face an ENORMOUS unpaid time gap. Many of us cannot work at the jobs for which we were trained, nor can most of us work full-time because we spend anywhere from 6 to 16 hours per day in unpaid caregiving activities.

Closing institutions is a great idea; however, no state offers 24 hour care at home, even for individuals who require 24 hour care, thus shifting unpaid labor mostly to female parents. When I talk about "caregiving," I'm not talking about "parenting." Those are two different things. It would be fabulous if I actually had more time to be Robert's parent, as opposed to his caregiver. Caregiving involves hands-on personal and medical care, as well as the reams of paperwork, emails, phone calls and accountability tasks required to coordinate the various programs that serve any person with disabilities. In addition, there are significant time burdens associated with accessing treatments, maintaining prescriptions, communicating with multiple physician offices, etc.

And I don't want a "program" that pays me to do this, unless that program is willing to compensate me at the wage I would earn for doing work for which I am trained, which is about 10 times minimum wage, and 3-4 times the current wage for a home health aide. Otherwise, we're looking at a wage gap on top of a time gap. And don't get me started on the fact that the caregiving support I DO have is primarily from female workers who are paid very little for skilled labor. Yes, I live in a state that's willing to supplement the pay of construction workers by an enormous amount, but won't pay a female LPN a reasonable wage. More comparisons--yes, I rent an office to get away from the house and get some work done. Is it a luxury? Maybe. But my rent is $440 per month. At a minimum cost of $50/hour, I would be able to purchase less than 30 additional minutes of nursing care per workweek day with the same funds.

HRC and Melinda Gates seem willfully ignorant of the problems working-class & poor women, as well as female caregivers face in terms of the unpaid labor gap. More "programs," especially at the state level, are not the solution. We don't want "help." We want equality. We want government and society to recognize a civil commitment to all citizens to reduce inequality. As one journalist pointed out--the Gates Foundation wants to pay for cell phones for women in third world countries, but who's paying for cell phones for poor women in this country? Who pays for long-term caregiving in this country? And who's paying for it in third world countries?