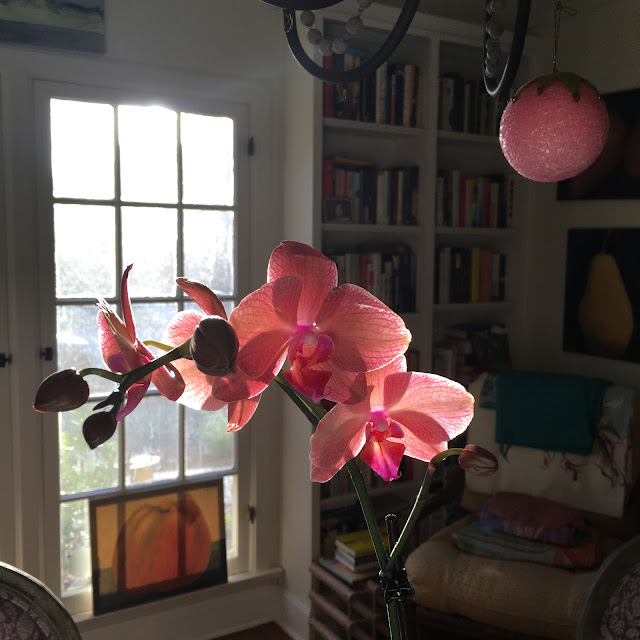 Enough ranting and raving. Whew. It's been a weird few days, no? I told my good friend Tanya that I've got a million things going, but I don't feel like I'm doing any of them well. I'm half-assed, I told Tanya. I wish that expression could be literal as well as figurative, but my exercising is half-assed as well.

Today, though. Today. I kept Sophie home from school because she looked exhausted. She's been wakeful in the night, and this morning I found her stretched out on the floor of her room sleeping so soundly that even as I lifted her back into her bed and covered her up, she stayed asleep. I was able to work most of the morning at my New Job while she slept into the afternoon. I opened all the doors and windows and let the sun shine inside. Glorious southern California winter. In the late afternoon, I began making dough for cinnamon-raisin bread. It was just about the most perfect dough I've ever made, white and soft and satiny and flecked with golden raisins. I did what's called a business letter fold and put it into a ceramic bowl, brushed some oil over it, covered it with plastic wrap and put it inside the fridge. It can stay there up to 24 hours, so sometime tomorrow I'll pull it out and shape it into loaves with a cinnamon swirl. Working with this dough made me feel whole and full-assed (what I am quite literally, too), and I wonder why it's been so long since I've done any baking. A neighbor came over at the point where the dough was coming together in the mixing bowl, and when I exclaimed over it, she claimed that she just never got into baking. She's an incredibly good cook, but she doesn't like measuring. I think people either like or don't like baking, and they generally have an intuitive feel for doughs and batters or they don't. I have always been a baker -- since I was a very young girl, and pretty much everything I've ever tried (bread, cake, pie dough, French pastry) comes out pretty decent. I'm grateful for that.

I'm grateful, too, for the sun and the orchid and the pink sparkly ornament from my childhood that hangs from the chandelier. I'm grateful for my friend Tanya for joining me in half-assery and for my friend Debra with whom I spent last evening. We watched a beautiful documentary about the photographer Sebastio Salgado called Salt of the Earth.* It made me glad to be alive right now on this planet, today. I urge you to find it and watch it, be transported out of this ugly old world into this beautiful world.

*Here's the link for the trailer.

Posted by Elizabeth at 8:20 PM