You thought we would never change 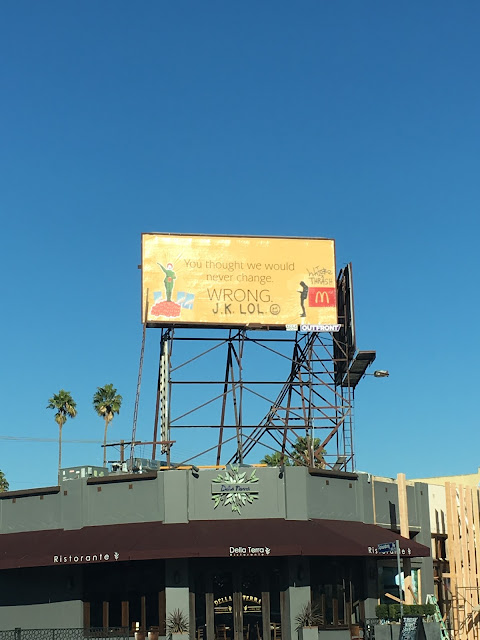 I didn't know what kind of photo would be a good lead-in to a post that includes my selection of country to live in should That Businessman Who Won the New Hampshire Primary go on and win the presidency, but yesterday as Oliver and I drove around the big shitty, we looked up and noticed this example of graffiti at its finest. Do ya'll have these McDonald's billboards everywhere in your little or big shitties that declare some big change that's coming? Evidently, McDonald's is about to change, and we sure don't know in what way. Are they going to be paying their workers as much as their executives? Are they going to use only organic, grass-fed beef? Are they going vegan? Are they swearing off sugar sodas? Are they going to stop exploiting third world countries? Are they going to work in earnest to reverse the travesty that is the American diet and food/agriculture system?

In any case, the graffiti artist known as Thrasher (according to one of my dear friends, this person unfortunately defaced her property several months ago) has answered the question quite well.

As I type this, I realize just how perfect that photo is -- you know -- the McDonald's, The Donald, etc.  for this post. Sweet Jesus, I wish we could just all text each other laughing emojis and text JKs and LOLs after yesterday's primary in New Hampshire.*

Remember back in the good old days of Romney/Obama when folks of a certain political persuasion kept whining how they wanted their country back?

Yikes. I know how they feel.

Mary Moon at Bless Our Hearts suggested we all start thinking about what country we might want to live in should That Businessman win, emphasizing that Mexico would work because of that wall that The Businessman would erect that would not only keep the Mexicans out but would also serve to keep those Americans that voted for The Businessman away from us as well. Hmmmm. Mexico? I'm still hankering for a trip to Bora Bora, to tell you the truth.  I imagine I could still work My New Job from such a remote location, and Sophie would love living in a little hut over the ocean. I do love this country, but I can't say that I love the people in it that would vote in a primary for such a hateful, ugly fool. There. I said it.


Now I'm going to do a little research and see if McDonald's has conquered Bora Bora, yet. If not, you'll know where to find me.


*I'm talking about the results of the Republican primary, of course. If you're a new reader, you should be aware that this is a COMMUNIST site. As for the Democratic primary, I'm not ready to commit but am leaning toward the one whose name rhymes with Flanders.
Posted by Elizabeth at 4:57 PM