Down the street and around the corner - an Update 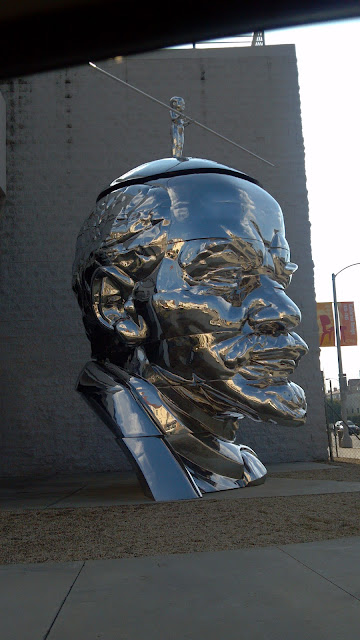 
This huge Vladimir Lenin popped up overnight this past weekend at La Brea and Fourth St., outside a building owned by Ace Gallery (a Banksy appeared on and was removed from a wall there in 2010). The piece is "Miss Mao Trying to Poise Herself at the Top of Lenin's Head" by the Chinese artist brothers Gao Zhen and Gao Qiang and it caused an uproar at the Vancouver Sculpture Biennale in late 2009. Blog Fairfax By Night first spotted the sculpture and explains "With a vivid chrome finish, the metal sculpture is constructed from horizontal sections that were purposefully staggered...As such a well known person, the artists' decision to give his face a chrome finish takes the focus away from Lenin, and to the sculpture's context by allowing the reflections to highlight the immediate surroundings instead of Lenin..." In this case, of course, that's a slightly blighty intersection on a drive-through section of La Brea.

Posted by Elizabeth at 8:38 PM