How We Do It - Part XV in a series 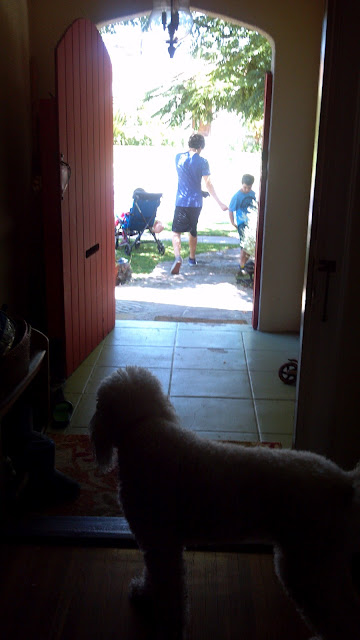 Sophie's hands were clammy all day and I'd say that clammy hands and feet, along with drooling, come in second behind seizures as most disturbing elements of a life. One means the other and the other means one, and we'll never know for sure what comes first or how to make it stop. We were sitting at the kitchen table eating dinner, Sophie tilting to the left as if her bones had come undone, clammy hands and feet and un-knit bones, an unseen seizure, did it come first or after but never mind, we're not used to it and rather annoyed by it, the boys and I, sometimes. No less Sophie, who is floating, I'm certain, clammy, her mouth a bird's barely open, hungry, plaintive in a speechless way. I spooned food into her mouth and listened to her brothers, their talk as concrete as Sophie's un-knit bones and vowels and clammy hands slipping. I moved my eyes to their's and in the moment it took to look, Sophie's own eyes rotated to the right and upward but in that same moment, the moment that I looked at the boys, I saw her eyes, too, and I said, loudly, STOP SOPHIE, NO, SOPHIE, STOP SOPHIE, NO SOPHIE, as my eyes rotated from the boys to hers and hers rotated away from the right, back and stared right into mine. Eyes were all rotating, and the pause that made room for my shout ended, and they were talking again and I said, Did you see that, guys? I stopped it. I got it just in time, did you see that? Good job, Sophie, I said, we didn't need that one. Oliver put his food down and rotated his eyes upward and around and said, That was A-MAAAAZING, MOM. You're a miracle maker, and then I giggled and rolled my eyes.
Posted by Elizabeth at 7:00 AM

Email ThisBlogThis!Share to TwitterShare to FacebookShare to Pinterest
Labels: epilepsy, Henry and Oliver, How We Do It, seizures, Sophie