Not a creature was stirring, 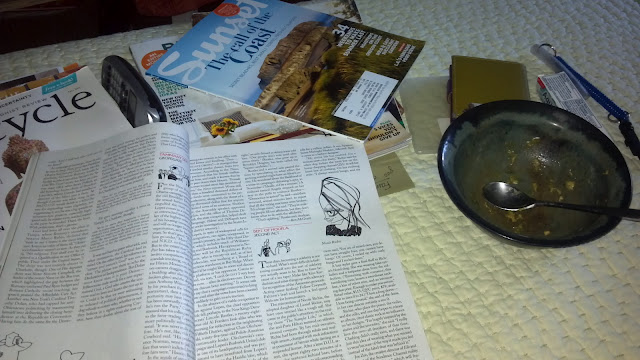 not even two boys, The Husband or Sophie.

Everyone is gone, and I am alone in my house with a bowl of macaroni and cheese and a stack of magazines.

I've dusted and straightened up the house. I've placed papers and bills and mail in tidy piles. I broke up a fight that included punching, flailing, a choke-hold on the bed and much screaming between Oliver and Henry over Henry's "lost" wallet. Accusations flew, blame was placed, the wallet has mysteriously disappeared, despite the fact that it has two one hundred dollar bills in it, bills that I had gently suggested were better off in my safe-keeping, but who listens to their mother?

Still in my pajamas, cross-legged on my bed, I am feeling a bit like a real Hollywood star, taking it easy before the big show.

Excuse me, now. I'm going to rest my eyes.